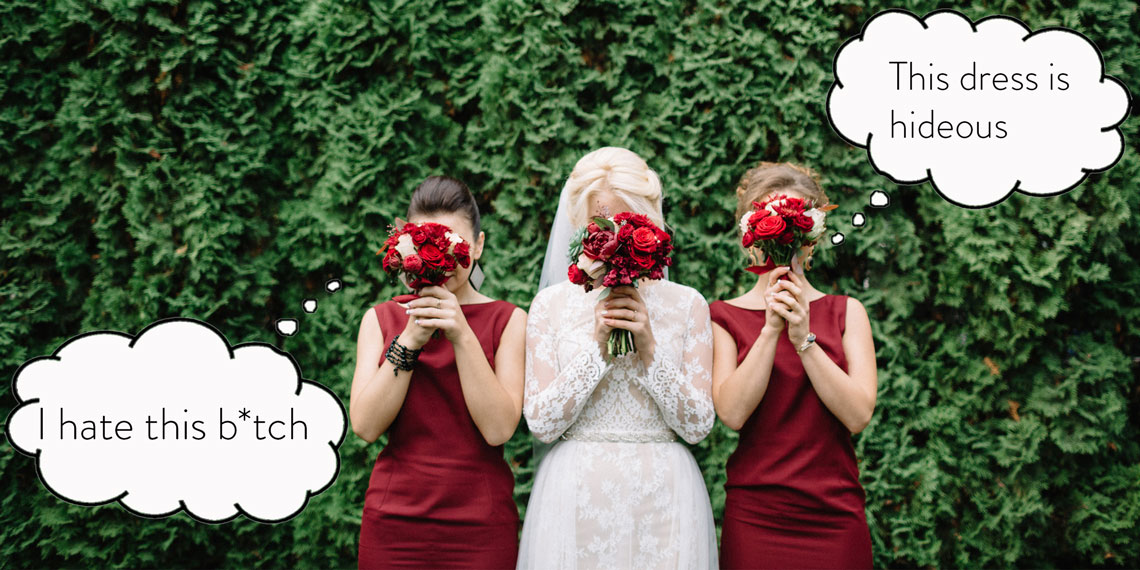 There is a certain level of bride etiquette that seems to be overlooked. On the one hand, being asked to be a bridesmaid is an honor. That means you are a first-tier friend. You also get to do all the fun stuff like bachelorette parties and bridal showers. You get to help the bride pick out her dress. And you get to go to the wedding, with free food, and hopefully an open bar. It’s a big deal. (Also, if your friends don’t have an open bar at their wedding, they are pure fucking evil.) On the other hand, you’re going to spend a shit-ton of money for someone else to get married, and likely wear an itchy tulle pastel monstrosity that you’ll never wear again, that will cost you hundreds of dollars, with matching strappy sandals that will cut off your circulation.

As Maid of Honor in my best friend’s upcoming wedding, I’m an expert in how a bride should behave so as to not piss off her friends and to still have them once this shit is over. I’ve been a bridesmaid a few times now and there are a lot of ways to go wrong. Here’s how to bride correctly.

1. Don’t Be A Bitch About The Dress

Chances are your bridesmaids aren’t going to all have the same body type. If you’re dead-set on all your friends wearing the exact matchy dress, you’re going to have a hell of a time finding one that fits everyone. Usually what will happen is that you’ll all settle on a dress that everyone hates equally. It’s just impossible to fit skinny Sarah with no breasts and your morbidly obese cousin in the same garment and call it flattering.

If, by some miracle, you find something that looks decent on everyone, it will probably be really expensive and still no one will look amazing. This is why many brides opt for different styles in the same color. Honestly, your bridal party will look better if everyone is comfortable and wearing something that fits well. I once had a bridesmaid dress that gave me a fucking rash because it was so itchy and it straight-up shanked another bridesmaid because the fit was so awkward on her. There was blood. Don’t do that.

If you really want to be a good friend, pick a dress that is at least cute enough to wear again—either going out, or maybe to another wedding. It justifies the price more if it’s not a wear once kind of deal.

2. Pick Where You Want Your Friends To Spend Their Money

Speaking of dresses, being in your bridal party is fucking expensive, and while we’re all excited to be there with you, you need to consider how much we’re spending for your wedding. Not our wedding. Just YOUR wedding. That murderous pastel dress cost me $300, and you can bet that shit went straight into the trash afterwards. Look, you can pick a pricey dress if you want to. But then maybe have your bachelorette party somewhere you can drive to instead of making us all fly across the country. Or maybe have a small bridal shower in your friend’s backyard instead of renting out a venue. Whatever is most important to you, make that the big event and save elsewhere. Try to think of how much your bridesmaids will be spending total on all of these events—not to mention, they still have to get you gifts for all this shit, too.
Also? If you want your bridesmaids to all be in Louboutins, you totally have that right, but you better be fucking paying for it. Same goes if you want a super expensive dress—at least pay half out of your wedding budget. You want us all to have our makeup and hair done by someone who charges $200 a piece? You pay for it. You don’t need to fuck your friends over who are probably drowning in debt just because they want to help you celebrate. Don’t be an asshole.

3. Don’t Go All You-Can’t-Sit-With-Us For The Bachelorette

The bachelorette party is basically the whole point of getting married (to me, at least) and it’s the most fun part of being a bridesmaid. However, booking a huge trip like this can get really expensive fast. You can majorly cut cost by inviting friends outside of the bridal party to join. It’s so much cheaper and more fun to invite more people anyway. And also? Have you ever tried to plan a huge trip with more than three people? Half those fuckers bail last minute, most of the remaining will conveniently “forget” to pay for four months, and those who make it will insist the price was lower than what you agreed on, even though you have it in writing. Anyway.
Inviting second- or even third-tier friends who are a good time to the bachelorette means you have backups for when people flake, and it’ll keep the cost to a minimum, especially if you’re renting hotel suites in Vegas or a house in Cabo. Also, it resolves a lot of the drama if some of your friends were cut from the bridal party list. They still get to be in it for the best part.

4. Don’t Be A Dick About The Gifts

Your friends are already spending so much money on everything else. Yes, it’s still expected they give you gifts. But between all the other expenses and engagement, wedding, bridal shower gifts, etc, we’re already fucking broke. Also, chances are the rest of your friends, those not in the bridal party, are poor, too. Our economy is bad and none of us have real jobs. It sucks. And yeah, it’s expensive to invite people to your wedding, I get that. It’s like buying 200 people dinner at a nice restaurant. But you chose to do this—your friends did not. They are only coming to be supportive (and for the open bar).
So make sure you have a whole price range of gifts on your registry. Ask for whatever you want, even really expensive things—that is totally fine, as long as you also have affordable or even straight-up cheap options. Let real grownups like your great aunt you never see buy you the $700 china set and let your poor bridesmaids get you …something… they can afford after shelling out hundreds for all your other shit. I couldn’t even think of something to put that is cheap for a bridal registry. What do brides register for? Blenders? Napkins? Unclear.

This can make or break the bridal party, so choose your Maid of Honor well. Your MOH is going to be in charge of organizing everything and dealing with every crisis you might have, so if you have a total flake as a BFF, maybe consider asking a more together friend to be MOH (or at least help the hot mess plan) so that everything doesn’t go to shit at the last second. If you’re one of those people that insists on having their sibling as MOH, and your sister is a complete moron, maybe ask a friend to be an honorary stand-in for all the planning. It’s a lot of work and it can be difficult to handle it all, so it’s totally okay to ask friends that love planning instead. And if you don’t want to hurt your idiot bestie’s feelings, just say that you know they’re soooo busy, so you’re asking Responsible Friend instead since she has more time. I once was in a wedding party where the MOH failed to plan anything and showed up to the bachelorette a day late. Out of a weekend trip. So she missed half the trip. Without telling us. And she tried to wear wedges and a sundress out to the clubs in Vegas. (Side note: you cannot do that, they will not let you in.)
She also showed up to the bridal shower in sweat pants.

So plan this shit out carefully, and hopefully when the wedding is over and you’re stuck with your husband/wife forever (haha jk, maybe like five-ish years before you get divorced and move on to spouse number two), you still have friends to complain about marriage to.
Images: Shutterstock; Giphy (3)