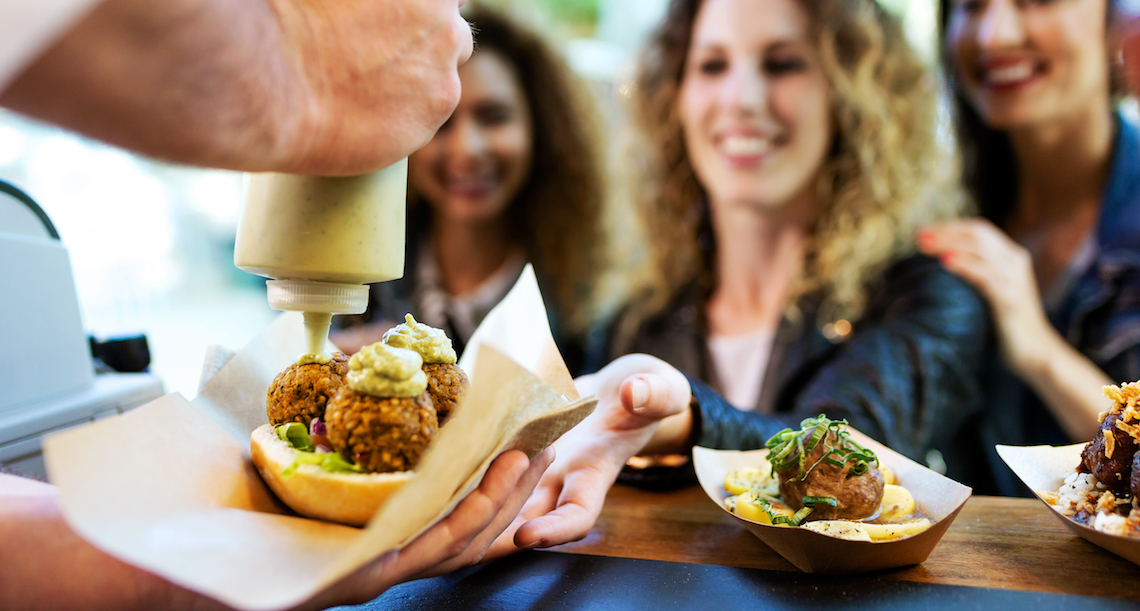 As we wave goodbye (and good f*cking riddance) to 2018, we look forward to the weird, fresh, and sometimes terrible trends to come in the world of food. Will we be inundated by raw everything? Are pomegranates going to be fetch once more? Will avocado toast be de-throned as the reigning basic b*tch breakfast? This year, we predict weed will be more mainstream, sea vegetables will adorn our plates next to motherless meats, and foamy delicious oat milk will grace our lattes. Sounds like it’s gonna be wild, so take a look.

Bet on seeing hemp milks and cannabis everything in the grocery store this year. Your stoner neighbor, Bob, will be v pleased since, he’s been telling you about the benefits of this totally sacred herb since he moved into your building two months ago. But seriously, the appeal of all things CBD and hemp is spreading, and food producers are getting in on the action. According to Whole Foods, CBD oil is still technically prohibited from being featured in food items, but that may not last long.

Sushi lovers rejoice, because seaweed is totally going mainstream this year. According to Forbes, “Expect to see seaweed butters, kelp noodles, puffed snacks made from water lily seeds, plant-based tuna alternatives made from algae, crispy salmon skins and kelp jerkies.” I’m going to go ahead and move kelp jerkies to the absolute bottom of my “try” list, but all that other stuff sounds at least kind of fun.

We probably shouldn’t be calling stuff grown in a lab “meat”, but here we are. According to the New York Times, KFC and several other meat giants are already throwing money at “motherless meat”. I’m really not sure how I feel about this, but theoretically it’s better for the environment, as well as being more ethical. You know that vegan burger that totally “bleeds” when you bite into it? Look into your future.

Romaine cut us deep this year and betrayed our trust one too many times. The big E. coli scares have actually pushed chefs and home-eaters to try new types of lettuces from Bibb to Little Gem. The trendiest, though, will be lettuces grown hydroponically and/or on urban farms. Don’t ask, because I’m not a scientist.

It all started with Activia and Jamie Lee Curtis telling us we needed her yogurt to help us poop more. Sure enough, more and more of us are turning to things like kimchi and kombucha for a healthy crap factory. This year, we’ll see even more pre- and probiotic rich foods, all aimed at keeping our microbiome in healthy working order.

I’ll let you take a minute to digest the whole insect protein thing. About 80% of the world eats bugs in some form, and Americans have been behind for awhile. Look for cricket flour (really) in your local health food stores this year. Apparently, the roasted, ground, and milled crickets make for a yummy, nutty flavor profile. Still gonna be a no from me, dog.

Hopefully this trend will help and not hurt the already dwindling bee population (#savethebees fam). Victoria Beckham has claimed for YEARS that bee pollen is what gives her that #glow, and she may be on to something. Bee pollen is an amazing source of anti-inflammatory antioxidants and, according to early studies, may help in reducing cholesterol and healing cuts and bruises.

What do you get when you combine vegan eating and paleo diets? Peganism, and it’s as stupid as it sounds. This shouldn’t surprise any of us, what with literally all of our coworkers telling us how much better they felt once they cut out bread, pasta, and happiness. Combine that with veganism, which–fun fact–you’re required by law to tell everyone about within four minutes of meeting them. 2019 is gonna be LIT.

Get ready to replace your almond and soy milk with oat milk. According to Nation’s Restaurant News, “Dairy-free, nut-free, possibly gluten-free (depending on where the oats are processed), this milk substitute is drawing fans with its texture that’s creamier than most of its counterparts. It also has more protein than nut milks (but less than soy milk or actual milk) and more fiber than any of them.” So, now you can make your overnight oats with actual oat milk, which is like, so meta.

We’ve found a new cuisine to hopelessly exploit! How many fruits can we make go extinct in 2019? Pacific Rim refers to places like western North and South America, Asia, and Oceania, which seems rly broad, but I don’t make the food trend rules. According to Whole Foods, “Ingredients like longganisa (a Filipino pork sausage), dried shrimp, cuttlefish and shrimp paste are on restaurant and home menus that span from breakfast to dinner, while vibrant tropical fruits such as guava, dragon fruit and passionfruit are making their way into colorful smoothie bowls and cocktails.” Let’s take bets on how long it takes for Americans to wipe out dragon fruit while on the quest for delicious smoothies.