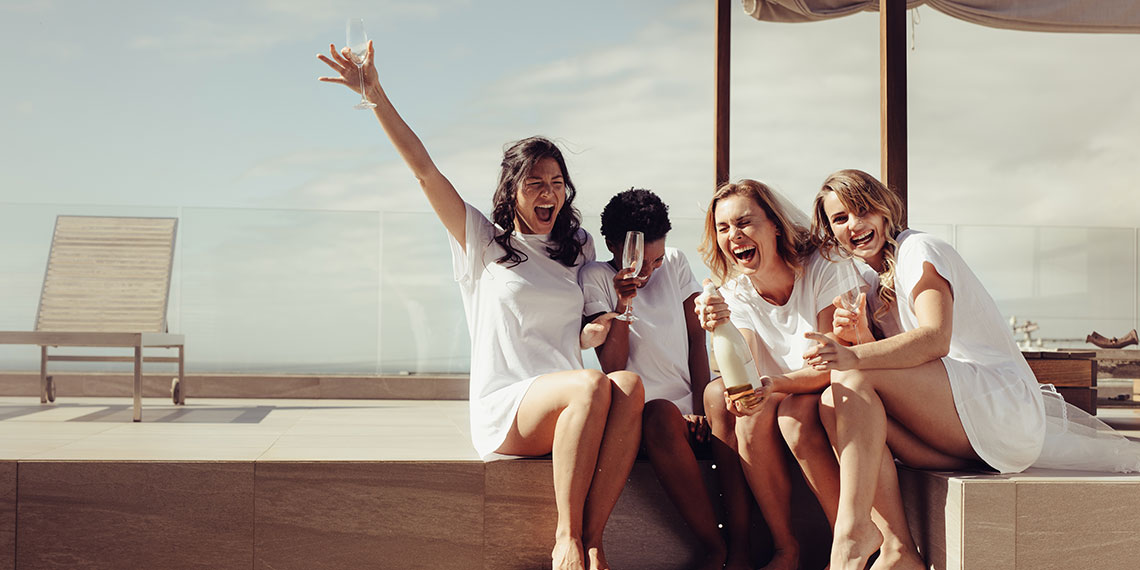 WTFunds: How Much Do Bachelorette Parties Cost?

As if being a twentysomething in 2019 wasn’t hard enough already, about halfway through a decade full of major changes, financial independence, and student loan repayment, life offers yet another thing for you to go into debt for: wedding season. Whether you are the bride, the bridesmaid, or just a lowly guest, your priorities after 25 start to look a lot less like student loans and happy hours, and a lot more like wedding gifts, destination flights, and ugly dresses. Before you swear off having any friends (and therefore, nuptial obligations), we have some good news on the pre-wedding front. You can breathe a sigh of relief, because it might not be expensive as you think—at least for the bachelorette party.

WeddingWire just dropped a new study* on bachelor and bachelorette parties (because people study those, apparently) and, unlike most new information on wedding festivities, this one isn’t a total bummer for your finances! As it turns out, Instagram tends to exaggerate the extravagance of the pre-nuptial parties (shocker!), and everyone your age isn’t emptying out their life savings to fly to the Caribbean for all their friends’ bachelorette parties (though the same cannot be said for the heinous bridesmaid gowns they have to shell out their cash for). What’s more, women are actually likely to spend less on the bachelorette than men are on the bachelor party (to which I reiterate: bridesmaid dresses, we’ve earned this). Rest assured that you can have your Chippendales stripper, and throw money at him too (though I recommend sticking to throwing singles. You’re not a millionaire).

Feel this deep down in our souls | credit: @lexniko

Whether the festivities be the always-popular club scene or the more laid back spa day, women on average are only dishing out around $708 to celebrate their girlfriends’ last days of singledom (men spend $1,044 on average). That’s a lot of money, but somehow, not as much as I would expect when you consider airfare, hotels, entertainment, etc. This is, in part, a result of most parties remaining local. 92% of bachelor and bachelorettes remain in the U.S. and don’t last longer than 2 to 3 days. Again, contrary to what Instagram would have you believe, most bachelorette parties aren’t whipping out their passport. Sure, some women splurge a bit more and bathe in the sun with their betches on the coasts of the Caribbean or Mexico, but most stick to the following U.S. bachelorette party destinations. In order, these are WeddingWire’s most popular bachelorette party spots:

Bachelorette party gifts tend to remain on the cheap side as well. In order to celebrate their bestie’s commitment to sleeping with one man for the rest of her life, most women go with the tried and true gifts of lingerie and sex toys. But honestly, can we just pause for a moment and contemplate the thought of your friends picking out lingerie for you? I don’t want them picking out my outfits, let alone my underwear. That said, underwear looks like a dream next to the typical bachelor gift of… drumroll please… outdoor gear. I guess it’s better than strippers, but unless your man is like, a bear hunter or something, please take the time to reevaluate this union if his boys gift him a fishing rod or a tent or something.

⭐️ GIVEAWAY ⭐️ Because weddings are expensive AF and the clothing that goes along with it is even more expensive, we are giving away 3 free months of @FashionPass for one bride to be and one free month for each of her bridesmaids. If you aren’t getting married, enter anyway & we will treat you and 4 of your girls. Winner will be able to activate the month whenever best suits them (think bachelorette party, bridal shower, etc). Steps 👉🏼 1. Follow @betchesbrides & @fashionpass 2. Like this post 3. Tag your bridal party or 4 friends in the comments Winner will be announced on Wednesday, August 14 at 6pm EST.

No matter what you end up doing or gifting for the party to end all (single) parties, try to kick back and enjoy one of the best aspects of getting hitched. And if you find yourself in a financial stress spiral thinking about all of the student and wedding debt you have to pay down after the fact, take another shot and stuff another bill in that stripper’s jock strap.

*The WeddingWire 2019 Bachelor & Bachelorette Study is based on data collected from more than 1,000 respondents who attended a bachelor or bachelorette party in the last 24 months.