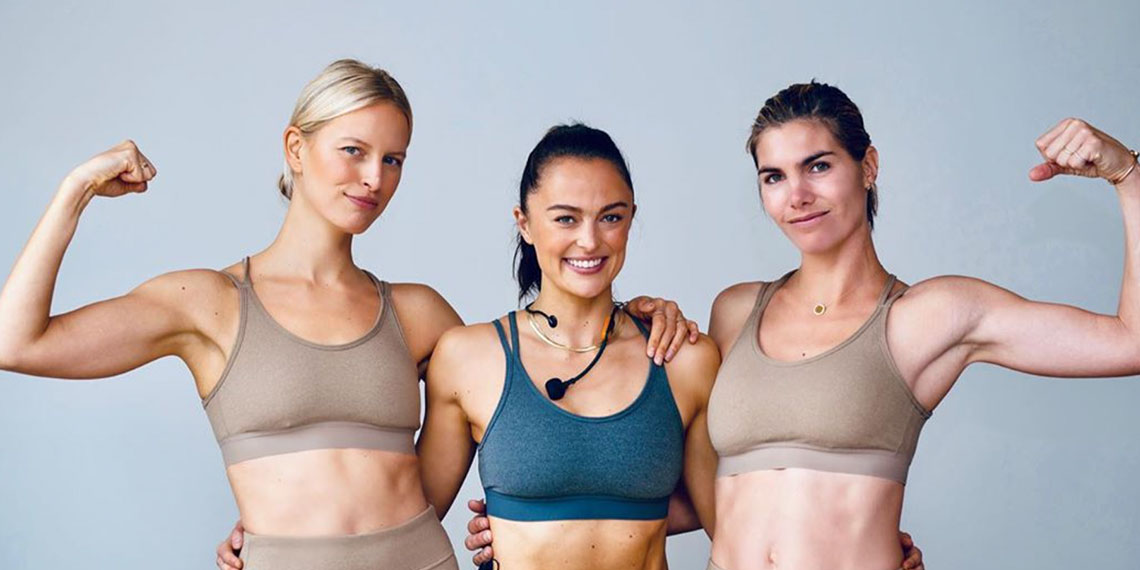 WTF Is The Sculpt Society, The Workout That’s All Over Instagram?

‘Twas a dreary hungover Sunday when I decided I needed a new workout to help drag my ass out of bed. I had seen The Sculpt Society tagged in a bunch of Victoria’s Secret models’ Instagrams (yes, I’m a masochist for following them), which led me to try it myself.

The workout started with a dance cardio routine (have I humble-bragged that I was a dancer yet? I was totally in my element), went into some arm exercises with light hand weights, transitioned into some leg and ab sculpting using sliders, and then finished with a leg/butt routine that absolutely killed me (in the best way possible). Despite my nausea from the 3+ margaritas I’d had the night before, I left the class feeling super accomplished—without that icky sense of “I hate that I just paid to have a psycho in leggings and a bra yell at me.”

Megan Roup, the founder of The Sculpt Society, is fortunately NOT a psycho in leggings and a bra. Working as a professional dancer and fitness instructor for six and a half years, Megan saw a gap in the dance fitness space. “There was so much intimidation around it. I thought, it doesn’t have to be like that!”, explains Roup. “I wanted to create a safe place that feels warm and welcoming and like you’re part of a community.” After a ton of hard work, certification training, and practicing rounds of sequencing on her boyfriend (he must have a great ass at this point), The Sculpt Society was developed. Models, influencers, and celebs like Arielle Charnas (who Megan credits as her “big break”), Elsa Hosk, Devon Windsor, Shanina Shaik, and Morgan Stewart became fans, and the class took off from there.

But don’t let the fact that legit models are taking this class scare you—Roup is constantly reminding everyone that “there are always ways to modify to feel successful.” Any exercise can be made easier, and you can always use lighter hand weights or no weights at all—so it’s completely customizable for whatever level you’re at.

Me: I mean, I’ve never had to modify since I’m a hard-o but I’m sure it’s a great option for other people.
Also me: Can’t remember the last time I used the ankle or hand weights.

Since all the people, models, and influencers I just mentioned are kind of intimidating, I had to question if The Sculpt Society was really staying true to its roots of being an approachable workout class for women at all different fitness levels. Roup totally gets this, though, which is why she likes to highlight people of all shapes and sizes on her social media accounts. “I don’t want to perpetuate one way to look,” she explains.

Love that, thank you! Like, do I want to look like the Victoria’s Secret models you train? Yes. Is it going to happen for me? Hahahhah, no. (I like bread too much.) So, I love that Roup features people like Hunter McGrady both on social media and on her new app where you can take The Sculpt Society workouts ANYWHERE. I personally started with the 7-day free trial and am now paying the $19.99/month to continue. It’s the best workout that I can do right in my living room with zero equipment necessary. Lord knows no matter how many New Year’s resolutions I’ve made to go to the gym in the winter, it’s not happening and it’s really time for me to face the music and find a better solution.

You can experience The Sculpt Society for yourself at Energi in NYC, Studio B in LA, and of course on the app. (Sidenote: Megan told me that she filmed all the routines for the app in two days only. Those are 10 hour days. Can you imagine being strong enough to literally workout for 10 hours and not being able to cheat a workout because you’re being filmed? The horror).

No matter how many times I take the class, I still feel my muscles working so hard throughout it and am usually sore the next day. I know what you’re thinking, “this betch (me) is just weak AF,” but calm down, Roup actually relates. She said she is “dying” every class too, and for that, I applaud her because I truly cannot imagine how many times she’s taken/taught her own class since its inception three years ago. I’ve also gotten comments that my butt looks bigger since I’ve started, so there’s no turning back now! Appreciate you, The Sculpt Society.