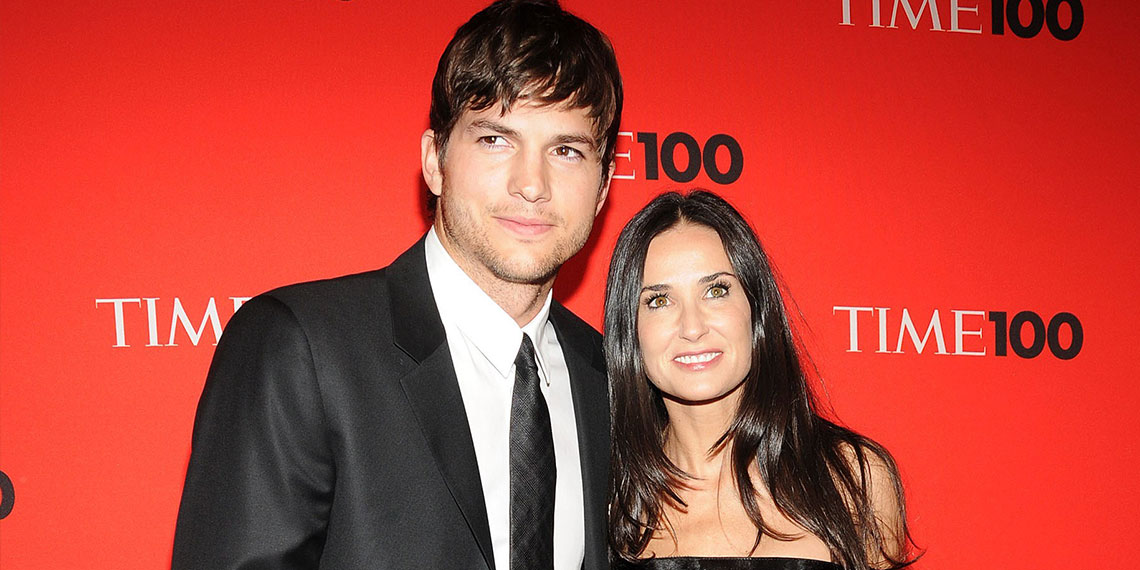 WTF Is Going On With Ashton Kutcher & Demi Moore?

Ashton Kutcher and Demi Moore have been divorced since 2013, but the drama of their marriage is once again making headlines. Sh*t hit the fan with the release of Demi’s new book, Inside Out, but the details of the couple’s drama aren’t juicy and fun in a Bachelor/reality-show-mess kind of way, but rather in an invasive-and-left-me-feeling-like-I-eavesdropped-on-something-that-I-shouldn’t-have kind of way. Demi Moore’s memoir, which was released on September 24th, details Moore’s very tumultuous childhood. In her prime (a phrase steeped in ageism and misogyny, but whatever), Moore was the highest paid actress in Hollywood and nicknamed “Gimme Moore” by men who should just go shave their backs.

Basically, all this stuff has been coming out because Demi revealed a lot in her memoir, and in her media appearances promoting the memoir. In an interview with Good Morning America’s Diane Sawyer about why she wrote the memoir, Demi opened up about all the gritty details of her childhood before she got into the drama in her adult life, first during a 10-year marriage with Bruce Willis and then in her marriage with Ashton. She and Ashton met at a dinner party in 2003 and were married by 2005. It was a big deal at the time because she was 15 years his senior, something she mentioned would never be a big deal if it were the other way around—her ex-husband Bruce Willis married a woman 23 years younger than him, and nobody so much as batted an eye. At the time of her marriage to Ashton she was also pregnant, miscarrying six months into the pregnancy. She then spent years trying to conceive through in-vitro fertilization, to no avail.

She eventually talked about how she and Ashton separated in 2011 after he cheated on her. She explained to Diane Sawyer how she was getting ready to walk the red carpet for a new movie and got a Google alert on her phone saying, “Ashton Kutcher caught cheating.” (Imagine finding out your husband cheated on you via a Google alert while you’re getting glammed for a f*cking red carpet…) She immediately called him: “I asked if it was true and he admitted it right away. I think my response was, are you f*cking kidding me?” She explained this is also around the time she broke her sobriety and started taking Vicodin, up to 12 pills a day, her ex-husband-turned-friend (-turned-I-guess-not-friend?) Bruce was no longer speaking to her, and neither were any of her three daughters. Eventually her disordered eating resurfaced, and in 2012 she ended up passing out and having a seizure at a party after smoking synthetic weed and inhaling nitrous oxide, or what I like to refer to as a typical high school Saturday night, which resulted in her journey back to sobriety and to mending the relationships with her daughters.

So basically, Demi Moore’s memoir is pretty explosive, and it’s dredged up sh*t with Ashton Kutcher in particular. It makes sense, since they were together for so long, but Ashton doesn’t come out looking great in the way Demi tells it. Demi explains in the book how she and Ashton started having threesomes because she thought it would help save their marriage and how she “went into contortions to try to fit the mold of the woman he wanted his wife to be.” She writes, “So when he expressed his fantasy of bringing a third person into our bed, I didn’t say no. I wanted to show him how great and fun I could be.” Which like…is understandable. Love makes you do crazy things that you may not otherwise, and I know I can connect with the feeling of going out my comfort zone to try and hang onto someone that I was never meant to hang on to. On the other hand, I’ve read enough r/relationships to know that men (and women too, probably) often will use a threesome as a way to get permission to cheat on their significant others. LOL, bleak, I know, but people are trash.

In an interview with Ellen DeGeneres on Tuesday, Demi said that her ex-husbands were all given copies of the memoir prior to the release, but mentioned in The Wall Street Journal that they hadn’t read it all yet. According to a recent New York Times profile, Demi “felt strongly that she had the right to share stories that involved her famous ex-husbands if these episodes were principally about her, and she was confident that her portrayals of them did not make them into villains or her into a victim.” She went on to say that she hoped nobody was upset with their portrayals in the book and mentioned how everyone remembers things differently, and this is her story. And according to Ashton’s Twitter he’s salty but sort of….fine?

With all the headlines on the “Demi and Ashton drama”, I assumed I was going to be digging through a ton of sh*t and that I’d find all these terrible bombshells of information, but it seems like Ashton is trying to stay away from any sort of messy situation, even if part of him wants to say his piece.

I was about to push the button on a really snarky tweet. Then I saw my son, daughter, and wife and I deleted it. ❤️

He followed it up with a tweet saying “‘Life is good.’-Larry Kutcher,” quoting his father, before bizarrely posting:

Naturally at first I thought “HOLY SH*T LET’S TEXT ASHTON!” Assuming he had an Aaron Carter style breakdown and was ready to spill all the piping hot tea to the first person who called him, but a quick browse through Twitter shows he first posted the number back in July as a way to communicate directly with him, and to no surprise, it sends back an auto-response to a link.

I know...what a goddamn tease. Regardless, it seems the Ashton and Demi drama, like most, is fleeting. Hopefully Demi’s book does well and she once again resurfaces as the most powerful and highest paid woman in Hollywood, because frankly, she’s been through the f*cking ringer and deserves it.