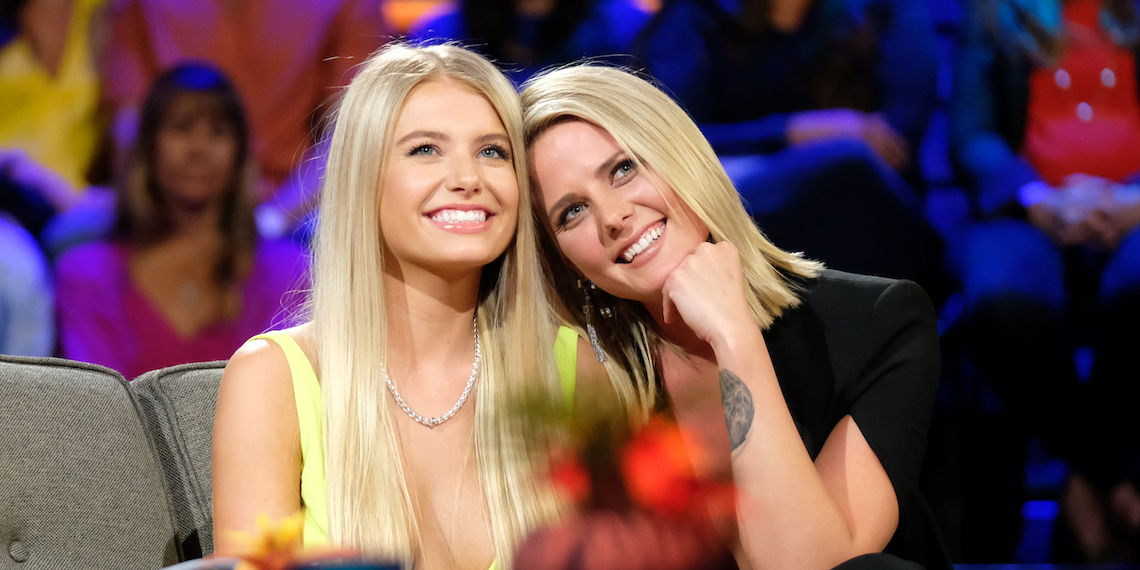 Which ‘Bachelor In Paradise’ Couples Are Still Together?

It’s been a long, drawn-out year for Bachelor Nation, and I for one am relieved it’s over. I normally live and die for Bachelor in Paradise, but this season was a total bore. The only true drama was the beginning of the season, and it was mostly Blake crying about how victimized he feels after women are mad at him for f*cking everyone else. Yeah, no sh*t Blake, people don’t like that. Then Caelynn went to live in a van. Clay whined about Angela—after he dumped her. And then it ended. Amirite? I don’t feel sorry for you idiots. Somehow, in spite of being some of the dumbest people alive, some of the cast actually managed to find ~*true love*~. Or they can at least fake it long enough to keep the ring and get sell some FabFitFun boxes. It’s like a fairy tale! So, here are the couples that are still together after BiP ended. I wish them all the diarrhea tea sponsorship deals their hearts desire!

you have no clue how much I love you @dylanbarbour ?

In spite of it coming out that Hannah had DMed pretty much every guy on the beach, Dylan remained stalker-y obsessed with her all season. TBH, I don’t know why you’d bother with someone that’s actually slept with everyone like Blake, when Dylan clearly likes you and only you. But thankfully, unlike some people, Hannah clearly has read He’s Just Not That Into You and went with the guy who actually liked her. Thank god. She and Dylan are totally compatible in the sense that they’re completely dull af and mostly like to lie next to each other while going, “No, I love YOU more!” So glad they can annoy each other with their complete lack of banter. Congrats on the engagement, guys!

I am so grateful for our story being shared. Learning to be comfortable with who we are is a major part of most of our journeys. Thankful for these vulnerable moments. So proud of you, Dem ❤️

I love Demi, and maybe I’m selfish, but I wanted to see more drama from her. I love that ABC is finally acknowledging that gay people exist, and maybe this is hard-hitting conflict for people that live in the Midwest, but over here in LA, people are just gay and it’s not a gimmick or a point of interest. It’s normal. I wanted to be entertained, you know? But whatevs, I guess I’ll take watching a super cute love story unfold. Look, I’m cynical, okay?! Anyway, Demi and Kristian are still engaged, and I’m happy for them.

As you’ve seen..It’s been the furthest from easy. From the decision to take the leap onto the beach, navigating what was real and staying true to myself, and my world that spun out afterward. None of it has been a walk in the park. BUT I’ve learned, a lot. I’ve learned to be more direct, how to challenge myself and others, I’ve learned that I’m empathetic to a fault, that love languages are so important to understanding others, that self sabotage can be found in many forms, and BOY have I learned what patience looks like. But most of all, I’ve learned that happiness isn’t something to look for in your partner. Your partner can make you laugh but your partner is not responsible for your happiness. Happiness is found within and sharing that with each other is what lights up a room! Communication is the link to everything, which is something we sure did LACK in paradise and shortly after. It took us a few months to really get our bearings (especially with some exceptional and unexpected challenges). I know none of you will truly understand why things are the way they are but I ask that you trust me and support me as I navigate this new world of mine. Because I’m happy with me and we are finally happy with us. We have grown so much in our friendship and now in our relationship since that day. Like I said to both of our parents and I will say to you- I can’t promise you this relationship will be perfect (it won’t be/ it isn’t) and I can’t promise we will last forever. Honestly, some relationships don’t last after 20 years and some do, that’s life. But what I can promise you is that I take this seriously, won’t lose myself, I will always try my best, I will always keep it real, and we will have each other’s backs. Thank you for following us through this journey of hope, faith, all of the next phases of life and more importantly – love ♥️ cheers to an effing INSANE adventure

I honestly forgot these people were even on the show about halfway through. Chris is the worst. He’s been on these shows 100 times and he’s never been here for the right reasons. This somehow made him irresistible to Katie. I love when we see normal, beautiful, intelligent women on these shows, and you’re like, “What? How are you single?” and then you see their taste in men, and it’s like, “Oooooooh, I see the problem.” See also: Tayshia. Katie is too good for Chris. Somehow, they’re still engaged despite the “rocky” relationship and her roasting him on-camera about their relationship issues. They also posted real awkward Instagram posts about how difficult love is. Um? You guys have been together for five minutes, most of which was on an all-expenses-paid beach vacation. I assure you, you’ll eventually have like, real problems.

If a grown-ass man throws multiple screaming tantrums on TV, what do you do? If you’re Tayshia, you think he’s husband material, apparently. In spite of all the red flags that JPJ is too immature for a relationship and a little unhinged, these crazy kids seem to have made it work because they’re back together, but they’re not yet engaged. I just can’t wait until they get into their first fight and JPJ thinks Tayshia is “insulting intelligence”. Yikes.

sorry we had to leave #bachelorinparadise early, the vantasy suite waits for no one ?

Dean and Caelynn are shockingly still together, after he dumped her on her birthday and then came back to sabotage a functional relationship to get her to come live with him in his van. Caelynn, you’re really bad at this. Staying with Connor should have been a no-brainer. Anyway. Dean and Caelynn have been traveling a bunch (how do they have money to travel? Neither of them seem to have jobs?). I also don’t buy that they really live in the van. I can promise you that Dean is squatting in Caelynn’s apartment rent-free and spends all day smoking weed on her couch. She’s probably like, “Dean, like, maybe you should shower today,” and he’s all, “What? Who wants an EASY relationship?” Dean, the answer is everyone. Let’s just hope they don’t have any Deanie Babies soon.

After Caelynn brutally dumped Connor to go live in a van (oh no baby, what is you doing?), Connor was devastated. Like, he literally found out that his relationship was over while watching Dean eat Caelynn’s face in front of everyone. YIKES. However, not all was lost for Connor, because after he threw a little tantrum and left, BiP sent Whitney to rescue him. They mostly stood around going, “Yeah, like, and uh, yeah”, and Connor said it was great conversation. Seems about right. So Connor and Whitney hung out for few days in Mexico and apparently are still dating and NOT living in a van. Sorry, Caelynn, Connor definitely won the breakup. And now he has a date to the middle school dance!

UPDATE: There are new rumors that Connor and Whitney are no longer together. Sad! But if you look at their Instagrams right now, they’re both obviously in Tulum. Idk, you do the math. I won’t be heartbroken if they don’t stay together forever, but it seems unlikely that they’re just separately in the same place in Mexico in the middle of September.