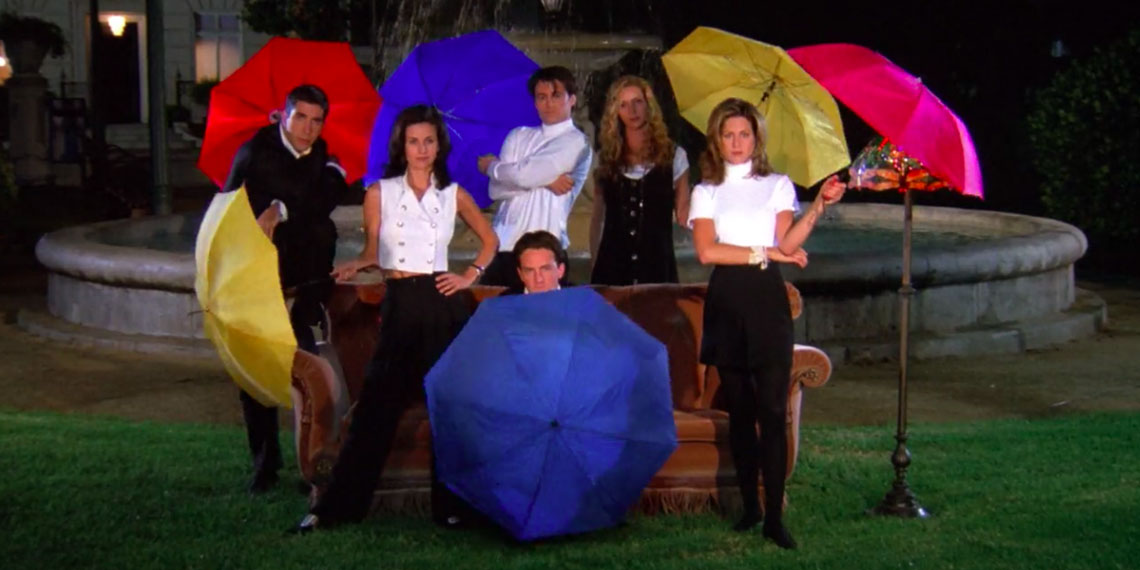 It’s the 25th anniversary of everyone’s favorite 90s sitcom featuring over-plucked eyebrows, ultra straight hair, and a Greenwich Village apartment we would all gladly sacrifice our most prized possessions to live in for just a few weeks. Friends has remained an iconic series since its premiere in 1994, and its 2004 final season that famously won the cast a shudder-inducing one million dollars per episode.  However, it’s 2019 now. Even the most loyal of Friends fans sometimes use the 10 seasons as nostalgic background noise to fall asleep to after we’ve watched too many true crime shows and need the soothing trance of rhythmic studio audience laughter. When we’re sick of rewatching The Office, Friends and all its mind-numbing Ross and Rachel “will they?/won’t they?” drama is always there.

Still, Friends is very much a product of its time. It’s nearly devoid of diversity, and the New York City it portrays is a fantasyland considering it was filmed in Los Angeles and it is repeatedly disrespectful to the harsh reality of NYC rent. We can forgive the starved eyebrows, but a world without being constantly attached to our phones? No dating apps? No Instagram? And why, for the love of Jennifer Aniston’s legendary haircut, are they always hanging out at that coffee shop?

Here’s the alternate NYC friendship fantasy timeline nobody asked for but we all need: Friends in 2019.

They all live together in a windowless Brooklyn basement.

In the original Friends, Rachel and Monica’s Greenwich Village apartment with a gorgeous skylight, balcony, living room the size of a school gymnasium, and a kitchen so adorable it looks like it was designed by hipster Keebler elves is the main hangout spot. Joey and Chandler live across the hall in an apartment they also couldn’t afford while Phoebe lives on 92nd St, and it’s never fully explained how she is constantly commuting downtown to sit on a couch with a bunch of fellow beautiful people who don’t understand her art. In 2019, though, they’re all together in Brooklyn, baby! Monica and Rachel’s rent-controlled dream is in Williamsburg, but it’s a windowless basement they share with Chandler, Joey, Ross, Phoebe, and a few mice. Luxury!

Chandler works at a startup and is constantly bragging about unlimited cold brew on tap.

Chandler has a standing desk, a ping pong table and a fridge full of Kombucha at his office, and he needs everyone to know. The app Chandler works for is vaguely dating-related, but it’s unclear what exactly he does there because he’s much more interested in talking about “the perks.” Despite his office’s open floor plan and craft beer fridge, he and Monica (a food blogger) never make enough money to move out of the basement.

Rachel and Ross have an open relationship, but they can’t agree on the terms.

Open relationships can get complicated for anyone, but for Ross and Rachel? What a mess. The entire “we were on a break” episode is a situation where Ross ends up getting emotionally attached to a woman from work that he and Rachel occasionally have threesomes with. Turns out, Rachel was also developing feelings for her and by the final season, their arguments about their influence on their baby daughter’s gender identity send them to a few productive sessions of couple’s therapy.

Every episode’s main conflict is their crippling student loan debt.

Regardless of what happens, every episode of 2019 Friends ends with the realization that none of them will ever own property or live a live similar to the ones their parents led. The only one who successfully pays off her student debt is Rachel, but the rest of the group resents her because her wealthy family fronted most of the tab.

Phoebe’s “Smelly Cat” goes viral on YouTube and it changes her forever.

Phoebe couldn’t resist uploading “Smelly Cat” to her YouTube channel, and it becomes an overnight viral sensation. Phoebe is immediately recognized everywhere she goes and she decides to monetize the song’s success with an America’s Got Talent audition that unfortunately flops. Still, her Etsy shop for healing crystals is a success.

Joey is a contestant on ‘Bachelor in Paradise’.

This one is obvious, of course. Joey is made for Bachelor Nation and instantly becomes a fan favorite, working his way from The Bachelorette to Bachelor in Paradise to eventually becoming the Bachelor. Does he find a lasting love on the shows? Nope. But he does have a series of popular reaction gifs and makes a decent living from nightclub appearances. In the 2019 Friends 10th season, Joey returns to Bachelor Nation as the bartender on Bachelor in Paradise, but he gets kicked off for flirting with too many contestants.

In season one of the real Friends, Rachel’s boss at Central Perk tells her she’s a terrible waitress. Yet she’s able to keep that job for years! How does she make any money when these people sit there for hours with a check of two coffees and one muffin? Rachel is fired from waitressing her third shift in 2019 Friends and turns to Instagram for money instead. With her family connections, a social media manager helps her build a brand that focuses mostly on “wellness,” “positivity,” and most importantly, being hot.

Joey’s role as Doctor Drake Ramoray is the closest any of them ever get to health insurance.

In 2019, Joey does appear on a soap opera, but the majority of his acting gigs are in Bachelor Nation. Still, none of the friends have real health insurance because Chandler’s startup purposefully hires people under 26 so they don’t have to provide health coverage. Rachel receives free teeth whitening and dental care kits from her sponsored content posts, but otherwise the gang just uses WebMD and hopes for the best.

That coffee shop is definitely a bar.

The most significant difference from the original is that the 2019 version of Friends replaces Central Perk coffee shop with a neighborhood dive bar. Considering 2019 coffee shops are filled with freelancers on laptops fighting over the table with the outlets, a coffee shop isn’t a great setting for a sitcom. Also, it’s forever unclear how that coffee shop stayed in business when they have a five person staff for a total of 10 customers and a very limited menu.

Eventually, NYC becomes too expensive for all of them.

The basement landlord finally discovers that Monica isn’t an “87-year-old woman who doesn’t know how to work a VCR” and the finale of 2019’s Friends features our fearless crew at the bar, defeated. “Maybe Philly?” Ross suggests, but Rachel replies, “Perhaps Austin.” It fades to black while an acoustic version of the beloved theme song plays.