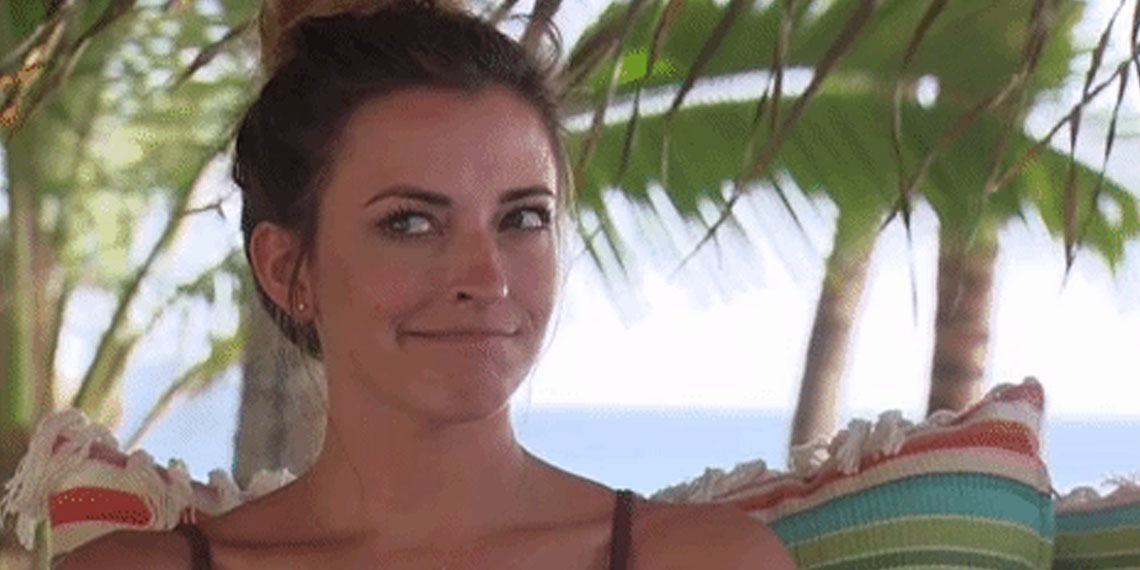 What We Can All Learn From Tia On ‘Paradise’

Guys. Tia is driving me insane. I actually really liked her on Arie’s sh*tstorm of a season, and I was looking forward to her being the Bachelorette over boring Becca. She was hot, assertive, confident, and interesting. Becca shopped at Windsor’s prom section and I can’t remember anything about her besides being from Minnesota. Like, that is her entire brand.

But then, Tia went to Becca about her feelings for Colton. This was strike one because all I could think was… honey. If Colton liked you, he wouldn’t have continued on The Bachelorette once he realized it was not you. You guys would have just dated IRL. But hey, maybe he was bound by a contract, so I let it slide.

But then we get to Paradise.

Tia has pretty consistently gone on a rampage every episode about how much she likes Colton. Again, Tia, let’s think about this logically. If he liked you, he could have contacted you after Becca cut him. He did not. What does that tell us, class?

Tia obsesses over Colton before he’s even there. Then she goes on one date with him and pretends they’re getting married. Like Tia, why did you even go on this show where you meet a bunch of guys? You literally could just date Colton at home. Oh wait, except he did not contact you. Someone get this girl a copy of He’s Just Not That Into You, please. Then she basically threatens Colton that if he does not love her, she will not give him a rose, and then he will be banished from Paradise forever. Yeah, T, forcing people to be your boyfriend really is the way to go.

Yes, yes you are.

This just makes me absolutely furious because it’s obviously the worst way to go. 1) It’s anti-feminist. Have some pride, woman. 2) The correct way to handle this is so easy. All she had to do was arrive at Paradise, beautiful and carefree, not say the C-word at all (Colton, not c*nt, obviously), and get to know some of the guys. Then when Colton arrived, she should have politely said hi, then continued to enjoy her life with a frozen marg by the pool.

She’d probably be surrounded by guys vying for her had she not acted like Colton’s own Yolanda Saldívar, which would be perfect. Then when he asked her on the date, she should have thought about it first. Then gone and had a great time. And then came back and stopped f*cking talking about it and continued to talk to other guys. It’s so simple. He is not your boyfriend. And should he have expressed any disinterest, she should have let it go.

TL;DR: Tia, just live your life like a normal person and go on one date and stop acting like you have tunnel vision. SO EASY.

Of course, she did the exact opposite of this. Colton runs screaming for the hills, so Tia immediately starts scrapbooking her dream wedding with Eddie the crazy roommate from Friends Chris’s face pasted on top of Colton’s. Chris knows he’s just the back burner bro, which doesn’t make anyone feel good, so he jumps ship ASAP for Krystal and her sexy baby voice.

Tia, who obviously cannot read the room at all, tells everyone that she and Chris are now in love. Tia. Honey. You don’t need to tell people sh*t like that if it’s true. They will just see it. You don’t need to force this kind of thing. Of course, Colton trying to be The Good Guy, aka, The I-Don’t-Know-If-I’ll-Need-To-Use-Her-For-A-Rose-Later Guy, tells Tia all about Chris’s indiscretions. Which he knows about because Chris has such little respect for Tia, he is announcing it to everyone. Tia. A man who wears tragic bandannas is running from you. For the love of God, get it together, woman.

Amazingly, Tia is not done here. She tells Chris she wants to date him anyway, and he was basically like, “yeah, hard pass,” and now he and Krystal are a thing. This is when Tia decides to be like “JUST KIDDING GUYS! It was Colton all along! I knew we’d be in love!” How do the producers film this with a straight face? I would have reached out and slapped her. But then. Guess what? It gets worse.

Tia throws such a tantrum at the prospect of Colton going out with human basset hound, Jacqueline, that he feels forced to tell Jacqueline and her sad eyes that he can’t. Let’s note here, Tia, that Jacqueline understood he was not interested and maturely handled it and walked away with dignity. She did not follow him around and tell producers they are getting married. Do you see? Then Colton comes to a realization: Tia is not going to let this go, so he either has to leave Paradise entirely, or he can stay, let her hang out with him for a couple weeks, and enjoy a free vacation. So when Tia does it it’s called determination and when I do it, it’s emotional blackmail? SMH, what a double standard.

Literally Colton: Like, I guess it’s fine if you follow me around, but mostly I want to stay in Paradise without you making it horrible.
Tia: OH MY GOD, WE’RE IN A RELATIONSHIP!

Thankfully, Raven comes in to slap some harsh sense into Tia’s face. Raven is totally on point with Colton’s fame-hungry interest, but also, this should no longer be an issue, because I can assure you that Tia has ruined any previous chance of ever being the Bachelorette. If wanted a Bachelorette that had zero awareness, we would have had the Queen of Naps and Cheese Pasta Corinne. It seems like Tia understood what Raven told her. I mean, I think so. She was crying so hard it was very reminiscent of another resident psycho who cried and needled a man until he gave in.

Anyway. Tia goes from “oh you’re right, he seems like he’s not interested, but maybe he’ll change, I’ll talk to him about it” to “WE’RE BOYFRIEND AND GIRLFRIEND!” before Raven has even finished her cocktail. Ugh. Tia is so overjoyed by Colton vaguely tolerating her it makes me sick. Find your self-respect, woman. If you hadn’t chained yourself to the Colton Express, you could easily have found someone who actually likes you.

Colton: Okay fine I’ll call you my girlfriend, we’re only here for a couple weeks, and hopefully it’ll make you stop talking.
Tia: WE’RE GETTING ENGAGED!

I wish Tia could read this before next week’s episode, but sadly, this was filmed long ago. Let’s hope she finds her balls and tells Colton to GTFO, and then has some frozen margs by the pool with her friends. But I guarantee she will continue her role as Colton’s Fan Club President and embarrass womankind for all of us. Since it’s too late for Tia, at least on national television, let’s all use this embarrassing situation as a learning experience. You don’t want to be this girl. The correct answer is always margaritas.