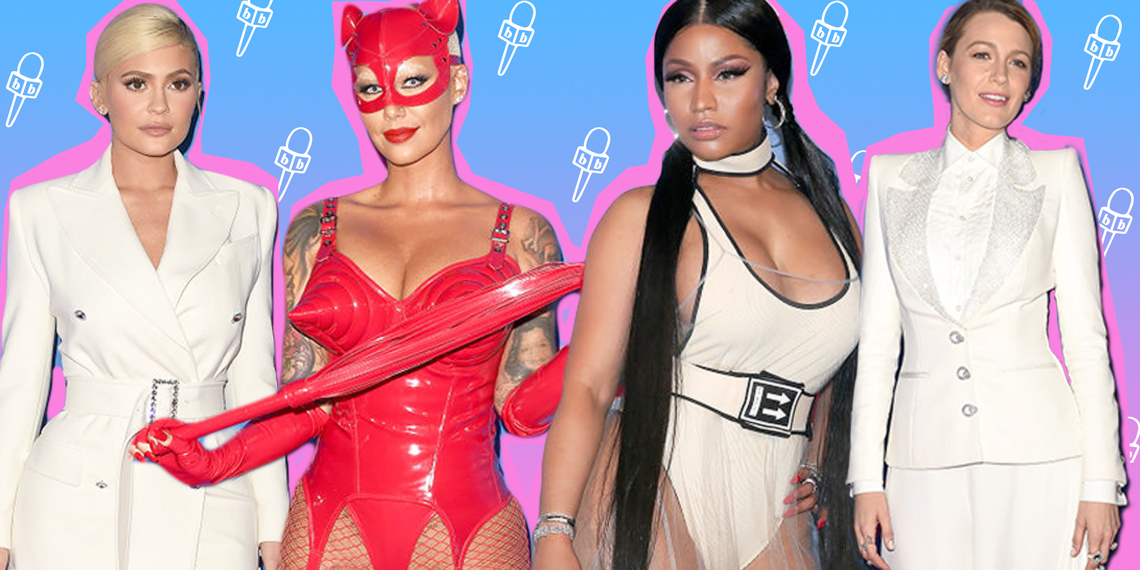 The Best And Worst Dressed Celebrities At The 2018 VMAs

Sooo last night’s 2018 VMAs were pretty anti-climatic. Like, they gave me an excuse to drink wine on a school night, so I’m not complaining cause that part was cool. And that wine definitely proved necessary to help aid my bleeding eyes from some of the fashion monstrosities that came across the VMAs 2018 red carpet. Of course, I enjoyed JLo’s unbelievable performance, Ariana’s sultry “God is a Woman,” and Nicki’s boss rendition of “Barbie Dreams.” Still, I can’t deny how I miss the days of Miley’s inappropriate twerking and Kanye not really letting Taylor finish. Anyway, there were so many people at the VMAs this year that I didn’t even f*cking know, so naturally I left them off this list, so don’t @ me. The trends of the night were metallics and sheer, which as always some celebs did correctly while others…eh, not so much. Sidenote: why the f*ck did Madonna look like one of those fortune tellers on the street harassing me to get a shitty $10 palm reading? I just don’t get the connection there between her wacky flea market look and her Aretha Franklin tribute. Well, the worst only gets worse from here, so let’s get it going. In no particular order, here are the best and worst dressed from last night’s kinda boring VMAs. And shouts out to Glam Squad for making the Betches look amazing on the red carpet so nobody thought we belonged on a worst dressed list.

Kylie is doing everything right. Well, almost. Like whyyy Travis Scott??? I’m sorry, but he’s just not cute. Actually, I take that back, she’s actually doing something right because she dumped Tyga’s loser ass and upgraded to at least a more successful, but still unattractive, rapper. So, between the two, I applaud her choice. Anyway, the VMAs aren’t known for being the classiest of the award shows, and I love that Kylie went opposite of what’s expected in a chic Tom Ford blazer dress. Like, clearly that Forbes cover is getting to her head, but who can blame her? This outfit is the epitome of, “Yes, I am a mom who just turned 21 and also happens to be on the cover of Forbes. And you’re not.” Touché, Kylie.

Speaking of the Kardashian-Jenners, cause like, when are we not, Cardi B was clearly channeling her inner Kris Jenner with the short black hair, giving us some major momager vibes. It’s almost like she gave birth to Kulture and then was like, “f*ck, what would a mom wear to the VMAs?” Then Googled “famous moms” and saw a picture of Kris and just brought that to her stylist. Regardless of how she came about this look, Cardi looked classy and glam, and I’m going to give her an enthusiastic proud dad-level thumbs up.

Sooo this one may go against popular opinion, but I was totally on board with Nicki’s VMAs look. It’s weird not seeing Nicki in some obnoxious shade of pink and, I gotta say, seeing her in this white number was a real treat. Sure, the Rapunzel ponytails were a little much, but this is Nicki Minaj we’re talking about, and the fact that she wasn’t wearing a tacky pink wig was a total win. Sure, we saw her whole ass, but that’s nothing new and, honestly, from an artist with a song like “Anaconda”, it was done in a relatively tasteful way.

I’m confused, is anyone else concerned that Millie Bobby Brown is out past her bedtime? Isn’t she like, 10? Or is it 11? Sh*t, now I’m confused. Shoutout to her for either successfully sneaking out or convincing her parents to let her go out on a school night. Not only did she succeed in getting herself to the VMAs, she also looked on point while there. Her look was sweet, simple, and I’d really like to get my hands on that stylish crop top. It’s kinda crazy how good someone looks when their head isn’t shaved and they’re not clutching a box of Ego waffles.

Madison Beer’s look was easily one of my favs. Her chic and classy white suit looked fire. Like, if she wasn’t already hot enough, this outfit burned it down. That was cheesy, I’m sorry. Her look was tasteful and mature, although I could have gone without her grandmother’s brooch smack dab in the middle. Like, if she had done this look with the blazer slightly open with nothing underneath, then there’s no way she wouldn’t have been my hands down best dressed of the night.

Like, real talk, what is Olivia Munn up to these days? I feel like she hasn’t been in a movie in a minute—or if she has, I haven’t seen it. I liked it when she and Aaron Rodgers were feuding with Jojo and Jordan Rodgers. That was fun. Well, idk wtf she’s doing now, but she did look amazing last night in the ideal VMAs dress. The purple color of the dress was amazing on her, and the dress was the perfect amount of VMAs-appropriate sparkle.

Ugh, JLo, you’re SO MUCH better than this slinky metallic dress. Yes, she looked amazing as JLo always does, but I’m putting Jenny from the Block on the worst dressed list because this look was way too predictable. And like, seriously, I’m so over the one leg thing. I don’t want to see your slim right leg, JLo, I want to see those drool-worthy abs. I need more sexy and less basic b*tch headed to senior prom. Either way, I can’t deny that killer performance. Not to mention, the dress she wore when she accepted the award for “Dinero” slayed. Not sure why she wasn’t wearing that dress on the carpet instead, but I guess that’s why I don’t get paid thousands of dollars to dress celebs. But like, clearly I should be.

Tiffany Haddish is hilarious, but she’s one of those celebs who clearly can’t dress herself for sh*t. And I don’t know who these stylists are that are getting paid to make these celebs look like straight clowns, but it’s really starting to annoy me that I don’t have that job. This dress was a big thumbs down and we could have definitely done without the headband and the giant hoops. It’s a lot.

I don’t know who this girl is, but yikes. She looks like the drag queen version of Lord Farquaad, or at best, disco Mary Poppins. Sorry, Grace. Best of luck to you and whatever it is you do.

Rita Ora, no. No, to the dog collar. No, to the sheer spaghetti dress—I’m actually pretty sure I own this bathing suit cover-up. And the eye squiggles are a little too literal—that’s fine for a sorority theme party, or like, Lil Xan, but not the red carpet.

I’m so f*cking over everyone raving over Blake Lively’s style. Like, don’t you get it, people? Serena van der Woodsen had amazing style, but Blake Lively does not. Instead, she just has a perfect husband and a perfect life—I can see how it’s easy to conflate them. She looks like a haunted Willy Wonka meets circus ring leader who also has to get to her catering shift at seven. Or, maybe more simply, she just looks like the ghost of Christmas past? Idk wtf she looks like, but it’s not good, and Serena van der Woodsen would definitely not approve.

There’s nothing, like, inherently terrible about this outfit, it’s just altogether pretty blah. Like, I’m pretty sure I saw this ensemble at my prom. In 2009.