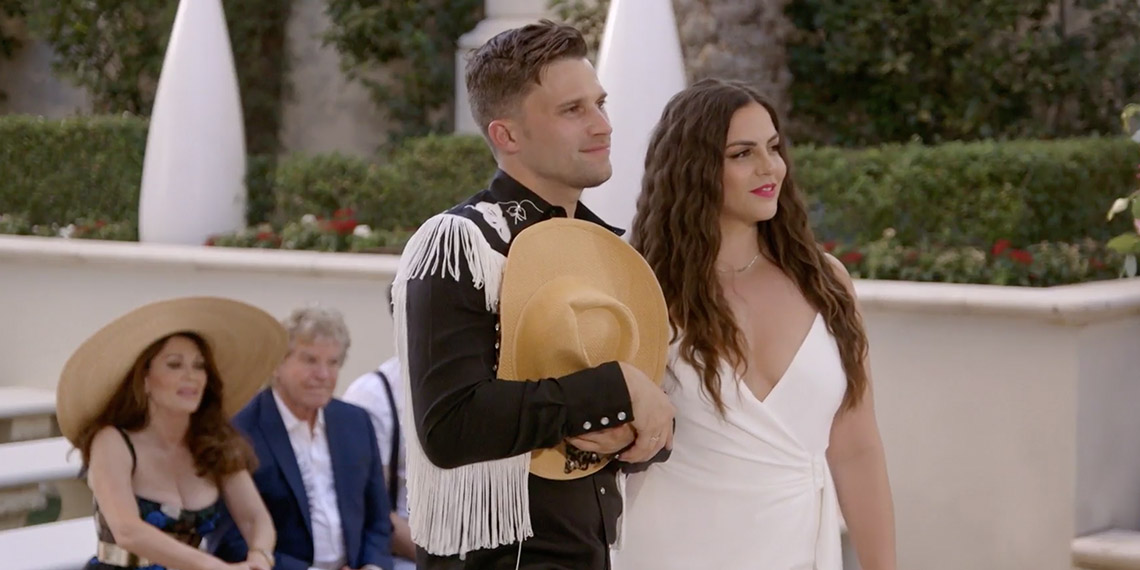 Greetings, children of the quarn, and come join me for the latest Vanderpump Rules recap. Truthfully, the only thing I remember about last week was how unintentionally hilarious Charli was. Judging by her Instagram follower count and her typical allotted amount of screen time per episode, she is pitifully underrated. Like, not to brag (but kind of to brag) but how do I, a certified jackass who just subtweets my Hinge dates and posts screenshots of those tweets to Instagram, have more followers than a regulation hottie on a hit TV show? I will try to not let this go to my head.

Narrator: She would, in fact, immediately let it go to her head.

It’s only been like, three episodes since Jax and Brittany’s wedding, and we’re already back on the wedding train with Katie and Tom’s fake Vegas wedding. Stassi and Sandoval are officiating the wedding together, because I guess Katie and Schwartz really do not want to be legally married. Just kidding, I’m sure Sandoval, at least, will get all the proper licensing. Stassi will probably just find a way to not really do her job and make it about her.

Seeing Danica, Scheana, and Charli go to an outdoor bar and order Aperol spritzes is giving me physical pangs of grief. I too remember those days!! Scheana’s not going to Katie and Tom’s wedding because she’s getting her eggs retrieved, and not because she wasn’t invited. Phew, I honestly wasn’t sure.

Meanwhile, at TomTom, Brett is telling Max that he made out with Dayna but it was only because he downed three fruity drinks right in a row and he never has carbs or alcohol! He definitely doesn’t like Dayna at all. This is shady.

Charli is once again the underrated MVP of this entire show with this quote: “To men in LA, vaginas don’t have a face.” New York is the same, in case anyone was wondering. Or is the problem just… men? More on this at 8.

Gonna be honest with you guys, I like, scrolled through Instagram for five solid minutes of Lisa pretending to buy shoes and everyone arriving in Vegas. I just watched McMillions yesterday and now I’m triggered by any and all B-roll footage.

Unfortunately for Dayna, she has been left at SUR to polish glasses—as if she would have been invited to Vegas in the first place. Scheana comes up to Dayna to tell her, once again, that she’s freezing her eggs. The thing is, I could easily make a joke about how it’s like… Nobody: Scheana: I’m freezing my eggs, but the saddest part is that still nobody ever listens to her.

Over in Vegas, Lala and Randall are talking in bed, and wow, they look really good here.

As Schwartz is unpacking, he pulls out a bra that is definitely not Katie’s, that just “happened” to end up in his suitcase. It is… pretty dark to watch Schwartz try to jokingly-not-jokingly gaslight Katie that it is, in fact, her bra, only to slink away when that doesn’t work, muttering, “I’m so f*cked.” Ohhh boy. This is not gonna be good.

Also in Vegas, not at all prompted by producers, Beau calls Stassi’s dad to ask his permission to marry her. Beau is sweating like a whore in church and stammering like… a whore confessing in church? I don’t know, I don’t go to church!

Things I did not need to know: Raquel is turned on by James’s sobriety. Yea, I’m not surprised that James is better at sex when he doesn’t have constant whiskey dick. Let’s move on.

Scheana’s doppelgänger waitress is crazy, but what’s even crazier is Stassi trying to flex like she doesn’t remember the name of Scheana’s song. She calls it “Sweet as Silver,” and like, bitch, we all know you know it’s “Good as Gold.” First of all, you heard it nonstop in the Pride parade. 44 donkey kicks to the ear, remember? Also, it is a bop, so put some goddamn respect on Scheana’s name.

It’s pretty wild that Schwartz is going to insist that he has nothing to hide vis-à-vis the bra situation, when we all saw him black out in Mexico and end up in a totally different resort. Just saying, it’s completely within the realm of possibility. But then we learn that Lisa put her underwear in there accidentally but also as a prank? I am confused, but honestly not upset with this turn of events.

Ariana’s reaction to the giant bottle of Casamigos is everything.

Bootleg Scheana continues to trip even Max and Lisa out, and predictably, she’s flirting with Max too. Is this a glitch in the Matrix, or do they just go to the same botox doctor? Where is Charli for a hilarious yet true quote about all the women in LA?

I’m also going to go out on a limb here and say that Max doesn’t get to dump Dayna/refuse to take her back and then try to forbid Brett from seeing her under the guise that he “has feelings” for her. Max is like, “if I can’t use Dayna for my storyline, no one can!”

Dayna and Danica are hanging out and she’s wearing some crazy sweatshirt with a chain situation. I love that they’re talking about the “magical website” where Danica shops that is definitely like, Fashion Nova.

I also love Danica trying to explain why Dayna and Brett aren’t a good match, in earnest, because Dayna is a Leo and Brett is a Pisces and “those two just don’t mix.” And then she makes an off-the-cuff remark about how two of her exes have restraining orders against her? Okay, one, who let her on this show? But also, like, who is only letting her have a minimal part in this show? This is a huge missed opportunity. We need more Danica content.

Katie and Schwartz’s fake wedding is pretty fun, and this is the best Katie has never looked. But um, super yikes that Stassi used her friend’s second wedding to sh*t on Beau for not proposing. I need to say it again because I’m not over it: yikes. Girl, get a grip.

Brett, Dayna, James, and Raquel are on the weirdest double date ever. Brett stumbles through a half-assed garden metaphor and then talks about how he….. has a fetish to drink his mom’s breast milk? Sorry, but that’s what I heard, guys.

Dayna remarks that Lisa “has a phat pussy”, and can we not with the Lala energy? I’m going to crawl into my own belly button like Stimpy in that one harrowing episode of Ren & Stimpy.

The next morning, Stassi calls room service in a fake British accent. I would knock it, but I’m about to be doing that with telemarketers in about a week just to get my kicks.

Unsurprisingly, Max f*cked Bootleg Scheana. You know what we call that? Brand loyalty.

The next day, the Bubbas are extremely hungover, and it’s the moment of truth to see if Tom was able to hang onto his marriage certificate…. Again. He did lose it, and I gotta say, this is on Katie this time for trusting him with it again.

Honestly guys, maybe this is a blessing in disguise. Look at it this way: if you never get legally married, then you don’t have to deal with (or pay for) a divorce!

If you want more Vanderpump Rules content, check out our video with Kristen Doute from the Betches Instathon: