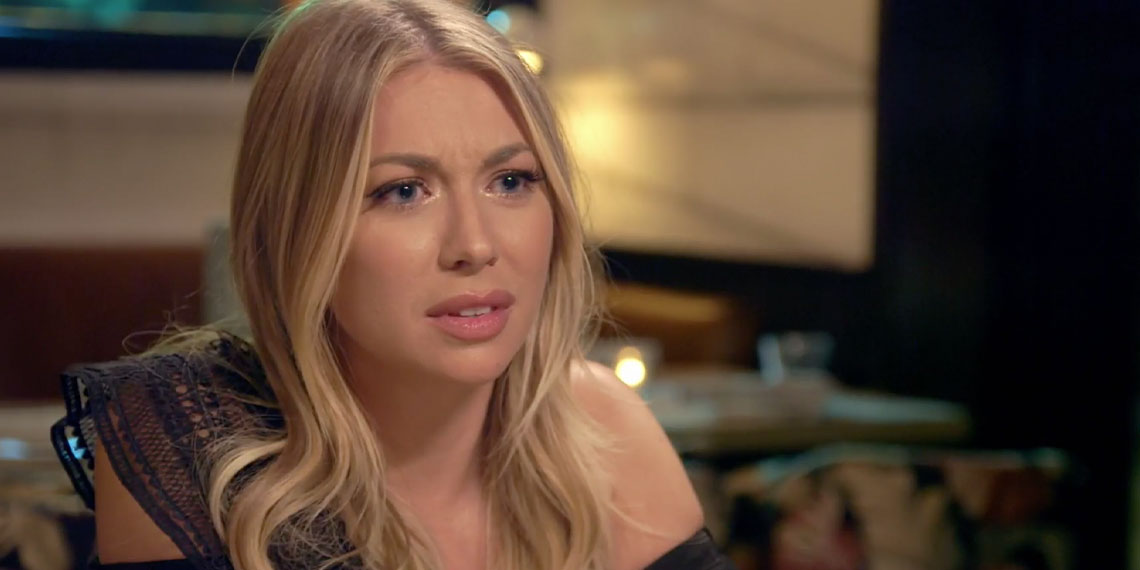 14 episodes into this season of Vanderpump Rules, and I still feel like nothing really of note has happened. Jax and Brittany’s wedding charade came and went. Kristen is spiraling further inside of herself. Lala is doubling down on her role as the cast bully. But are any of these actual events? This is nothing like Jax banging Kristen, or Kristen flying up Miami girl to accost Sandoval, or even Kristen wearing that desperate green dress to go “get her mail” post-breakup. I’m beginning to truly come to terms with the fact that Vanderpump Rules is so far removed from its heyday that it can never return. It is a shell of what it once was. Or am I being too idealistic? After all, even with all that said, I do think this has been comparatively a good season.

When last week ended, Randall pranked Sandoval by way of Jax by getting him fake-arrested; the only person who vocally did not find it funny was Katie. This ends with Schwartz saying some truly gross things about his wife, and him being genuinely shocked that Katie does not still leave the party with him. Then again, these two just might be two toxic peas in a radioactive pod: Schwartz yells “that’s why I don’t f*ck her”; Katie screams about how his d*ck doesn’t work. A day in the life of the Bubbas.

This episode opens with Schwartz, Beau, Jax, and Max at a skate park—fitting considering all these guys have the emotional maturity of 14-year-olds. Jax asked Schwartz if he’s “squashed things” between him and Katie, and although I don’t think Jax is any kind of master—or even adequtae—wordsmith, given that he does not even know how to pronounce the word “inevitably”, I do find the fact that he refers to a serious issue in Schwartz and Katie’s marriage as something that needs to be “squashed” troubling.

I spent all this time using my creative writing degree, and came back into the other half of this cast at axe throwing, where Raquel is very good (respect) and Dayna is telling Brett about his big d*ck energy. Is this flirting now? You just… tell the guy he has a big d*ck? No wonder male mediocrity is at an all-time high.

At SUR, Charli tells a table of patrons that she is a picky person about her cheesecake so she goes to the Cheesecake Factory. We truly do not deserve her.

Guillermo comes up to Lisa to air some grievances about Danica. She apparently screwed up her food order at one of her two tables, which somehow resulted in one table getting overcharged $200? I’m not really clear on how that happened. I don’t really think it’s important, what is important is that Lisa clearly regrets hiring an Instagram model to manage one of her restaurants.

The next day, Schwartz and Katie are like, debriefing on their fight or whatever and Katie says she feels the prank was a little insensitive given the times we’re in. Uhh… do we… stan a woke queen? No, you’re right, the bar is so f*cking low for this show that I’ve deluded myself. But, we are cool with an aware person. I’ll say that.

Schwartz’s immediate response, though, is to snap, “don’t be a social justice warrior,” which is equal parts disappointing and unsurprising. Sheesh, read a f*cking newspaper. Ok, no you’re right, that’s asking too much. Read a f*cking tweet or two.

Hold on hold on hold on. Schwartz feels that Katie’s reaction to a prank on a 40-year-old was dumb and immature? But the prank itself was, what? The height of comedy and maturity? Am I living in the Upside Down?

This fight is completely glossed over with one half-assed apology and a little bit of baby talk from Schwartz, which is all it takes for him to get away with anything. I could see this scenario 100% happening:

Judge: On the charge of first-degree murder, how do you plead?
Schwartz: Your honor, I just like, don’t know, did I mess up? Yeah I guess, but, I’m trying my hardest… *puppy dog eyes*
Judge: You’re absolutely right, case dismissed and I award the defendant $1 million for his pain and suffering.

The next day, Katie, Stassi, and Kristen meet to talk about planning a Witches of Weho party. Stassi admitting that she’d rather be a dictator than part of a democracy is probably the most on-brand thing she has ever said. Anyone remember the “Nazi chic” scandal? It’s important to know yourself, I guess.

Lisa and Stassi’s mom join them for some reason, and Lisa spills the beans about seeing everyone in Vegas. The tea? Katie and Tom are getting married for real there, and Kristen. Isn’t. Invited. Wow, this sh*t is for real, then.

Dayna and Brett are… meeting for drinks? *Checks screen again* they’re on a date? Huh? All it took was one BDE comment and they’re on a date already? This is hella strange. What’s also strange is that on this “date”, they’re like, pretending to psychoanalyze each other.

Brett: I feel like you have a good head on your shoulders.
Dayna: I’m getting a sense that you may have a complicated relationship with a father figure, whose name starts with J?

Like, did they just add each other on Co-Star? Why are they doing this?

Dayna opens up about losing her mom. And I don’t even open up about any of my traumas until I get to the altar. Not sure if I should be scared or impressed with her. But how long do we think she had that “I have more baggage than Tumi” comment in her back pocket? And furthermore, is it okay if I steal it?

So while Stassi is bitching to Lisa about how Beau hasn’t proposed yet, Beau is commandeering Katie and Schwartz to help out with the proposal, because he says they’re the only people he knows who can keep a secret. Has he met Schwartz? Schwartz can’t even keep a bartending shift.

Naturally, Kristen calls Scheana to ask what the deal is with Vegas, and naturally, Scheana spills all the beans. Gotta say, I’m kind of into this subplot of Scheana being Kristen’s informant all season. It’s so random, but such a necessary little deus ex machina.

Brittany walks into SUR and greets Peter, and you can tell she’s just waiting for Peter to say something about how she’s a married woman now. Thankfully Peter doesn’t take the bait. I love it.

The fact that we are supposed to believe that Brittany is taking a waitressing job at Sur to support herself is actually offensive. Offensive that they think we, who have been riding or dying for the past 7.5 seasons, will believe this.

Ariana, Lala and Dayna are hanging out, and I’m not getting into this p*ssy tasting conversation, y’all, so don’t even ask. It’s kind of funny listening to Dayna give some fake justification why she’s ~suddenly~ into Brett (hint: a story line). Also funny that Dayna made a big show out of inviting Max to her birthday party, when in fact she did no such thing, but claims her party is an “open invite.” An “open invite” does not an invitation make. If it does, I’m pulling up next year.

Stassi and Beau are at dinner, once again fighting about whether or not they’re getting engaged. Instead of being like, “it’s coming, I have the ring, just chill out,” he’s like “nahhhh I’mma make it seem like I don’t really wanna get engaged and f*ck with her emotions and I’m stringing her along so she’ll be extra surprised when I finally pop the question.” That is an incredibly sh*tty take. And they are supposed to be the most stable VPR couple. Yikes. I’m beginning to see why the people in my Facebook groups aren’t as impressed with Beau as the general public seems to be.

Kristen takes Katie outside, and she’s already crying. Yikes haha, this isn’t going to end well. If there’s one thing Katie has disdain for, it’s open displays of emotion. And Kristen.

Katie and Kristen could not be on two more different pages. They’re not even in the same book, or on the same bookshelf. Katie is like, “Kristen, we haven’t been friends in a long time.” Meanwhile, Kristen is still insisting that she loves Katie and would jump in front of traffic for her. I too, would probably jump in front of traffic with respect to Katie, but with a different motive than Kristen for doing it.

Dayna hears that Scheana is actually upset about that she’s dating Max. No wait, Brett. I can’t keep up. Scheana is like, mad that Dayna didn’t clear the date with her? I thought she did that earlier at SUR? I’m very confused. I wish for once Scheana could call a spade a spade and just admit that she’s either A) just upset because she’s hormonal (this is me being generous) or B) upset because she wants to date Brett.

The more Scheana insists she doesn’t like Brett, the more I just want to scream “the lady doth protest too much”. She really doth, though!

Holy sh*t, thank God Lala finally called out Scheana for taking in all these stray f*ckboys as her “best friend” du jour when she really has an interest in them. Is sober Lala… me?

Damn, I do feel bad for Scheana. Spoken as the designated single friend who’s always witnessing everyone around her find happiness with “their person”, it like, gets kind of annoying being by yourself for yet another significant life event.

Anyway, the episode ends with some sappy speech from Dayna, and then she and Brett, covered in cake, making out. Plus a final gem from Charli, who tries to run away from the cake but ends up with it on her face and in her hair: my skincare routine is too expensive for this sh*t.