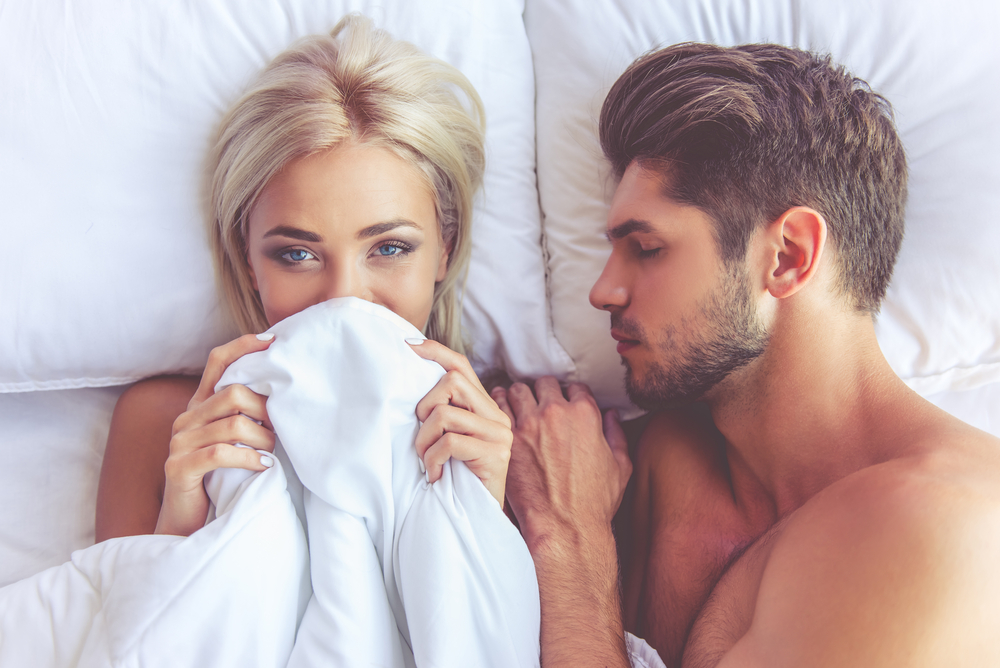 The Top 5 Things You Should Never Say In Bed

Everyone has a slightly different opinion about how much dirty talk is acceptable. Some people have a strong preference for non-verbal cues; others want spoken word poetry performed about their bodies until completion. (Don’t believe me? Attend Wesleyan for four years and get back to me.) So, while the best recourse is always to check with your partner about what they prefer, dirty talk is not a science. There’s no one-size-fits-all on what people are turned on by hearing. There is, however, a fairly definitive list of what people are turned OFF by hearing. Here’s a list of the top 5 things you should never say in bed.

“Are you close” is the sexual equivalent of “are we there yet,” and both are equally annoying. Obviously, when you gave up on an orgasm came 20 minutes ago and they’re still going at it, this thought will be on loop in your mind along with “oh god I think I’m starting to chafe” and “I think I can feel myself getting a UTI.” But when you basically announce “I wish this were over, can we wrap it up?” you’re setting both partners up for a shitty experience. You’ll either feel like a martyr for allowing them to continue or resent them for not offering to stop. They’ll feel embarrassed and hurt for not realizing you were no longer into it. (And they’ll also probably be way less close than they were a second ago, because they’re now self-conscious AF.)

In all fairness, this question can be asked with good intention. If you think of sex as a workout, hearing “I’m close” can be the equivalent of the burst of energy you get when you hear “final set” from your trainer. But odds are, they can’t predict the exact moment of their orgasm any better than you can yours. So save yourselves both the embarrassment, and just be upfront when you have to stop. A simple “this feels amazing, but I’m getting really sore. Can we pick this up later?” is much more effective. You may have to deal with a few minutes of blue ball-induced grumpiness, but anyone worth your time will understand.

If you’ve scored a second date at any point in your life, you know not to talk about exes. But there is truly no worse time to do so than in bed. Even if you consider it a compliment, saying “you give much better head than my ex did” will only ensure that both you and your partner are now thinking about your ex giving you head. And your partner will start wondering how long you’ve been thinking about your ex giving you head, and why you’re thinking about him at all, and you’ll be thinking about all the fights and weird avoidance strategies you employed with your ex because he was bad at giving head. Congratulations, now no one is enjoying themselves. Save this kind of talk for brunch with your friends.

Remember the episode of Friends where Rachel keeps bursting out laughing whenever Ross tries to make out with her? Granted, Ross is a man-child for the ages, but his reaction isn’t all that unfair. Sure, weird shit happens during sex and it’s actually a healthy sign if you and your partner can laugh together. But the key point there is that a) it’s together and b) it doesn’t kill the mood. If you bust out laughing while your partner is making a genuine effort to be intimate—like doing a sexy striptease—it’s super hurtful and unlikely to be something you recover from. (If they fully fall over because their clothes got stuck over their eyes, I give you permission to giggle quietly. Then go make sure they’re okay.)

As a general rule, if only one person is laughing, the other probably feels pretty shitty. And unless you’re actively trying to discourage someone acting sexual with you, don’t make them feel like it’s hysterically funny that they thought you were actually turned on.

Don’t pretend you don’t know what “whatever” means—you probably use it 16 times a day. It means “I don’t care,” “I wasn’t listening,” or “I’m too tired to explain it to you.” While wildly useful in other circumstances, it’s the worst possible response to any question asked in bed. If your partner is asking “what do you want” or “does that feel good,” that’s GOOD. (Actually, the former is a mixed bag. But “I’m not sure” is way better than “whatever.”) “Whatever” is the verbal equivalent of starfishing. It indicates that you’re not into it, that you’re only there to wait it out until they finish, and that there’s nothing they could possibly do to change that. Assuming you’re not fucking someone who’s cool with those terms, you just ruined the moment, HARD. But TBH, if you’re saying “whatever” during sex, you’re probably looking for an out.

Yeah, I’m sure there are some cases in the Trump family where this is a major turn on. But please god, let your partner bring it up before dumping them giving it a shot. The thing about calling someone “daddy” is that if they don’t like it, they REALLY don’t like it. Like, dry-heaving, reduced blood flow to the genitals, and serious questioning of how deeply rooted your daddy issues are don’t like it. Maybe they called their own father “daddy” as a child and are now thinking about that. Maybe they one day hoped to have children of their own who refer to them as “daddy,” and they don’t want it sullied in advance. These are all legitimate reactions.

IMO, there are just too many gross interpretations for this to be a risk worth taking. I can’t speak to the people who do like this, because I don’t know any, but it’s possible that this is a high-risk, high-reward move. For now, though, I can only say with confidence that it’s extremely high risk, and if this isn’t a NEVER, it’s at least an extreme “proceed with caution.”

As I said before, the easiest route to successful dirty talk is always finding out what your partner wants. But since actual conversation delivering the sex equivalent of an HR survey can be daunting, the above list should ensure that you at least don’t embarrass yourself or hurt anyone’s feelings—no awkward discussion required. You’re welcome!