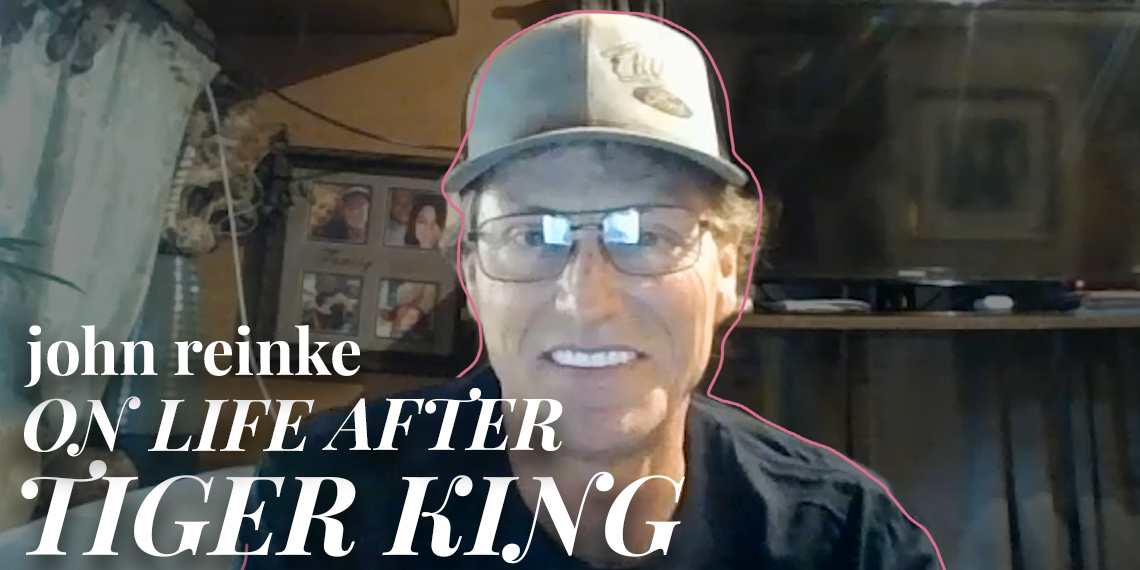 Even months into quarantine, there’s no way you could forget about the sensation that is Tiger King and all of its fascinating characters like John Reinke, the former manager of Joe Exotic’s G.W. Zoo. Reinke has found a new girlfriend after his departure from the G.W. Zoo, as he reported on “The Tiger King and I” reunion hosted by Joel McHale. Unfortunately for him, Texas courts are out of session due to the pandemic, so his divorce still hasn’t been finalized. And we thought Kristin Cavallari and Jay Cutler had the messiest pandemic split. Sara Levine, Betches EIC and host of Not Another True Crime Podcast, sat down with John for a video interview.

Though Tiger King has literally become synonymous with quarantine, Reinke never thought much about the documentary while it was being filmed. “There were so many film crews in and off the park, it was just kind of like everyday stuff, you know, I didn’t think anything of it. We had several producers come on and say ‘hey, we’re going to make a documentary out of this.’ Yeah, whatever.”

Like the rest of America, Reinke watched the show right when it came out. “I wanted to make sure I wasn’t portrayed wrong, I just know how some of the media takes it out of context and makes you look worse than what you are.” Despite some of his castmates’ complaints, Reinke thinks “everybody was portrayed right.”

In Reinke’s view, the story of Joe Exotic’s crimes got twisted around. “He didn’t deserve 22 years. Did he do some stuff wrong? Yeah. Was he provoked into paying somebody? He didn’t pay him to go kill Carole, he paid him to get off his park so he’d leave us alone.” Even from behind bars, Joe is campaigning to have his name cleared. “I’m really, really shocked about how much he’s actually accomplishing from jail,” comments Reinke. And Joe’s efforts are pretty aggressive. He’s even commissioned a huge bus to travel to D.C. to beg President Trump to #HelpFreeJoe, a presidential pardon (omg, can you imagine Donald and Joe together? That would be some major quarantine hair inspo.)

Though they’re not exactly BFFs, Reinke says that they had a strong working relationship. “I was close to Joe. He knew I could run the zoo and I could run the staff, and he took care of everything else.” Unfortunately, he’s now in prison for allegedly trying to “take care” of a certain flower crown-wearing enemy.

Obviously, the biggest controversy the show created was whether Carole Baskin, Joe’s archnemesis, really did kill her husband. Though Reinke’s never met her personally, he has met her second husband Howard when he visited the zoo during the copyright lawsuit between Carole and Joe. According to Reinke, “he was really nice to me” (and I guess you’ve gotta be pretty nice if you’ll let your wife parade you around on a leash on your wedding day dressed in a tiger print toga), but Reinke still says that “It’s been crammed down my throat all these years, not just from Joe, it’s been crammed down my throat from all the animal people in the world that Carole killed her husband. So it was just in your mind that Carole did it.”

And it looks like Tiger King won’t be Reinke’s only claim to fame. He appears in a new comedy from Full Moon Features, Barbie and Kendra Save the Tiger King, out via Full Moon Features. Essentially, the movie follows two total ditzes on their journey to save a young Joe Exotic from a plane crash. Yes, you heard me right. “It’s just something to break up the monotony from this Covid thing that’s got everybody tense,” Reinke says. And he’s right—I watched the trailer, and tbh it’s basically a crossover episode between Apocalypse Now and The Simple Life.

If you still can’t get enough of watching people who are inexplicably obsessed with big cats, you’re in luck. To hear more about Joe Exotic, real life catfights, a Tiger King movie (possibly featuring Matthew McConaughey as Reinke, which honestly isn’t the worst idea ever), watch the full interview below.