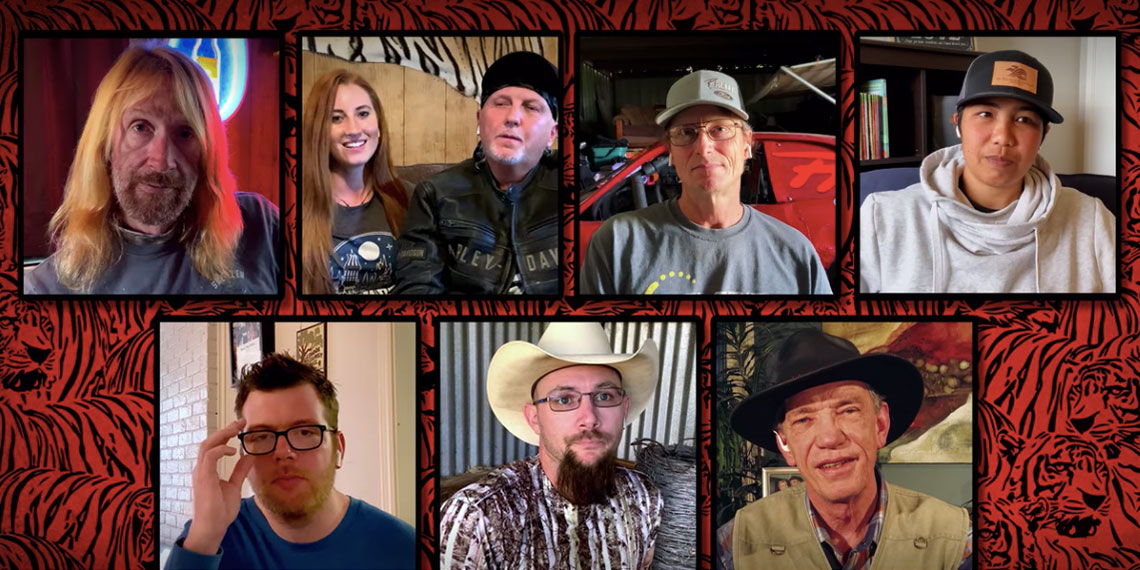 This Easter, Netflix has brought us a new episode of Tiger King. This is what everyone must mean when they say He is Risen. My mom told me to find a church service to watch online on Sunday morning, and so I sent her a picture of Joel McHale on my TV screen and she didn’t question it. I’m tempted to turn it off after the joke he makes about the global pandemic (tiger fever), but nevertheless, I persisted. Besides that terrible joke, there’s a lot to be sad about right off the top. Mainly, that Joe Exotic, Carole Baskin, and Doc “Bhagavan” Antle are not featured in it. Joe obviously can’t come to the phone right now. Why? Because he’s in prison, and I’m sure Carole and Doc don’t want to get dragged publicly anymore, which I relate to because it’s exactly why I refrain from going to family dinners. The interviews are also all done over what appears to be a Skype call, which is giving me PTSD to when I was still employed. As someone who knows people from Oklahoma, I’m impressed by the fact that this group of winners had the technological knowledge to each set up their video chats. I’m also impressed that they don’t appear to be distracted by their own reflections, which is more than I can say every time I try to have a Zoom call with my friends. For this reunion episode, our host Joel interviews each of them one at a time, and we start with Erik.

Joel asks Erik if he washed his hair today, which seems like a stupid question. We’re in the middle of a pandemic! I’m pretty sure no one has washed their hair in a month. Most people’s reasoning is that they haven’t left their bed, but Erik’s is because he gets peed on every day. Comforting to know his job is considered essential, but mine wasn’t.

OKAY. He hasn’t even WATCHED the documentary?! When I post an Instagram story, you have to count me out of any activities for the rest of the day because all I’m doing is rewatching it. This guy is so wholesome. He talks about how the cats are like his children and he doesn’t even know how to pronounce “memes.” He reminds me of my 82-year-old great aunt. Erik lets us know that getting bit by a tiger is nothing to be afraid of! It just hurts until it stops, and then you’re good! Sounds like he’s giving a sex education lesson rather than talking about a 600-pound cat clamping its jaw down on you. He wants everyone watching to know that he’s never done meth, but he used to have a drinking problem, once again reminding me of my great aunt.

I would argue that Jeff Lowe owning 60-70 Affliction T-shirts is one of the more terrifying parts of this show. Obviously, Jeff is mad about his portrayal on the show, which appears to be a common sentiment from all of the terrible people featured in it. He’s saying that the producers had to have a villain and he was the one that got portrayed as such, but like, did he not watch it? We had a sex cult leader, alleged murderer, and someone who livestreamed himself blowing up a mannequin labeled Carole. Usually a TV show has to have a hero, but that’s what was missing here. There were plenty of villains to go around, so he’s not special in this regard! I’m glad to know that their nanny is settling well into their weird-ass open marriage. I was worried about her! I’m also happy to know that Allen is the “sweetest hitman you could ever hire.” I’ll be sure to keep that in mind next time a manager kicks me out of the bar for trying to organize a crowd surf.

Jeff is an expert at deflecting any blame from himself by just reminding everyone watching just how crazy Joe was. It’s an expert strategy. He tells the host that Joe was his own worst enemy by posting all of the videos he did threatening Carole, and I relate to Joe because when I have access to my cell phone after a few drinks, I too, am my own worst enemy. Jeff Lowe is definitely still a snake who is absolutely hiding something, but he’s not incriminating himself further today. Sigh.

John talks about how he was loyal to the animals over Joe because they “don’t give you any crap.” I’m getting mixed signals because Erik just said he gets peed on every day. Oh well. It’s nice to know that the reason that coronavirus is continuing to spread is because people are insisting on taking a photo with these guys in every Walmart in Oklahoma in the middle of a pandemic. Stay one tiger’s length away from him please, so I can go out for karaoke before the summer’s over!

He thinks Matthew McConaughey should play him and honestly after the side-by-side, I can kind of see it. Wait, is John hot? He tells the host he doesn’t consider himself a celebrity, just a guy in a documentary. I’m impressed with his humility, because I was an extra in Spy Kids in 2001 for less than two seconds and it’s still on my resume.

Saff is truly the nicest and most genuine guy on this show. He even talks about all of the good things Joe did, which is more than I would ever do for an ex-employer. Joel asks Saff if it was awkward with the tiger after the attack like it was a one-night stand and not a beast ripping his f*cking arm off. Saff tells us that he’s watched the footage from the tiger attack over and over again, which is honestly so brave considering I won’t even look at my messages after a night out. Overall, I stan Saff. How someone this level-headed got mixed up with all of these psychos is beyond me.

What a treat! Former Walmart gun salesman turned Joe Exotic’s gubernatorial campaign manager. Josh reminds us that he knew Joe was batsh*t crazy before taking the job, but it was his dream job so how could he say no? Um, have you ever considered how difficult it might be to get a legitimate political job after running a campaign that handed out condoms with the candidate’s face on them? Josh tells us that he loved his workspace because where else can you watch someone get their finger bit off by a bear right outside of your window? Ah, the beauty of nature! He tells us that he wasn’t Joe’s type because he wasn’t young and dumb. For the record, those two characteristics are not mutually exclusive, because every man under the age of 23 is an idiot. Josh also wants the viewers at home to know that he does not do drugs and never has, and as someone who went to public high school, they probably weren’t offering you drugs anyway. Sorry, Josh!

Oh my god it’s John Finlay?! Okay his teeth look so good! Maybe I’ll get new teeth. John tells us that everyone was hooking up with everyone at the zoo, which gives it more of a summer camp vibe than a professional place of business. Probably why so many laws were broken. I hate to be that person, but listening to him talk, I’m starting to see Josh’s point about Joe liking them dumb. He says he and his wife binge watched the show in seven hours. Okay John! You and everyone else with a Netflix subscription! He also says that he doesn’t like how he was portrayed as a drugged-up hillbilly. I thought that was just his brand, but apparently, he was five years sober at the time of filming. Yet he still thought being shirtless for every interview to show off his tattoos was a good idea.

So, our boy Rick’s in Norway because fleeing the country is exactly how you appear innocent after a true crime docuseries airs. I love how he describes his initial interaction with Joe when he decided he wanted to make a reality show based on his life:

Joe: What the f*ck do you want Rick?
Rick: I want to f*cking come work for you!

Let’s hope all job interviews are that easy when the economy recovers. Rick proceeds to tell us another story about Joe involving a horse that makes us hate him even more. I’m not so sure Joe should want to be released from prison. After Jeff’s glowing recommendation, PETA will probably hire Allen to murder him the instant he steps out of the gates. Rick still has nightmares from living at the zoo and I still have nightmares from watching this show, so I think we should all form a Tiger King victim support group. I’ll send the link for the Zoom meeting.

After watching this reunion episode, we have learned that everyone on the cast thinks Joe should be locked up. Shocker! Also, that less of them have done meth than we originally thought. Basically, nothing that we care about, considering Joe is incarcerated and Doc and Carole declined to participate. But, if you live in Oklahoma, hit up your local Walmart for a chance to spot a celebrity!

Jacob is a graduate student currently residing in Texas, but don't judge him for that. His hobbies include covering Jesse McCartney at karaoke and scrolling through his own tweets. You can find him on Twitter at @jacobhowle.