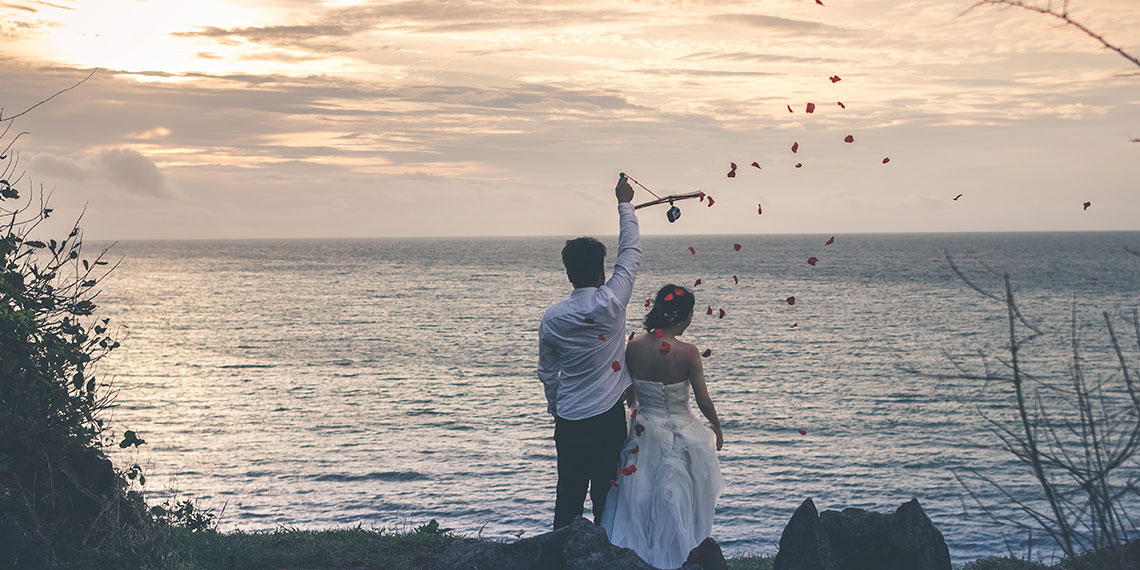 Okay, so obviously we love weddings. There’s nothing better than getting all of the people you care about together to celebrate your love, especially when you have great food, gorgeous flowers, and plenty of booze to go around. But…what if you could get married without all the planning, stress, and having to wrangle your in-laws? Eloping is as common as ever, and with wedding costs at an all-time high, plenty of couple are choosing amazing destinations for their non-weddings. Catherine Luther Wedding Films did a deep dive into the world of elopements on Instagram, and what they found makes skipping the big wedding sound more appealing than ever.

Unsurprisingly, the main reason that most couples cite for eloping is cost. The average wedding in the US costs over $30,000, which just isn’t realistic for many people. For the venue alone, the average cost is a cool $15k. You could go on one hell of a vacation for just a fraction of that. Rather than going into debt or cutting tons of corners on a wedding, eloping is a way to have an unforgettable experience with a much more moderate price tag.

But the most interesting part of Catherine Luther’s research revolves around the destinations that couples choose for their elopements. Coming in at number one is Bali, Indonesia, which makes sense because who wouldn’t want to go there? We just published a Honeymoon Guide to Bali, but that could double as an elopement guide with minimal adjustments. (Seriously, reading that guide, I want to find someone to elope with just so I have an excuse to plan a trip there.) I guess when you think about it, an elopement trip kind of doubles as a honeymoon, so Bali really is the perfect spot.

Back in Bali 📍 Ubud

The list of top destinations is a mix of domestic hot spots and international getaways, perfect for whatever kind of money you’re trying to spend on your elopement. After saving a ton of money by not having a wedding, lots of couples are able to ball out on an amazing elopement trip. The top international elopement spots after Bali are Paris, Reykjavik, Istanbul, Melbourne, and Tuscany. Lots of variety, but I wouldn’t be mad about a trip to any of these places.

The biggest cities in the U.S. also rank highly on the list, with New York coming in at number two, followed by Las Vegas, San Francisco, Seattle, and San Diego. Feeling extra frugal? Just do a weekend trip to someplace a short flight away, or you can even plan a special staycation where you already live, and invite as few people as you want. The great thing about elopement is that there are really no rules or traditions you need to follow, so it’s 100% customizable for what you want.

Just because you’re not having an extravagant wedding doesn’t mean you don’t want some epic photos, and there’s an elopement route that’s perfect for that: national parks. Yosemite National Park in California is one of the top five elopement destinations, and other national parks like Joshua Tree, Zion, Glacier, and Grand Canyon are also among the most popular spots. If you and your partner enjoy once-in-a-lifetime outdoor experiences, a national park elopement is kind of a no-brainer. Again, if anyone can find me someone to elope with so I can take one of these trips, that’d be greatly appreciated.

You are a pain in the butt sometimes, but I couldn't be more in love with you.

Of course, some people have their hearts set on a traditional wedding, and there’s nothing wrong with that. But not everyone needs a white dress and a cake, and that’s okay too. Planning a wedding (or a non-wedding) should be all about matching your vibe as a couple, and an elopement is exactly what some people want. Either way, Bali is definitely on my bucket list.