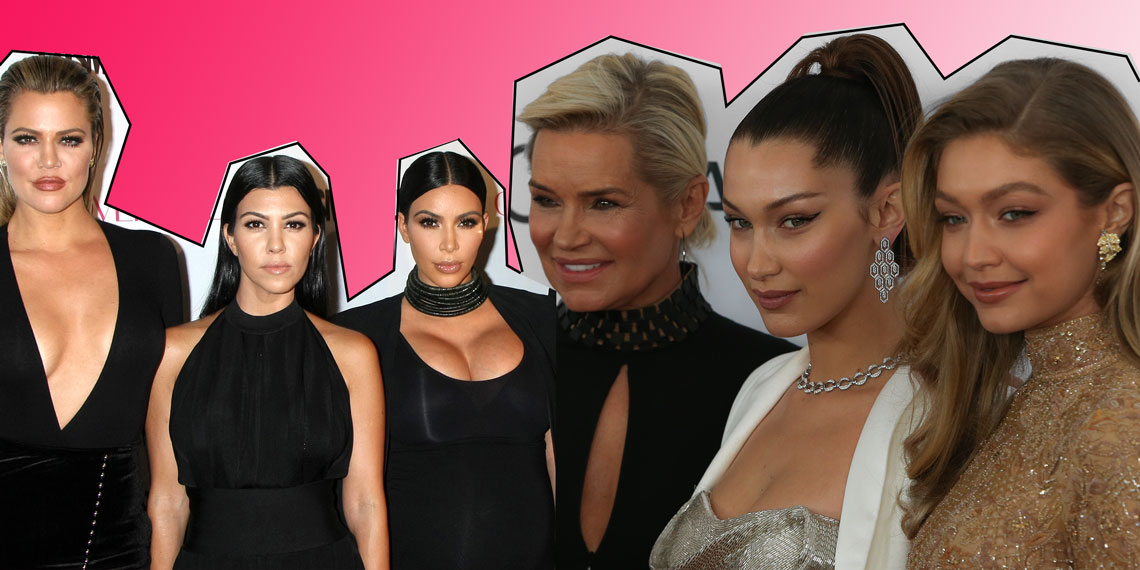 Is there anything better than a celebrity family? While I love talking sh*t about all celebrities equally, there’s something about an added family dynamic that just makes everything messier, and a lot more fun. Obviously kids deserve privacy and blah blah blah, but everyone on this list is over the age of 18, and therefore fair game to roast. When thinking about my favorite famous families, there are some obvious choices, but there are also some underrated ones that don’t get enough appreciation for the drama they bring into our lives. I ranked the best famous families by messiness, so you’re welcome.

No one really knew or cared about the Hadids until a few years back, but times have changed. Gigi and Bella are both major stars now, and their little brother Anwar is quickly following in their footsteps. Add to that their mom Yolanda’s tenure on The Real Housewives of Beverly Hills, and there’s plenty to talk about. The main thing to know about Yolanda is that she had Lyme disease for years, and Lisa Rinna accused her of faking it. It was a whole thing, but back to the kids. After years of on and off dating, it looks like Bella is officially back with The Weeknd, which feels correct. Gigi dated Zayn Malik for a long time before breaking up this year, and Anwar is now rumored to be seeing Kendall Jenner, which almost feels like incest? Their dad, Mohamed Hadid, is a real estate developer worth hundreds of millions, and he’s also best friends with Lisa Vanderpump.

❤️The little girls that grow up to be your best friends forever….. My loves, my heart, my everything, I’m so grateful to get to live life with you @gigihadid @bellahadid #NationalDaughterDay #ProudMommy

It’s easy to forget how big of a deal Jessica Simpson was in the early 2000s. Her little sister, Ashlee, was also a pretty big deal for a while, with her own reality show and a hit album, until her career was ruined by a lip-syncing scandal on Saturday Night Live. Ah, times were so simple in 2004. Ashlee is now married to Evan Ross (Diana Ross’ son), and they have a new reality show together, which I am very much not watching. But let’s not forget that Jessica was the first Simpson to have a reality show with her husband. Jessica’s reality show with her then-husband Nick Lachey is really wild to revisit now, because Jessica was just so dumb. The best moment is when she is shook by the realization that buffalo wings are not made of buffalo meat (but it’s a very close second to the time she thought Chicken of the Sea was made of chicken). Jessica and Ashlee are the famous ones, but the Simpson family wouldn’t be complete without their dad Joe. If you’re wondering about Joe Simpson, think of him as a prototype for Kris Jenner, which makes him a…dadager? Idk.

This family often gets forgotten, because Paris Hilton is the only one who really matters here. Paris is one of my favorite people of all time, whether she’s making a fool of herself on The Simple Life or pretending to DJ at nightclubs around the world. She’s an icon, the leader of a business empire, and the epitome of a betch. Also, her sister Nicky married into one of the most famous families in Europe, the Rothschilds, and I am very jealous. But it’s important not to forget that Paris and Nicky’s aunts are none other than Kim and Kyle Richards, the messy duo from The Real Housewives of Beverly Hills. The drama between the sisters has been a main plot line on the show for years, and their sister Kathy (Paris’ mom) is so above it. For months, both Kim and Kathy weren’t speaking to Kyle, because she decided to produce a TV show based on their life story. The show, American Woman, got canceled after one season, so was it even worth it?

For our generation, the Kardashian-Jenners are the holy grail of famous families. In the past, we had families where multiple generations were Oscar winners or Broadway stars, but I like the Kardashians just as much. I won’t bore you with all the details that you already know, but it’s really spectacular to think about all this family has given us in the last decade. A 72-day marriage. Secret pregnancies. Cheating scandals. Jail time. Lip kits. And don’t forget, it all started with a sex tape. All these other families can try, but no one has ever brought the drama at a level that approaches the Kardashians. The devil works hard, but Kris Jenner truly just works harder.

Season 15 premier of #kuwtk starts now on E! East coast! To all of our fans… I love you guys so much …Thank you for being on this crazy journey with us and for all of your amazing love and support!!!! We appreciate you always. Oh, and buckle your seatbelts. #ittakesavillage #family #love

Look, I know we all hate Donald Trump, and therefore we hate most of his family just by association, but there’s just so much material here. Ivanka paints herself as this iconic businesswoman and champion of feminism, but really her greatest achievement is a clothing line known for making designer knock-offs, which subsequently got dropped from most stores. Then we have Donald Jr. and Eric, who basically do nothing but wear suits and follow their dad around. Oh, and Don Jr. also allegedly had an iconic affair with Aubrey O’Day of Danity Kane, who appeared on The Celebrity Apprentice. I could go in on Melania, but I’ve been done with her since the moment she plagiarized Michelle Obama’s speech at the GOP convention in 2016. My personal favorite Trump is Tiffany, the daughter that DJT basically didn’t acknowledge until he was running for office. While Ivanka is busy fighting for women’s rights (lol), Tiff spent her summer at Lindsay Lohan’s club in Mykonos, so she’s winning. Ha ha ha how tf did we let these people control our country?