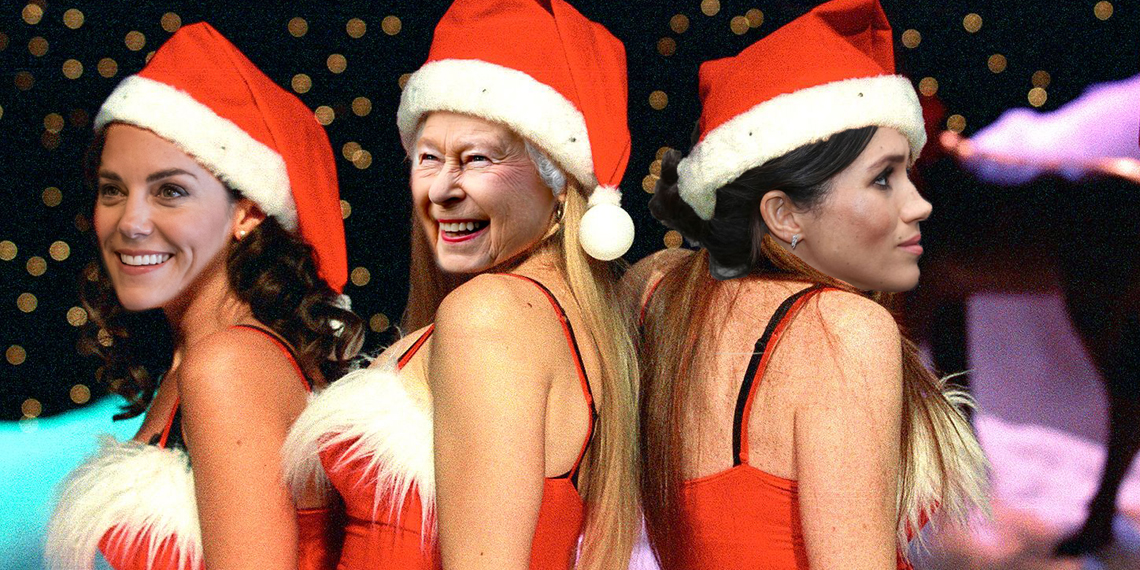 The British Royals As ‘Mean Girls’ Characters, Because Those Flower Girl Dresses Were Disgusting

Oprah’s recent interview with Meghan Markle and Prince Harry was basically a real-life, televised Burn Book. While their accusations are not bound up in a pretty pink book, Meghan and Harry dropped major bombshells all the same. Trade the hallways of North Shore High School for the ballrooms of Buckingham Palace and throw in some English accents, and voilà—you’ve got a modern-day British Mean Girls. In the immortal words of Damian, the Plastics are “teen royalty. If North Shore was Us Weekly, they would be always on the cover.” Substitute “The U.K.” for “North Shore” and The Sun or Daily Mail for Us Weekly, and you’re watching Regina George’s reign of terror all over again. Listening to Meghan recount the bullying, racism, and isolation she endured from the Royal Family and the British press was disturbing, to say the least, and it definitely made me wistful for the days when we could all get along like we used to in middle school. In the interview, Meghan and Harry spilled the royal family tea as freely as Regina stuffed her face with Kälteen bars, so I thought it was high time to imagine the members of the British Royal Family—and the other people involved in “Megxit”—as the characters of Mean Girls.

Just like when Cady began high school after being homeschooled in another country, Meghan was a total outsider and foreigner when she became British royalty. (Can you hear the Queen shouting, “She doesn’t even go here!”?) Also like Cady, she entered an ingénue and was hit smack-dab in the face by the toxicity of her environment. Sadly for Meghan, she didn’t have the guidance of Janis and Damian when navigating the who, what, and where of the British monarchy; as Meghan states in the interview, she had no formal training or instruction on how to be royal. I mean, she had to Google the national anthem and be shown by Harry how to curtsey just a few minutes before she met the Queen. And although Meghan didn’t need to come up with a plan on a chalkboard to take down the monarchy, she still destroyed the Plastics in her own way.

I’m going to come right out and say it: just like Gretchen, who’s always trying to get Regina’s approval, Kate is a classic “pick me” girl, and you just know she sucks up to Her Majesty the Queen constantly. In the interview, we learn that the rumor that Meghan made Kate cry about flower girl dresses is, in fact, the exact opposite of the truth—instead, Kate actually made Meghan cry almost as hard as if she’d told Meghan hoop earrings were her thing. At least we know that Kate gave Meghan an actual apology, and not an, “I’m sorry that people are so jealous of me, but I can’t help it that I’m popular.” I’m also willing to bet that Kate told Meghan that the flower girl dresses were so not fetch.

Like Aaron, who is in the middle of a tug-of-war between Cady and Regina, Harry is in the middle of a tug-of-war between his wife and his family, who has had a hold over him for three decades. As Harry revealed in the interview, until he met Meghan, “I myself was trapped. I didn’t see a way out. I was trapped but I didn’t know I was trapped.” Aaron is also trapped in his relationship with Regina, who controls his every move, until he’s saved by his relationship with Cady (which, after some word vomit, is a much healthier one). Plus, Harry’s hair definitely looks sexy pushed back, whereas William’s hairline is already pushed back off his head.

“The Firm” as Regina

In the wise words of Janis Ian, Regina is “a life ruiner. She ruins people’s lives.” And the Crown nearly did ruin Meghan’s life, in the most literal of ways. Plus, it just so happens that the name Regina means “Queen” in Latin. Like Regina, The Firm is a pro at perpetuating false narratives. Remember how Regina imitated a Planned Parenthood employee to get Taylor Wedell’s mom to think she was pregnant so she’d stop seeing Jason? According to the interview, The Firm also allowed fake stories to spread, refusing to correct the false narratives about Meghan being a diva and rude to her staff (and the thing about making Kate cry, as we discussed above).

The tricky part in this casting assignment is pinpointing exactly who plays the role of Regina. Meghan and Harry were quick to separate the Royal Family from the Crown as an institution (or “The Firm”), saying that The Firm is to blame. Whether this means high-ranking non-royal employees who work for the family or specific members of the family that Meghan and Harry don’t want to name, who’s to say? Personally, my money is on Prince Charles. When it came to the racist comments made about the couple’s future baby’s skin, Oprah confirms that it was not Queen Elizabeth nor Prince Philip, which narrows down the suspects. Harry revealed in the interview that his father, Prince Charles, wouldn’t take his phone calls for a period of time (screening calls is such a Regina move). At this point, Charles has lost Aaron Samuels (aka Harry), and he never had a hot body, so all that’s left is his army of royal enablers.

You’ve heard the rumors about Will cheating on a pregnant Kate Middleton, right? So not grool, and so hard to believe based on the attractiveness disparity between the two… but then again, Jay-Z did cheat on Beyoncé. This is why Prince William makes the perfect Coach Carr. Like Carr, who made out with two of his students, Will has (allegedly) been in an inappropriate relationship. Let’s just hope William is a better sex ed teacher than Coach Carr.

The British Press as The Burn Book

I mean, this one is obvious. Both the British tabloids and the Burn Book are written by some stupid girls (and men) that make up rumors because they’re bored with their own lame lives.

“Raise your hand if you’ve ever been personally victimized by the British Crown” – Oprah, during the entire interview. Like Ms. Norbury, Oprah isn’t taking sh*t from anyone, not even the Queen of England. Ms. Norbury doesn’t let anyone off the hook, including Cady, and Oprah similarly pressed for honesty and healing. They’re pushers, but in the best way.

Regina’s mom is the ultimate attention-seeking parent, with the one key difference being that Mrs. George is actually supportive. As Meghan revealed in the interview, her father, Thomas, spoke to the British tabloids behind her back for his 15 minutes of fame. What a grotsky little biotch. While Mrs. George at least tries to be a good parent (she’s always there to offer a snack or a condom), she and Thomas Markle share the same parental cringe-factor and thirst for attention.

Tyler Perry plays a minor but important role in the “Megxit saga,” revealing himself to be the ultimate sidekick. Damian is always in Cady’s corner, teaching her the ins and outs of North Shore’s cliques and letting her borrow his pink shirt for her Wednesdays with the Plastics. On a slightly more grand scale, Tyler Perry let Meghan and Harry use his house and security detail after they announced they were stepping back from royal duties and the Royal Family revoked the couple’s security protection. We love good friends like Perry and Damian.

On Wednesdays, the Plastics wear pink, and on Sunday, Meghan and Harry spilled tea. Their shocking revelations no doubt hit the Royal Family like the bus that hit Regina George (too bad it wasn’t a double decker bus). Here’s to hoping Tina Fey has a British Mean Girls spinoff in the works.

The Types Of Bad Art Friends You Have In Your 20s

Which ‘Squid Game’ Character Are You Based On Your Zodiac Sign?

Is Squid Game Worth The Hype?

Sami and Jordana start the show with a conversation about the growing interest in streaming TV shows (in comparison to movies and pop music). They also talk about the upcoming release of Adele’s new album, and debate whether or not her best songs are superior to Taylor Swift’s. Then at around 18...