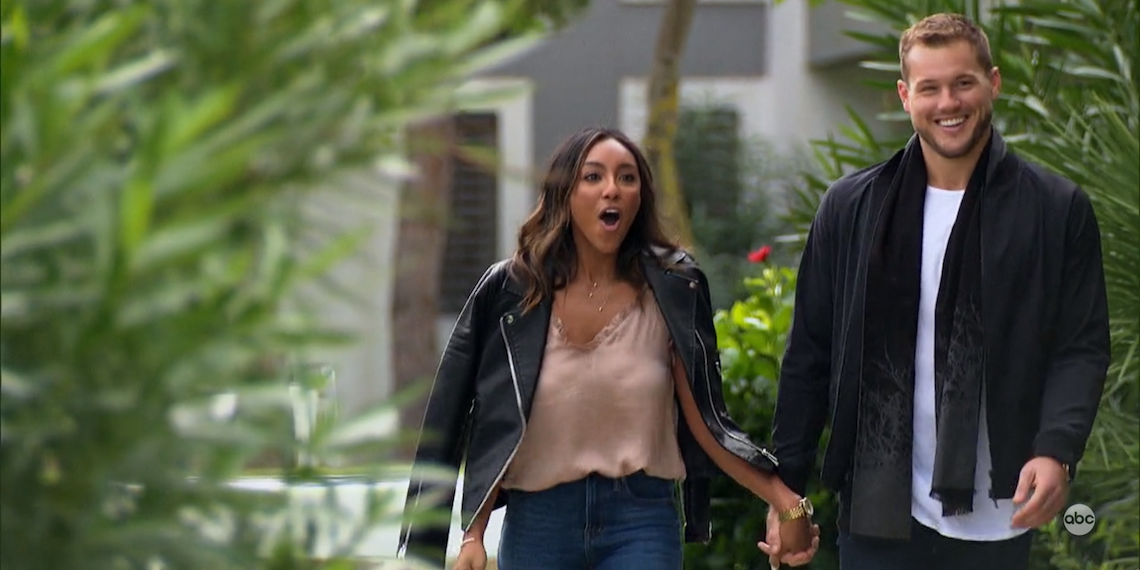 Welcome back to your regularly scheduled Bachelor recap, people! ABC has been teasing all goddamn season that our favorite virgin who can’t drive would be jumping a fence at some point AND TONIGHT IS THAT NIGHT. Hold on to your rose, betches, because it’s finally happening! It’s been a dramatic few weeks for The Bachelor, what with Hometowns being last week and Colton’s virginity up for debate over a questionable Snapchat. For the record, I do think Colton’s a virgin (or at least v inexperienced), because only a virgin and 14-year-old boys trying to sound cool in a group chat would use the term “big tittied hoe.” Moving on. I’ve decided to make things interesting this week and drink every time I would jump a fence during one of these dates. Considering the three remaining women have the combined maturity of a baby’s rattle, I think we should start my funeral preparations now. Let’s get started!

This week starts off back at the last rose ceremony, with Colton asking Chris Harrison where he’s supposed to put it in. Jesus.

^^A deleted scene from this week’s episode!

Meanwhile, Colton just completely abandons the women in the other room. They’re like “I wonder what he wants to talk to Chris about?” and it’s like, don’t worry ladies! He’s only asking where a woman’s clit is—I’m sure he’ll figure it out by next week!

Colton heads back to the ladies to let them know that they’ll be going to Portugal this week for Fantasy Suites. Okay, the women look far too excited about the Fantasy Suites. They do realize that if Colton’s virginity story is actually to be believed, they’ll be lucky if he lasts through foreplay (assuming Chris Harrison even explained to him what that was).

Cut to a montage of all the women reminiscing on their good times with Colton. Cassie’s like, “It’s been an amazing journey” and then the camera pans to Colton grabbing her ass. I do love these producers sometimes. A+ cutting this episode!

First up this week is Tayshia, and I’ll be interested to see if Colton actually sleeps with her. I feel like he’s the most unsure about her, and I highly doubt he’s going to lose his virginity to a girl he’s unsure about. Plus, if there’s any girl he wants to put his dick in first it will be Cassie.

Just when I thought our dates couldn’t get more adventurous…buckle up and tune in tonight ?✈️? #thebachelor

For their date, they go on a romantic helicopter ride and honestly I’m bored. Tayshia’s not saying anything that makes me think Colton will sleep with her, but damn is she trying to.

TAYSHIA: So what else haven’t you done before?
COLTON: R u f*cking serious?

Okay, their banter makes me wish I was born without ears. Tayshia tells Colton that there are “ways to loosen that up” when he mentions his pants being too tight and she’s certainly referring to the obligatory hand job production told her she had to give him later tonight. You guys, the romance in the air tn, it’s unreal!

Moving on to the cocktail portion of the evening. Colton starts out the night by telling Tayshia he can see her boob tape, which is exactly what my senior year formal date told me about the deep-v Tobi dress I wore AND GUESS WHAT COLTON he didn’t get laid either! Jesus GOD. That is not how you woo a lady. Also, do we think she’s flashing him on purpose? Like as a subliminal message? “SLEEP WITH ME, PLEASE.”

I guess the boob tape didn’t work, because Colton tells her that he’s not ready to sleep with her just yet. He’s like “intimacy is a big step” and it’s like, he does realize he has to get engaged at the end of this right?

Damn. Tayshia is pulling out allllll the stops. After Colton tells her he’s not ready to sleep with her she tells him another sob story, because she knows there’s nothing that gets that guy harder than other people’s emotional duress.

TAYSHIA: I just have a lot of trust issues because my ex-husband cheated on me so…
COLTON: So I would never do that to you. I don’t even want to sleep with you right now!

Tayshia isn’t the only one pulling out all the stops, because this entire champagne scene must have been scripted in a writer’s room. They’ve got Colton over here talking about pressure to perform and then prematurely spraying champagne all over Tayshia. It’s a little heavy-handed, even for ABC.

Cut to the next morning and Tayshia’s like “that was interesting.” LOL. That’s not the way you wanna be described, Colton, I hate to say it! I love how Tayshia is trying to hard to make it seem like they did stuff last night and Colton keeps shutting it down by saying “it was a nice conversation.”

Cassie’s up next and I’m already alarmed by her outfit choice. Seriously, wtf are you wearing girlfriend? A turtleneck? On Fantasy Suite night?? The vibe she’s sending out rn is about as sexy as my period panties, but okay.

For their date, they amble around the town square and desecrate historical buildings by aggressively dry humping each other against them. I will say it’s pretty clear that Colton is only into Cassie at this point. A sweet old man tries to dance with her for a second, and Colton The Caveman is like “Hey that’s my girlfriend! My hands are on her ass and everything!”

They find a quiet spot overlooking the city to have a picnic, and watching them try to describe this breathtaking view with their limited vocabulary of “pretty” and “so cute” is making me want to throw this empty wine bottle at my TV screen.

COLTON: Did you think Portugal would be this pretty?
CASSIE: No, I had literally no idea. NONE. Nope. No.

Colton admits to Cassie that her dad didn’t give him his blessing for marriage and she’s acting like she just realized this will all end in a marriage proposal. I’m sorry, but is this your first time watching The Bachelor or something? Is it just me, or does it feel like Cassie is looking for any excuse she can to be eliminated this week? First with the turtleneck, and now with the sudden passion for family values. I can’t.

CASSIE: I’ve never been this confused about something this big

Sweetie, it’s a fake TV engagement. It’s not that big of a deal.

OMG WHAT. Cassie’s dad, who looks less like a father figure and more like someone Scientology hired to to speak to the youths so they could fulfill their 2019 quota, just showed up in Portugal. I repeat: a father just showed up in Portugal. This is not a drill!! I can only assume he’s there to finish blowing up Cassie’s relationship with Colton, right? *turns up volume*

Lol. I love how her dad is acting like they’re super religious and believe in the sanctity of marriage, and it’s like, then you’re gonna have a real hard time watching the footage from this season because it’s mostly Colton slapping your daughter’s ass.

Cassie decides to break up with Colton because SURPRISE, SURPRISE she’s not mature enough for marriage. Kirpa, if you’re reading this, I hope you feel vindicated.

Meanwhile, Colton is out here lighting candles and strategically placing condoms throughout the suite. I’ve literally never been so giddy in my entire life to watch someone be emotionally ruined. Please carry on.

CASSIE: I thought it would bother you more that my dad hates you?
COLTON: It did but, like, I still want to bang you know?

Okay, she is not doing a good job of breaking this to him. She tells him that their love isn’t the same as her parents, and while I do think this show is stupid and her dad is right, I don’t think it’s fair to tell a person that their love isn’t right because it’s not like how love happened to you. This is such a bullsh*t excuse.

She is soooo bad at articulating her thoughts. She can’t even string a full sentence together! All she keeps saying is “I don’t know” and flipping her hair. She’s like a doll that only knows a few phrases and keeps repeating them until someone smashes her head off.

Cassie tries to walk away but Colton finds her hyperventilating by a bush. Omg did he just try and get another ass grab in?? Colton, stop making this decision easier for her!

Colton tells her he loves her and he would literally leave this show for her and she’s just like “Idk.” I can’t believe he just laid all his cards out like that!! He must really be panicking here.

COLTON: There’s no pressure to get married at the end of this.
THE PRODUCERS OVER HIS SHOULDER:

Lol. Colton is like “I love you, I want to be with you” and Cassie just looks f*cking miserable. I don’t know why (it’s definitely the wine) but I can’t stop giggling watching this. The horror in her eyes as they hug combined with the sound of his goddamn body shaking in the background is sending me over the edge here. ABC, bravo.

Colton walks Cassie out and she tells him that she wants him to be with someone who is insanely in love with her, and that feels like a very low blow. The man just said he’s only here for you and this is his own goddamn show!

WHAT. DID SHE JUST SAY I LOVE YOU? Cassie is sending Colton more mixed signals than Colton has about his sexuality all season.

At this point in the evening, I’m 3.5 glasses of wine deep, and every time Cassie breathes I start mentally chanting “fence jump.” I came here to watch a grown man cry and SO HELP ME I better get to see that happen.

We’re eight minutes until the end of the episode and Colton finally breaks. I’m sweating and I may or may not have just let out a high-pitched squeal that sent my dog running into the other room. IT. IS. HAPPENING. Y’ALL.

I love that Chris Harrison is just lurking in the bushes. Someone is like “Chris can you get out here please” and he just pops out from behind some shrubbery. Is this what they pay you the big bucks for, buddy?

CHRIS HARRISON: I’m too old for this sh*t.

They start searching the streets of Portugal and Colton is nowhere to be found. Chris is like “there’s dogs barking down here.” and it’s like, okay Chris Harrison. Chill. You’re not on Chicago PD. No need to show off your detective skills here.

The episode ends with Chris Harrison and a camera crew looking for Colton on the streets of Portugal and whistling for him like he’s a damn dog. We’ll have to wait until next week to see if production was able to lure him out from behind some trash cans with a piece of cheese. Until then, Betches!