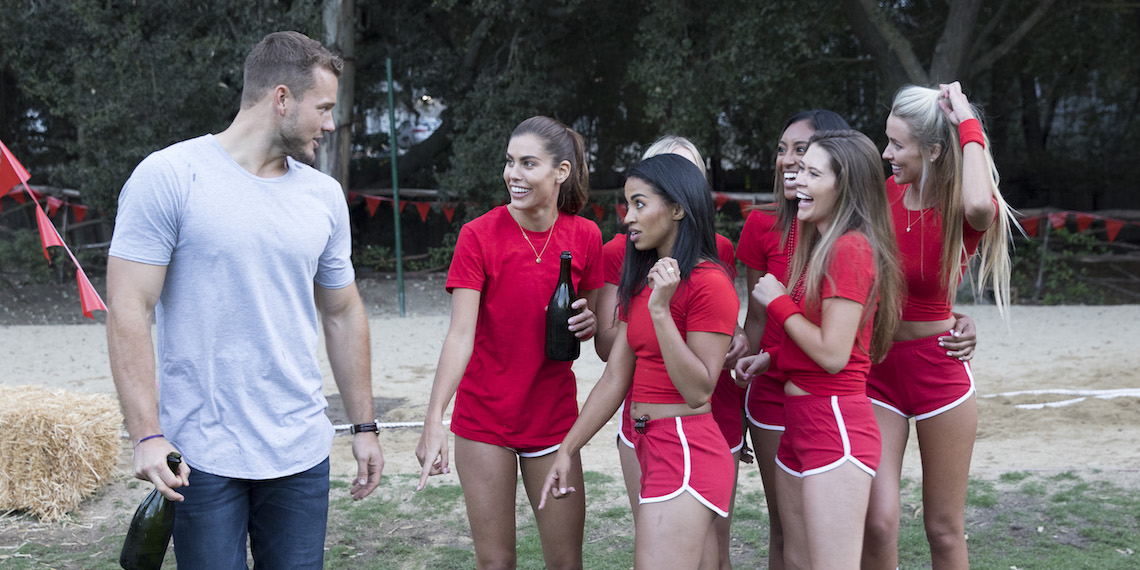 Welcome back, friends, to your regularly scheduled Bachelor recap! For those of you who missed last week’s episode, congratulations! That’s three hours of your life that you didn’t have to watch Shirley’s sh*tty viewing party in Lansing, Michigan. For those of you who did watch, and mistakenly thought that the only reason ABC would hold us all hostage like that for three goddamn hours would be so we could actually see footage from Colton’s season, well, at least we were drunk. I mean, I was drunk. Anyway, moving on. This week, I only feel slightly confident that Ashley I. isn’t going to pop out of the closest bush armed with a microphone and a random couple who were allotted 90 seconds of tonight’s program to get engaged in between Colton’s dates. I’m feeling even less confident about the amount of virginity jokes we’ll be hearing. So shall we get started?

And here we f*cking go with the virginity jokes. The episode opens with Colton sitting shirtless on a bed talking about how tonight, everyone will have to reveal their firsts. This should be good. Why do I have a feeling Demi’s is going to involve a loaded gun and a four-wheeler?

Cut to the Bachelor mansion, where Chris Harrison has the NERVE to ask the women how their first night went. My emotional state after what ABC put me through last week is somewhere around “bought the lighter fluid” and “Googled directions to ABC studios” but, yes, let’s check in with the ladies who actually signed up to be there to see how they’re doing.

Moving on to the first group date. The women are whisked away to a theater, only to find Megan Mullally and Nick Offerman standing on the stage. I’m sorry, WHAT? First of all, Megan Mullally, you are better than this. Second of all, Nick, what would Ron Swanson say if he could see you now?

The girls have to get on stage and describe their most significant “firsts” in their lives, but it doesn’t have to be about their virginities! God, why would you even think that?? No, it can be any “first” they want to talk about, though I have a feeling if it’s not at least vaguely sexual, or won’t somehow bring shame and dishonor to their family name, then they’ll be asked to “rework” the material.

I’m still not over the fact that Megan Mullally and Nick Offerman are on this show. Like, how and why. I thought their careers were doing well! I know they have a new book out, because Nick is practically waving it in front of the camera rn. Is this about book sales? Hmm? Because I’m happy to buy your book, Megan and Nick, if it means you’ll stop debasing yourself for ABC on national f*cking television.

Okay, this date is already making me wish I were dead. The girls are all busy trying to figure out which of their insecurities they should exploit in front of millions of people for a chance with a man who could solve a Rubik’s Cube easier than he could find their clit. Good luck, ladies!

Demi thinks she’s got it in the bag because she’s got “stories”, which definitely means she’s going to talk about her jailbird mom. Honestly, I admire her shamelessness.

(Sidenote: Is it just me, or is Demi a dead ringer for Amma from Sharp Objects? The 13-year-old who murders small children and keeps their teeth for her dollhouse? Sorry, spoiler.)

Like, this girl looks SO young. ABC, can we get an ID check? Please.

Colton is up first, and he immediately starts in on his “the first time I told people I was a virgin” story. The crowd is eating it up, too. They’re looking at him like he said he just survived cancer and not like he just survived some mild locker room bullying. COME ON, PEOPLE! He doesn’t even have a hymen!

Elyse gets up there and admits that she’s the first one in her 30s, and gets an immediate standing ovation from the audience.

DEMI: She’s, like, so brave for sharing her story.
ME, A PERSON THREE YEARS AWAY FROM HER THIRTIES: OLD PEOPLE ARE PEOPLE TOO, YOU F*CKING BITCH.

Demi is the last one to go on stage, and she launches into a story about how she wants to kiss her crush for the first time AND THEN SHE GRABS COLTON BY THE FACE AND KISSES HIM. Omg. That’s the boldest thing I’ve ever seen on this show. I just clapped in my apartment.

Cut to the cocktail party afterwards and the women are livid. They can’t believe Demi would just kiss someone against their will and it’s like, did you ladies even watch Paradise this summer? Women kissing Colton against his will is kind of in his contract. *cough* Tia *cough, cough*

Oh sh*t. Demi just touched the group date rose and she might be hanged for this. She better pray Onyeka left her whistle at home.

Watching Colton flirt is making me so uncomfortable. Like, he’s gay right? He practically just snapped his fingers in a Z formation when he was complimenting Elyse on her stage performance. “Teach me something, honey” are literally words that just came out of his mouth.

Tracy confronts Demi about touching the rose and it’s much like the conversation my mother had with me in college when she asked me to untag myself from Kappa Sig’s Halloween party pics.

TRACY: And I’m not mad at you I’m just disappointed in you, you know? Please do better.
DEMI: Totally. I’m totally sorry.
ALSO DEMI:

Elyse gets the group date rose and I’m a little shocked. She didn’t even really say anything to Colton? I guess he must really be into that power reversal she insinuated.

ALABAMA HANNAH: Did you know it’s my birthday today??
COLTON: Is it? That explains why producers made me pick you…

Okay, this date is soooo painful to watch. Colton strings together a very basic sentence for a toast and asks her to do the same, only she’s acting like he just asked her to perform brain surgery on that chaise lounge. Just say “cheers” or something! My god!

Wowowowowow she doesn’t have two brain cells to rub together, does she? They’re just sitting there in complete silence while she’s struggling to come up with literally anything to say. OMG. ROLL TIDE ROLL. DID SHE REALLY JUST SAY THAT. “Happy birthday to me” and “Roll tide roll” are the only words her poor little pea-sized brain could come up with. Someone needs to give this girl a drink. Or ten. SOS. She needs some serious help.

COLTON: You feel like you have to be perfect, and I get it. I felt like I had to be perfect. And look at me now? I’m  the Bachelor. Feel better?
ALABAMA HANNAH: ….yes?

Alabama Hannah decides that she’ll open up by asking Colton about his virginity. SERIOUSLY. That’s all you’ve got?? She was so unbelievably awkward this entire date, and she thought asking the most personal question possible would be the way to remedy that??

Hannah gets the rose, but only because it’s her birthday. There’s no other reason she makes it another week after that date. ABC is not about to dump a pageant queen on her birthday. They save that sh*t for the finale.

Moving on to the second group date. The girls are invited to “Camp Bachelor” where they play Red Rover and Duck Duck Goose with Colton. If we didn’t know he was a virgin before, we certainly do now after watching this 12-year-old boy’s pre-pubescent fantasy dream date. Like, he hasn’t even graduated to the truth or dare phase of life yet!

Billy Eichner shows up and again I have to ask, why though? I thought he was doing okay for himself? Like, what does ABC have on these people to make them humiliate themselves like this on national television?

Whoop, there it is.

Billy Eichner, ladies and gentlemen, saying what we all want to say.

Okay, but how much do we think Billy wants to kill himself rn? I can just hear it in his tone as he shouts “spicy mustard” in the middle of the yellow team’s huddle.

The red team wins, and they get to camp out with Colton for the night. So, let me get this straight. The other girls get to go back to the mansion and these girls have to sleep in their clothes in a dirty cabin? Who really won here?

Why do I feel like Colton is going to dump this “never been kissed” girl? I have a feeling he doesn’t want another virgin in the house. He wants to be the only one with a hymen.

Damn, I’m wrong again! Colton gives the group date rose to Heather for “opening up so much.” Lol can you imagine if this girl makes it to the fantasy suite? The camera will pan to a bowl of cherries and all we’ll hear is 10 seconds of Colton grunting and Heather crying in the background. Or was that just my first time? Lol I’m so random!

It’s only the second cocktail party of the season and the girls are already a house divided. Demi thinks that the “old” girls are panicking because they haven’t gotten any roses. I just love that Demi thinks 27 is old. To be fair, when I was her age I also thought 27 was ancient, but now I understand that just because you’re pushing 30 and can legally rent a car, that doesn’t mean you still aren’t trash.

Tracy is, like, one glass of champagne away from setting Demi and her closet full of sales rack Wet Seal clothes on fire. She wants to have a moment with Colton, but just as she gets some alone time with him Demi steals him away in a robe.

RANDO IN THE HOUSE:

Actually, she doesn’t. Her mom is in jail, you know this Jocelyn!

Honestly, Tracy is acting insane. I hate to side with a girl who probably just learned how to use a tampon last week, but Demi has a point. She shouldn’t be crying in a corner if she wants to actually get a rose later. Sack up, Tracy!

Final rose count: Angelique, Alex B, Annie, and Erika all get sent home, which feels fair because I can’t recall a single detail about these women.

And that’s all for this week! Tune in again next week when *spoiler alert* Colton will talk about his virginity! I’m sure we’ll all be waiting with bated breath.