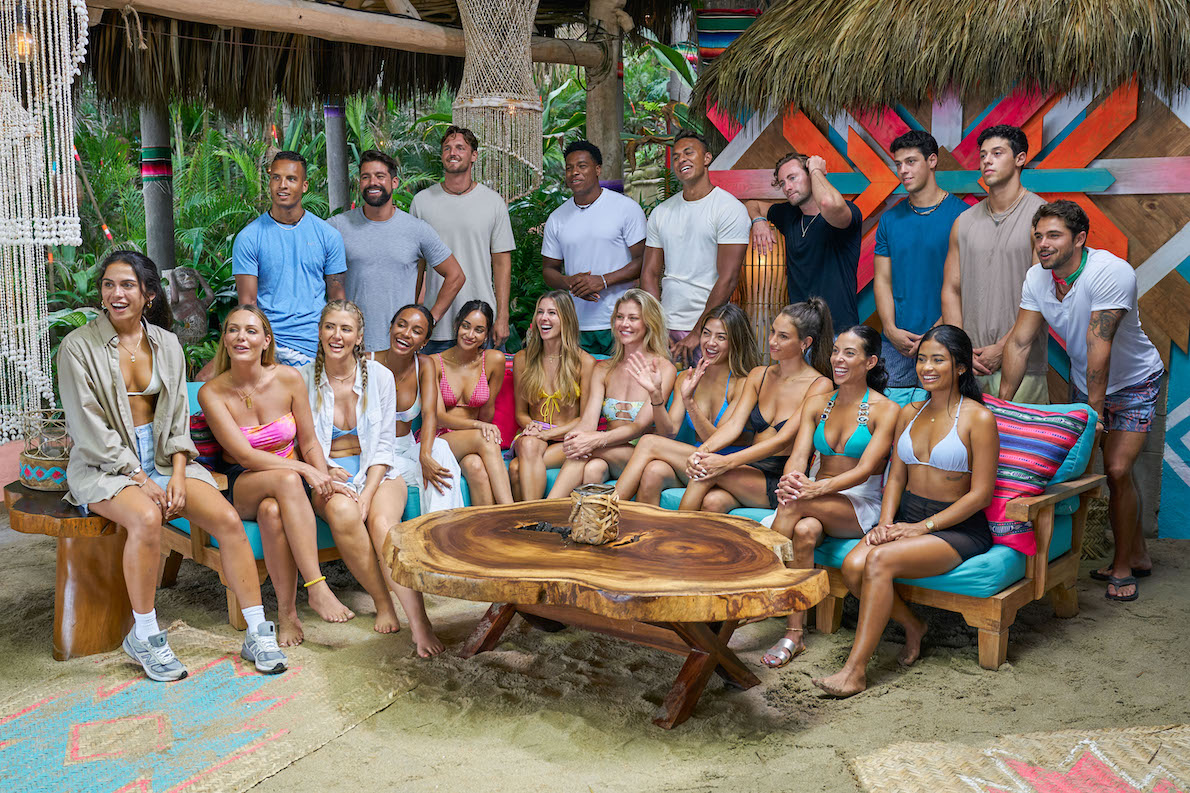 Welcome back to the beach, betches! Count your blessings because this SHIT is almost over. It’s like the abyss I’ve been screaming into for the last nine weeks finally acknowledged my existence. Peace and blessings. I say “almost over,” because tonight’s episode is actually not the finale. ABC has decided to drag this thing out into another four-hour, two-night, spectacular waste of my time. As if I have not sacrificed enough for this show already! Free time, relationships, sanity, sleep, and giant chunks of my hair—all gone in the name of “love.” I hope they know what I do for them.

Let’s get into it!

Tonight’s episode begins with the last rose ceremony of the season—as if time or rose ceremonies means anything to this franchise anymore. But it is kind of a big week for the couples. Supposedly, Fantasy Suites and proposals are right around the corner. This means they’ll have to take a long, hard look at the partner they’ve been exchanging backwash and bodily fluids with, and decide if they would like to do that for the rest of their lives—or, if they would even acknowledge that person in airport in a week’s time. Only time will tell.

Mara is the first to self-eliminate. I’m using that term loosely, of course. Self-elimination implies a sort of pride or dignity, or at the very least a marginal sacrifice on the part of the eliminator. Mara’s exit was more like an elaborate luring off the beach in the same way Winnie the Pooh is often lured into chaos by promises of honey. Mark my words, on screen it may look like Mara is leaving of her own volition, but off screen, production is dangling Jacob’s banana leaf jockstrap and hoping she follows it into an awaiting cab.

^live footage of Mara “hailing a cab” to the airport

With Mara out of the picture, no one technically has to go home. Jesse Palmer must sense that the stakes are too low, and so is my waning interest level in this godforsaken season. He tells the idiots that the cocktail party is canceled in the hopes that one of them panics under the pressure and accidentally ruins a life. Let’s see how that goes for them:

It all comes down to Kate and Logan. Despite their ups and downs, Logan seems sure of his decision to give her his rose. “We’ve walked through fire together,” he says, but the fire is just Kate using his credit score as her stand-up material.

LOGAN: We’ve been through so much, but it only makes us stronger. I want to be with you no matter what. Will you accept my rose?
KATE:

Kate tells Logan that she can’t be with him. It’s not him, it’s his orange Honda. To be fair, she has been pretty consistent about her feelings. She wants stability, safety, and, most importantly, the hefty bonus production promised her, should she successfully mutilate a man’s confidence on national television. Never settle for less, sister!

My favorite part about the breakup is Jesse Palmer taking the time to twist the knife even further. He’s like, “Sadly Logan, you’re no longer in a relationship and there’s absolutely no one who would accept your rose at this point anyways, so adios bitchacho!” Jesse!! Can’t you see the man is distraught? Kate just left begging god to bring her a man with a “Big dick and an even bigger bank account,” and you’re rushing Logan out like you’re worried your piña colada is melting off screen. Show some compassion, man.

The next morning, Jesse tells the beach trash that Paradise is over. To that I say: WE SHOULD ONLY BE SO LUCKY. Do you promise, Jesse?? But the contestants are not taking the news as well. They thought they’d at least get another few days to destroy what’s left of their livers and their dignity. Instead they’ll have the day to decide if their relationships are ready for the next step.  The energy in the room is very much my dad yelling “Get a job!” as I try to explain to him that my job actually is sitting on the couch and writing about this shit.

The couples have three options: stay on the beach and try to get engaged, leave the beach together as a couple but not engaged, or leave the beach separately, both more bloated and single than they were when they arrived. Let’s look at who chose correctly and those who are going to be replaying this exact moment to their therapist in 3-6 months when asked if they can pinpoint where it all went wrong:

Tyler + Brittany: Okay. Right here, right now, Tyler looks every inch the boardwalk game stand owner he is. They sit down on the daybed, and I can’t help but think that he does not look ready to be engaged. He looks ready to haggle you into spending $100 on on a water gun game in the hopes of winning a stuffed monkey the size of a 4th grader, but not engaged.

That does not stop Brittany from wishing that this carnie would tell her he loves her. “I need an ‘I love you’ if we’re going to leave the beach together,” she says. I would need much more than that from this man. For example, a signed statement that says the business he owns is not a t-shirt stand in Jersey that sells any kind of apparel with the words “shawty” written on the butt. But to each their own, I suppose. Tyler says he loves her and they leave the beach together.

Shanae + Twin: I think it’s hilarious that The Suite Life of Zack & Cody over here thinks he’s going to leave Paradise with a girlfriend. Shanae is never going to seriously date you, buddy. Your voice just cracked when you asked where her head was at!

Shanae says that she is looking for a husband, not some guy who still lives with his parents. EXCUSE ME!! How are we just now finding out the twins still live at home with their mother? Like, did they have to get a permission slip signed before they could come on the beach?

SHANAE: It would never last. We’re from two different worlds. I don’t even understand how TikTok works.
TWIN: I don’t even use TikTok that much!

That’s right. His mom has a strict “no electronics after 9pm” rule. Don’t get it twisted, Shanae!

Other Twin + Aussie Hottie: Lol, come on. Do I even need to say it? They break up and leave separately.

Aaron + Genevieve: If I never see Genevieve on my screen again, it will be too soon. Production has been shoving these two down our throats all season, but you can’t convince me that a man who drinks that much protein was ever on that beach for any reason other than to inflate his own ego.

Genevieve says that Aaron’s been acting cagey all day and she doesn’t know what he’s thinking anymore. Cue Aaron breaking up with her moments later. He says that he doesn’t think this will work outside of Paradise, mainly because he doesn’t want to wake up one morning to his apartment set ablaze after calling Genevieve “beautiful” instead of “gorgeous.” I don’t particularly care for Genevieve’s personality and have, in fact, drunk enough wine to irreparably damage the memory-making part of my brain in an effort to dull said personality, but I do think Aaron went on this show for selfish motives and wasted her whole Paradise experience.

GENEVIEVE: I just wasted all of my time on a man child—and that’s big facts.
MY LAST REMAINING BRAIN CELL HAVING TO RECAP THIS RELATIONSHIP:

Michael + Danielle: I have nothing to say about this couple. I know I’m supposed to root for their trauma bond or whatever, but MY GOD do they make for boring television. My shampoo bottle has more compelling features than these two put together. They decide to leave as a couple. Fine. Good luck to you both!

Serene + Brandon: Wake me up when this show gets interesting. Of course these two are headed to the Fantasy Suites. Imagine being production, and the only talent you have left at the end of the season are Brandon and Serene. Don’t get me wrong. These two make a gorgeous couple. Seriously, it should be illegal for two people with faces that symmetrical to procreate. But they give us nothing in terms of personality and entertainment. This is going to be a LONG finale if these people are to make up the majority of Tuesday’s narrative arc. Thoughts and prayers for us all.

Victoria + Johnny: Johnny is not ready for an engagement. He wasn’t ready for an engagement 90 days ago when he was dating Gabby on The Bachelorette, and he’s certainly not ready now. As Johnny says, “An engagement is forever.” He seems to understand that the stakes are high, and is hesitant to jump into anything too serious with Victoria. Victoria seems ready to be engaged, it doesn’t matter to whom. It could be Johnny, it could be (SPOILER, SPOILER, SPOILER) Greg Grippo, it could be a tree stump. Just somebody for the love of god put a ring on it.

I’ll save my thoughts on Victoria for after the finale episode airs. Johnny seems very insecure. He admits that there’s nothing he likes about himself and he’s always felt inadequate. He’s worried that he’ll finally open up to someone and she’ll dump him for another guy, which is seemingly what Victoria does after the finale. I’ll reserve my judgments until after I’ve watched the Tell All, but things are not looking good for my favorite Florida Man…

And that’s it for part one of the finale! Until next time!