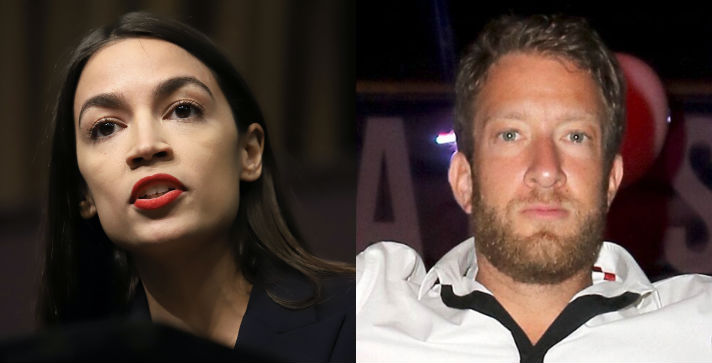 The Barstool Sports Founder Is In A Twitter Feud With AOC

Dave Portnoy, the founder of Barstool Sports, appears to be having a Trump-like breakdown today, illegally threatening to fire any employees who unionize, or rather, even DM about unionizing.

This man calls himself “El Presidente” so I don’t know why anyone’s surprised that he’s a controlling maniac, and a quick browse through his Twitter shows a movie-esque villain desperate for attention anywhere he can get it. And that’s to say nothing of a survey of Barstool’s nauseating editorial offerings, which at one point included a slut-shaming opus about a 23-year-old college student who was found murdered.

While we all know people like this, it’s a whole different ball game (sports reference, thank you) when the person tweeting nonsense actually has power over the sizeable staff of Barstool Sports. While Portnoy sold majority control of the company to Chernin Group in 2016, he’s still in charge of content and clearly has major pull on anything that happens around the office.

The Twitter drama all started on Monday when Portnoy tweeted out an old rant published to Barstool  about how much he hates unions. He was apparently inspired to re-up the rant after hearing the news that The Ringer, another online sports publication, announced their intention to unionize with the Writer’s Guild of America East.

Portnoy like realllllly hates unions, so much so it seems like they send him into a psychotic break, although that may just be his constant state of being. The rant from four years ago, which Portnoy originally posted after news broke about the unionization of Gawker employees, seems like something most self-respecting media people pray would never resurface.

Imagine your boss threatening to dump rats in the wall and mocking you for thinking you deserve health insurance. Ah, being a writer in New York City, it really is the Carrie Bradshaw fantasy!!

After Portnoy reposted his views on unionization that at any other company would be considered a PR nightmare, Rafi Letzter, a staff writer at Live Science, which is unionized under the WGA East, tweeted an offer to share information on unionization to anyone from Barstool who DM’ed him.

The National Labor Rights Act of 1935 prohibits unfair labor practices, which include attempts “to dominate or interfere with the formation or administration of any labor organization or contribute financial or other support to it.”

You would think this would send shivers down the spine of any company founder and they would immediately come to their senses and tweet an apology or at the very least an explanation of their extreme views. But not “El Presidente!”

Now since Commander Waterford Portnoy is tweeting to the world that he will illegally fire any employee who even discusses unionizing, you know he’s monitoring what his employees are messaging about so…under his eye Barstool, under his eye.

When people started tweeting back at “El Presidente” (puke) that threatening to fire employees for anything involving unionization is like…super illegal, he double downed on his stance while simultaneously bragging about his all mighty sports blogger power.

And they say all the good guys are taken!

Even the New York State Department of Labor chimed in to set the record straight.

It is illegal to take any unfavorable action – including termination – against employees for union-related activities under the National Labor Relations Act.

New York is a proud union state. We say no way, no how to intimidation, threats and union busting. https://t.co/r71he7K2kl

To which “El Presidente” didn’t directly respond, perhaps because he was too busy inviting Representative Alexandria Ocasio-Cortez to debate him after she tweeted her two cents.

Has this man not watched the news in the past year!? You will not win a debate against AOC bro! It’s like watching the Knicks challenge the Raptors…stay in your lane man. (2nd sports reference somebody please call my Dad!!)

Whether Portnoy is serious about his threats or just terrible at joking — which judging by a brief look at the Barstool Homepage he is — the point is, it’s only a matter of time before he’s canceled, whether it’s this scandal that takes him down or June from “The Handmaid’s Tale.”

Until then, he’s enjoying giving President Trump, kindred spirit, the day off as the most outrageous white man on Twitter.

Oh, and just in case you’re not caught up Portnoy, the bad guys aren’t doing so hot in The Handmaid’s Tale!