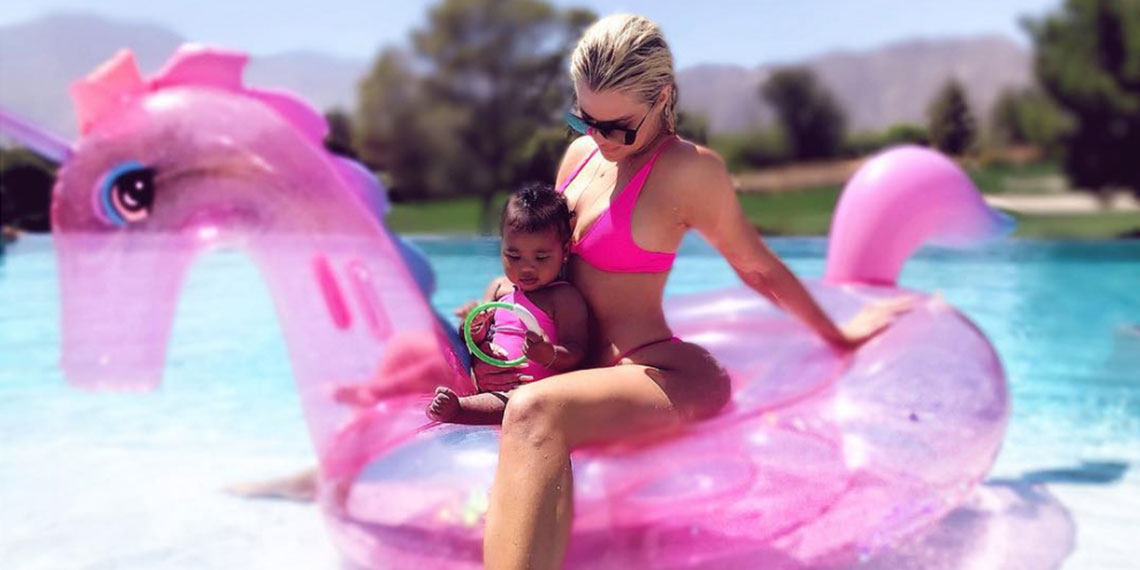 This is a PSA: Khloé Kardashian, for the love of God, will you (and your entire family for that matter) put down the poorly made editing apps? I already did an entire article on Kardashian Photoshop fails alone, and honestly, it took every ounce of self-restraint to not make that article 500 entries long. The Kardashians are just so bad at Photoshop! And I don’t even get why?? Number one, they are one of the most gorgeous families in America, and they should really be happy with the way they look. Two, they have (I assume) full-time teams of makeup artists, stylists, trainers, and plastic surgeons at their beck and call to deal with their dissatisfaction—they should not have to take out their issues on editing apps. Number three, and I said it before (but I’ll say it again), they have enough money that they could easily hire experienced graphic designers to manipulate their photos before they post. I mean, if you’re gonna erase chunks of your body (why? you all look amazing), at least do it the right way.

A short while ago, Khloé caught flak for making herself took tiny and her head look huge. This weekend, she was back at it again with a monstrosity of an Instagram post that’s going to take me several suitcases to unpack. You think the bad Photoshop can’t get worse and then you see something like this:

Here is what I do not understand. Khloé looks amazing rn. This pic is adorable. I’m sure the original picture required zero edits, but especially such poorly done ones.

Me to Khloé, but like, replace Britney with “YOUR PHOTOS”:

As a Photoshop expert and digital artist, I’m going to go ahead and tell you everything that makes this photo seem a bit off. Hopefully you’ll learn something and won’t make these mistakes when editing your own photos. Or, even better, get some self-esteem and stop pretending women are supposed to be freaky, blurry demogorgons with no fat!

More like too skinny arm. Let’s just dive right in here (no pun intended). Okay, this is the first thing I noticed wrong with the photo. I’ve blown it up, so it’s pixelated everywhere, but you’ll notice it is VERY blurry around the edges of Khloé’s upper arms. In fact, part of her bicep has a bit of a tumor (?) that is threatening to leave and join the grass behind her.

In fact??? Her whole arm is wavy and has chunks missing from it?

Girl, you might need a doctor to check that out. It looks to me like the arm was pushed in on either sides, thus the extreme blurry edges, to look thinner. You can especially tell because the shadow on the bottom side of the arm is missing RIGHT where most woman get some arm fat. She forgot the bulge which is either probably where the real arm was, OR it was too difficult to do on the app, because of the grass shadow behind it. It also looks like she smoothed out the entire top part of the arm. It looks weird all around.

Problem 2: The Pool Edge Is Wavy

In Khloé’s attempt to thin her arms, she did the *BIGGEST* editing giveaway ever. She messed up the lines around her. When Khloé moved the background to squish in her arms, she also further indented her armpit area, pushing the pool up to make it all look smaller. However, the pool is unaware a Kardashian is in it/in front of it, and therefore would not move its concrete edges to accommodate them. The pool wall should be straight across, not suddenly jumping half a foot higher into Khloé’s armpit.

Did Khloé have that same surgery that we somehow all heard about in 8th grade, where Marilyn Manson had to remove a rib so he could suck his own dick? 1) Why did everyone hear this rumor? 2) Whoever started it deserves a medal. I went to four different schools that year, and in different states, and somehow it made it to all of them. Anyway, Khloé forgot to leave room for internal organs and ribs in her editing, as many a Kardashian does. Sorry, it doesn’t matter how thin you are, your body would not be a perfectly smooth (and very blurry) line in this position. You can see the difference in the ripples and hard lines where she stopped editing where her bikini bottoms fit and below. She cut her rib cage clean off for this edit and also made the following mistake in the process.

Problem 4: The Water Is Not Wavy

In Khloé’s attempt to make herself a lumpy-armed, ribless beauty, she forgot that water moves. I think she edited her waist/arms by smearing the pool around her, which is how the pool edge became uneven *just* under her arm. This also created a problem, in what is really the Bermuda Triangle of Photoshop Fail in this picture. Water moves, guys. I don’t know if you knew that, because Khloé somehow did not. In fact, you can see the uneven water ripples everywhere around them, except the part of the pool in the Bermuda Triangle of Photoshop Fail. There, the lines are *perfectly* parallel. Too perfectly, actually. This is what happens when you destroy the background by using a cheap editing app and not hiring a pro. Though, given how badly their professional photos are edited, I can’t blame her for not wanting to spend the money.

Problem 5: A Chunk Of Her Ass Is Missing

This one I have no explanation for. What exactly were you trying to do, woman? Is this a result of blurring the background so poorly? Did you try to make your ass bigger and missed an entire section? Unclear, but definitely a huge fail. Good job creating yet another unrealistic expectation for women’s bodies.

In conclusion, what could have been a totally cute photo got massively f*cked up due to Mommy’s vanity. Khlo, u ok? I know you’re going through some sh*t right now, but please remember you’re some kind of f*cked up role model for women, and you have to remind them that it’s totally okay to have stomach rolls, arm fat, unflattering poses, blemishes, cellulite, and ribs. Also, this of it this way: if you just left your photos alone, you would not have tumor arms or chunks out of your ass missing. Thank you for coming to my Ted Talk.