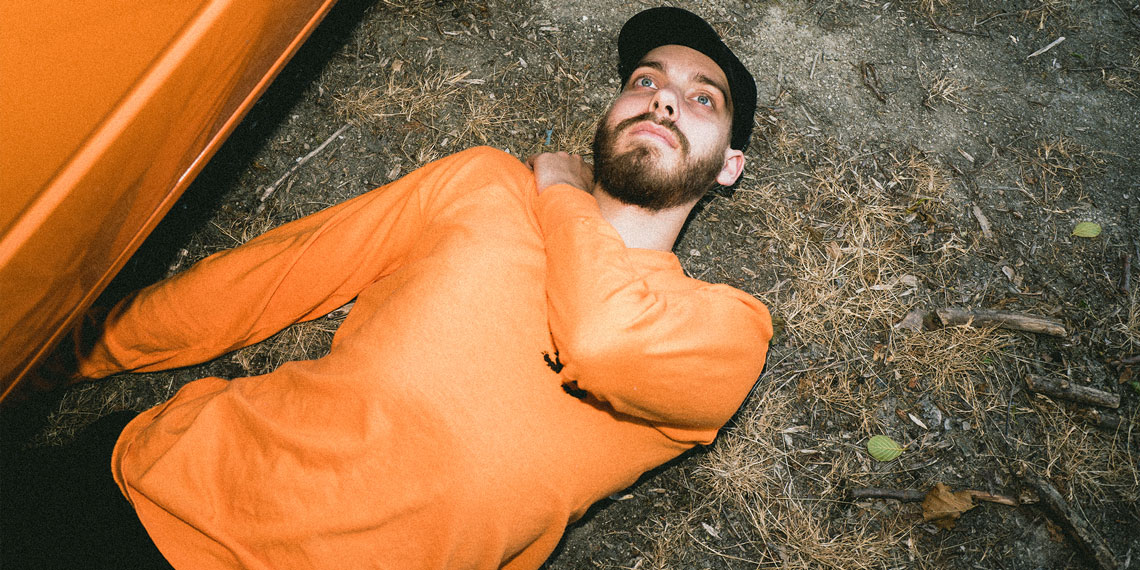 San Holo On His Music, Stage Name, And Why Birds Are The New Cats

Known for pushing the boundaries of EDM, Dutch guitarist, DJ, and producer, San Holo has taken his taken his musical talents internationally. Live instruments combined with his electric sound have made him one to watch. His debut album, album1, is set to release on September 21, but we caught up with him at Electric Zoo 2018 to learn about his musical background, how his stage name came to be, and more. We started off the interview asking him about Dutch people and how he thinks they differ from Americans.

Betches: So you don’t think Americans are straightforward?
Well, I do, to a certain degree. Americans would also be like, “Oh my God I loved your set” and just not love it at all. And if Dutch people don’t like something they’ll be like “eh, it was okay, not really my thing”.

I really did like your set though, I loved how you came out and played the guitar.
Yeah, I’m bringing more live instruments into my electronic music, to kind of make it more organic, lively and colorful.

And you are a really talented musician, do you feel like people underestimate your talent because you’re a DJ?
I don’t think that people are underestimating me, but I think there’s like a prejudice about DJ’s like that they’re just pressing buttons and not making anything. Which is very common, which I understand because there’s obviously a lot of stuff out there, I don’t know if I should talk about it, but there are plenty of DJ’s who don’t make there own stuff you know? There are plenty of DJ’s that are just their brand, and they just press play. But I think there’s this new wave of producers that are very invested in making their own music and making their own sounds and making their own style, that I think is very respectable.

Is there someone that you’re particularly influenced by?
Most of the time I don’t listen to electronic music at all, I don’t listen to EDM in my spare time, I listen to bands like Bon Iver, Sigur Rós, Explosions in the Sky, very like indie bands that inspire me. I take those sounds and put them in my electronic productions. But, I think there are some great musicians out there in the EDM world like Porter Robinson, Jai Wolf—to me they bring musicality and cords and melodies back into the music, you know? There’s so much EDM out there, there’s like very dark, dark… how do I say that without sounding like a d*ck?

It’s okay if you sound like a d*ck, it’s kind of our personal brand.
There’s so much trap sh*t out there that just sounds like one note all the time, like dark. And there’s this new era coming out with people who have musical skills doing that sound with cords and melodies. I think melodies will win in the end. Melodies and songs will stay, will last.

I feel like you can kind of tell also when someone has a music education behind them.
Well the thing is… I know some uneducated people that make the most beautiful, colorful music I’ve ever heard, but I think in the end the songs and the songwriting, a vision, will last longer than just releasing bangers with crazy sounds.

And I do feel like I got that also in your new song that came out today.
“brighter days,” yeah. That’s one of my more uplifting songs I think. It’s a very danceable hopeful song.

And how did you get linked up with Bipolar Sunshine?
We met at Coachella, he was, I think he was doing a guest performance with Petit Biscuit and he just came to my trailer and we talked. Then next week I was in LA in an Airbnb that I wrote the entire album in. I rented this Airbnb for half a year and just locked myself up in the Airbnb. He came by and we wrote the song in like two days. And we recorded it in the kitchen and we literally just had a laptop, two speakers and a microphone and made the entire album with that. No expensive stuff, no super hi-fi studio. Just a room with a laptop and a microphone.

We recorded that song, and ever since I heard his voice on the song I felt like it was something special. I think his voice is so unique; it’s so imperfect that it’s perfect to me. He’s not the best singer I’ve ever heard, but that’s the beauty of it. His voice has so much character.

That’s really cool. And Coachella, you were there this past year?
Yes, I played Coachella, both weekends and it was life changing to play there. Crazy to see my name on that flyer with like Beyoncé. I was like wow, is this like a thing? I’m playing these shows right now… Coachella was definitely one of the highlights of my career or life right now.

I feel like I’ve seen you on the bill at a lot of festivals, I went to like Shaky Beats in Atlanta and saw you there.
Oh my God, Shaky Beats is one of my favorites, to be honest, I didn’t know you’d know that.

I was there, it was like my first time and I loved it.
Yeah, I didn’t mention that because it’s kind of a smaller thing, not as big as Coachella, but like Shaky Beats was sick right? Where was it again?

Atlanta.
Oh Atlanta, ATL Hoe. First time I played in Atlanta and people started saying “ATL Hoe” I stopped the music and was listening like, what are they saying? Like, I’m from Holland, what the f*ck? But Atlanta was sick. I loved it.

Yeah, I feel like you had a pretty fast rise to fame. It seems like you blew up really quick.
I think so yeah. I was a guitar teacher for seven years before this started. I taught guitar to everyone, like kids and adults for like four days a week, and whenever I got back home I’d work on my own music. I just think, I spent a lot of time working, whether it was guitar lessons or my own music. Maybe to you it felt like a fast come-up, but for me, I put a lot of work into this already, before you ever heard of me.

So speaking of your guitar, I read on Twitter that your guitar keeps getting lost on airplanes? What’s that about?
Yeah! I don’t know, especially in Europe for some reason. I have to check them in at the bulky luggage, the bigger luggage. For some reason they always mess it up, then I’m there without a guitar and I have to rent another guitar. But in America, it’s been great—actually in most places I can take my guitar, I put it in the lockers or the closet and they’re like okay, it’s fine. So that’s what I really appreciate about America, you respect artists on planes more than Europe does.

I also read that you really enjoy birds.
Birds? Oh my God, birds. I told people two years ago birds are the new cats. Birds are the new everything. Now you have to follow some birds on Instagram, Alex the Honking Bird is beautiful. I love birds, also because of my label, bitbird. There’s no animals that are cuter than birds.

Is there a specific type of bird you like the most?
Yes, I love Cockatiels with the little like, I don’t know what it’s called, the feathers. Also I like Gouldain Finches, they’re beautiful.

That’s awesome. Also, I wanted to talk about your name and the inspo. Was it meant to be a Han Solo pun?
So, five years ago I was making beats with my friends, I was doing Dutch hip-hop, and they were like Sander van Dijck, you need a cooler artist name. What about San Holo, and everyone started laughing and I was like okay, San Holo, it kind of has a ring to it let’s go with that. It just blew up, all of this blew up and I was like, I’m stuck with San Holo. At first I was scared people wouldn’t take my music seriously, but I think they do. I think it grew past the funny meme thing like now it’s a real thing. We actually own the name in America, San Holo.

My final question is: what’s your favorite meme right now? Cause you put this picture on Twitter and you’re like “caption this” and I saw all these crazy Photoshops, so I was like okay, this guy likes memes.
It’s just very inspiring to see what the internet can do with a plain picture. You can literally just upload any picture and ask people to caption or meme it, and what comes out of it can be so funny. Like sometimes I try to think of something funny and I can’t think of anything funny and I post a picture, like “make this funny” and people will turn it into something hilarious that I never thought about. I think that’s the beauty of the internet. There’s just so much creativity out there.

People that are able to make a plain picture into something funny are very talented I think because, in the end, I think humor is one of the biggest things. Like humor and funny things is what drives people the most, things that make people smile and happy is what for some reason people love. I notice on my Instagram whenever I post a serious thing people are like oh, cool, but whenever I post something stupid and funny, people go all over the place. I think it’s maybe because life is so hard sometimes; people just want to see things that make them happy.

Experience San Holo for yourself as he starts his 35 show North American tour on October 31!