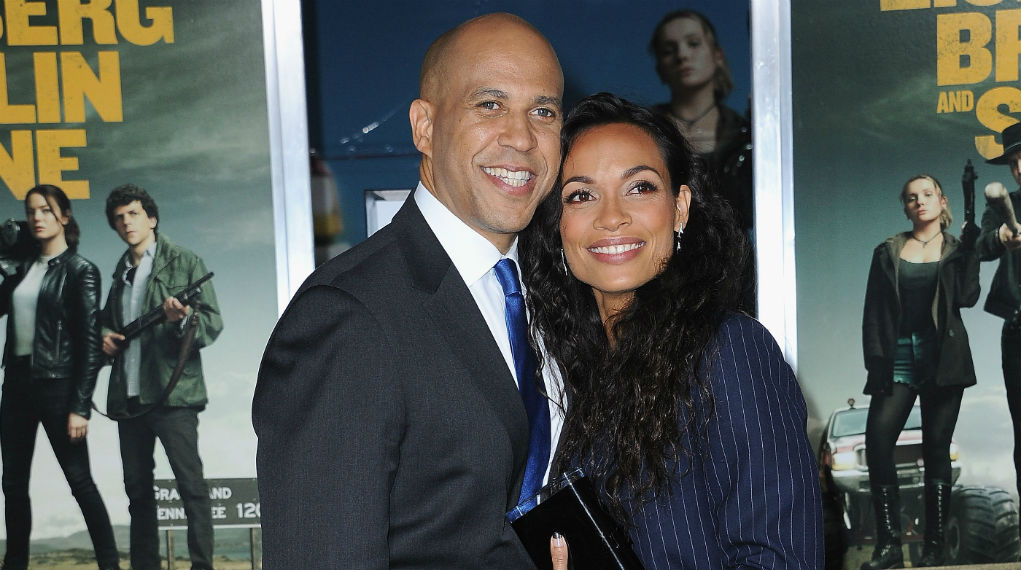 As a musical theater fanatic who also happens to be a vegan Democrat from New Jersey, there are few celebrity couples that have checked as many boxes for me as Rosario Dawson and Cory Booker. A Mimi at heart, I’m very excited that my vast knowledge of RENT is somehow now kind-of, sort-of related to politics.

Dawson is not a celebrity who opens up a lot to the press, but she was recently profiled in the Washington Post and talked about this whirlwind of a year for her and Booker, the senator from New Jersey pursuing the Democratic nomination for president. Not only did they just celebrate their one-year anniversary on October 14th, but you know, he sort of is running for President, which definitely changes things for a relationship.

While Cory Booker, 50, is out campaigning, Dawson, 40, is busy flying from events to set – which could be annoying for some couples, but Booker said that “It has made for great adventures of, you know, making seven hours together be magical.” Aww, that’s kind of how I feel when I spent a hungover Sunday marathoning The Great British Bake-Off.

While it is kind of weird for a girlfriend of a Presidential candidate to be getting so much attention, interest in their relationship is high because he is the only unmarried candidate in the race. Basically imagine how you feel when you go home single for Thanksgiving or a high school reunion, but times a million. On top of that, they’re the only couple in the Presidential spotlight where almost every person has an interest in each of them individually because I don’t think Elizabeth Warren’s husband was ever in RENT. (Imagine if she was married to Mark, though?).

They’re starting to get more public with their relationship, with her appearing at a debate for the first time this past month. I guess cause she had to sit through that, it was only fair she made him sit through a movie called “Zombieland: Double Tap” a few days later. While some people are murmuring that these two are mainly upping the appearances now because of his falling poll numbers, Dawson is chalking up to the fact that she just has more time and is excited to ride around Iowa in an RV with him next month. You know you’re definitely in love if you think riding around in an RV for a month is an activity and not a punishment.

But, this could actually be something fun for her in her mind because she is definitely no stranger to the world of politics — she was a vocal Bernie supporter in the 2016 election and was arrested during the “Democracy Springs” protest that tried to reform voting laws and remove money from politics. Anyone else kind of want to see a video of her singing “Without You” to Bernie, though?

Biggest LOL? When Rosario Dawson introduced Cory Booker to her mom, a fellow Bernie supporter, she apparently said she didn’t get his vote — a tune she has now changed, most likely because no one wants an awkward Christmas dinner. It also is clearly a no-brainer that Rosario is the chill, cooler one in the relationship: case-and-point, he barely knew how to ask for her number before they started to date.

One of my favorite quotes from the article in the Washington Post is definitely: The couple knew that Booker’s schedule would become insane once he declared on Feb. 1 and that Dawson’s would become immovable once she started “Briarpatch.” I already don’t know what “Briarpatch” is about BUT JUSTICE FOR BRIARPATCH TO BE AS IMPORTANT AS THE 2020 ELECTION (I’m kidding ).

The profile also reveals that Booker read all 250 pages of the World War II novel “City of Thieves” to Dawson over the phone. While I think Booker and Dawson are both gorgeous, and I’d love to eat tempeh with them any day of the week, I’m so confused why he reads to her over the phone. Rosario, you can tell me if you just mute your end of the call and watch Succession on HBO Go. I won’t tell.

Rosario also pointed out the double standard in coverage of their relationship, noting that while plenty of people ask Dawson what it’s like to date a politician, fewer acknowledge Booker’s role as a stage spouse, too.

“Both of us are feminists, and both of us find it a double standard that they don’t ask me the same questions that they ask her,” Booker told the Washington Post. “You know, I have an incredibly successful, self-made woman as my girlfriend who is managing a business, nonprofit work, a career. And when she has her big moments, nobody says, ‘Hey, where’s your boyfriend?’ ”

Overall, Dawson seems excited to get more involved with his campaign, but because of her general interest in politics and to spend more time with her boyfriend, with whom she gushes she’s “absolutely in love.” As someone who have gone to multiple indie Improv shows to support people I was dating, I understand the RV thing completely. This is to say that she’s not doing it because the tabloids have been less than favorable to her being absent or neglectful: “I’m like, ‘I call B.S. on this.’ I don’t need to be on his arm to be supportive of him and vice versa.” You go Rosario, you go.

Looking for a way to stay informed while laughing (instead of crying) about the news? Subscribe to the Sup newsletter, a daily rundown and analysis all the news you need, and none you don’t.