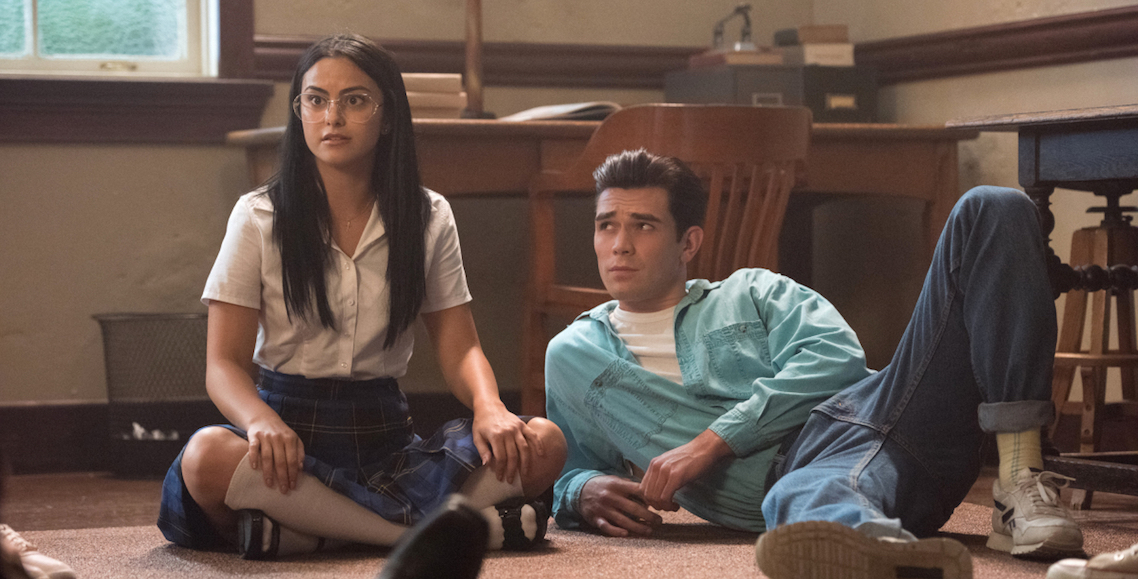 ‘Riverdale’ Recap: The Breakfast Club Wants Their Plot Lines Back

It’s Wednesday, which means I’m back on my bullsh*t, but luckily so are the writers of Riverdale. That’s right, people, after a brief hiatus Riverdale is BACK and still ripping off content from classic movies. Last episode it was The Shawshank Redemption and this week it looks like it’s going to be The Breakfast Club. What a treat we are in for, people! On that note, shall we just dive right in?

If you’ll recall, when last we left off, FP and Alice burned the “only copy” of G&G left on this earth. Lol. I believe that about as much as I believe that Betty isn’t into light choking. Of course, literally the next day every kid in school has a copy.

Cut to Betty, who is pissed that no one will tell her wtf is going on with this G&G game. Like, why is this girl always trying to get in the middle of a murder investigation? Seriously, she can only use “solved my classmate’s murder” so many times on her college apps.

I’m sorry, but did that coroner just honest to god dial Betty’s extension at THE HIGH SCHOOL to give her classified details about confidential case files? Did he?! Does anyone in this godforsaken town realize that she’s not actually a journalist, just a very nosy high school junior? Her investigative credentials are about as legit as mine are after watching 12 hours of Law & Order: SVU. Child please.

Betty finds out that someone died in a very G&G kind of way back when her mom was in high school so she confronts her about it. Betty’s like “If you don’t tell me what’s going on I’m just going to keep digging!” Lol. I love that when she threatens her mother it’s over covering up murders, but when I do it it’s over tagging me in posts on Facebook. To each their own, I guess.

Cut to Riverdale circa 1990-something where crazily enough, all the parents look exactly like their children! The genetics in this town are insane. And it’s definitely not at all suspicious that the parents who don’t have a child to be their double are conveniently left out of this flashback story. Not at all.

OKAY WHAT. Did they just confirm the the prom baby is FP’s?? Just like that? Are you f*cking kidding me? I hate that they just keep dropping these bombs on us without any  cinematic evidence of it happening. I’ve only been aggressively asking to see FP shirtless for three seasons now, but it’s chill.

Young FP, Fred Andrews, Mayor McCoy, Penelope, Hermione, and Alice all end up in detention together, where I’m sure they’ll have to write a letter about who they think they are but end up finding themselves in the process.

ALICE: We were six strangers who were forced to spend a Saturday together. But what we didn’t know is that our lives would be changed forever.

I love how forward thinking and innovative these show writers are. Seriously, what a unique plot line!!

Lol Alice describing FP as a “stud muffin” to her daughter. She’s like “ he was different back then, ya know?” Oh, I think she knows, Alice. The girl likes to put on a black wig and boil her potential suitors in a hot tub. She’s picking up what you’re putting down.

Annnddd we’re flashing back again. They parents are playing some sort of “sins & secrets” game where they’re being wayyyy too honest about their lives to complete strangers. Like, the only way I’d be this honest with a stranger is after a bottle and a half of wine.

It’s becoming clear that the parents are just as f*cked up and ridiculous as their children. The apple doesn’t fall far, I guess. Here’s what we learn from this game of Sins & Secrets:

Okay, WHAT. Penelope’s secret is literally batsh*t. I didn’t catch this at first, but apparently she’s always been a Blossom and not just by marriage.

PENELOPE: And then the Blossoms rounded up all the redheads in the orphanage and brought me home to be Clifford’s sister and also his future wife.

Hermione’s like “that’s disgusting, that’s basically incest!” and it’s like, girl, do not even get me started. Adoptive siblings banging each other is the least incest-y thing I’ve seen on this show to date.

So the kids find a G&G manual. I was wondering when Alice was going to stop talking about all the sex her and FP had back in the day and actually get to the point of this episode. I was worried they were going to blatantly plagiarize The Breakfast Club for no reason.

Alice keeps talking about how dangerous and addictive this game can be but it just looks really, really nerdy. I don’t understand how posing as witches and elves and princesses and knights leads to murder/suicide. It feels like a stretch, even by CW standards.

Penelope decides to bring the game to live action and is this the part when everyone starts drinking poison? WHERE. IS. THE. DANGER. She splits the group up into pairs: FP and Hermione, and Alice and Fred.

YOUNG MAYOR MCCOY: Why would you do that?

PENELOPE: I’m in the mood for chaos.

Yasssss queen. I’m loving that Penelope likes to ruin lives as much as her daughter does.

Okay, did Alice hook up with literally everyone in Riverdale? Young PREGNANT Alice starts making out with young Fred and Betty’s like “mom seriously?” Yes, ALICE, seriously??

Side note: I love that she can’t stop talking about the glory days. Like half this episode is Alice talking about all the sex she used to have.

Okay, young FP/Jughead/Cole Sprouse looks fiiiiiine in this episode. He’s running around with the gang with a plastic sword and wearing a fake fur vest and honey I am here for it.

Apparently they aren’t the only out of control teens dressing up in cosplay and larping on the weekend–the rest of the popular kids are too! Seriously, CW? This is a hard pill to swallow. Like, harder than levitating babies and Riverdale’s understanding of the justice system. I do not for one f*cking second believe that high school jocks would willingly dress up in medieval garb unless a gun was pointed at their head. Please.

They team up to form a super nerd group and throw an ascension party to celebrate being deep AF into their nerdom. Jesus this episode took such a weird turn. Young Hiram shows up to the party and offers everyone illegal drugs. Typical Hiram. Glad to see he never changes.

Alice is like “and this is the part where everyone went insane” but it’s literally just a bunch of high schoolers playing musical instruments after curfew. Again, when does all the murder start happening??

Since Alice is pregnant she doesn’t take the drugs, but she does keep wearing those crop tops. A bold choice. She goes to throw up while everyone is getting lit and sees some v disturbing writing on the wall telling her to play flip cup with some chalices. I paraphrase. My favorite is that she legit thinks about it. WHILE SHE’S PREGNANT. Alice, you are wild girlfriend.

Alice is like “I’m too pregnant for this sh*t” and Irish exits right as the principal is rolling up on the scene. The next morning she goes looking for all her friends to see if the principal busted their asses.

Okay, weird. Hermione says she never ran into the principal but Fred’s dad died that night. It’s not really where I saw this episode going, but okay.

OH SH*T. They find the principal weeks later and he’s dead under the steps with blue lips. Same as Dilton Doily. I find the principal’s death less shocking than the fact that Alice is STILL fitting into those crops tops. Seriously, how far along is she? She has to be at least a few months, no? My weight fluctuates more between a Friday at 5PM and a Friday at 2AM, but okay.

I guess the group falls apart after the whole murdered principal thing because they all go their separate ways. Fred sells his guitar and all his dreams of becoming the next town troubadour. Hermione gets with Hiram and starts wearing a lot of black silk. Mayor McCoy and Sheriff Keller break up. FP learns to love beer. Alice is still wearing crops tops but, like, preppy ones now. And Penelope decides to sleep with her brother. Yeah, I’m pretty sure G&G didn’t f*ck you up, kids. Your own life choices did…

Cut to the present and Betty is like “I have questions tho.” One of those questions better be about what FP was like in the bedroom, Betty….

Okay, so now Betty wants to investigate Principal Featherhead’s death and Dilton and Benjamin Button’s suicides. Does this b*tch not have homework to do or something??

ALICE: Please promise me you won’t investigate this.

SHE IS NOT A REAL DETECTIVE, ALICE. My god. Ground her ass! You have all the power here, woman.

Betty goes off to find Jughead and tell him about their parents’  Midnight Club. She finds him in Dilton’s bunker playing G&G with some people and looking INSANE. Like, is he playing a nerdy board game or did he just snort a line of coke? ‘Cause I’m not buying that that behavior is from a game.

And on that note, I’m outtie, Betches! I guess we’ll have to wait until next week to see if Jughead is forming a new drug problem or if he’s just getting into cosplay. Only time will tell!