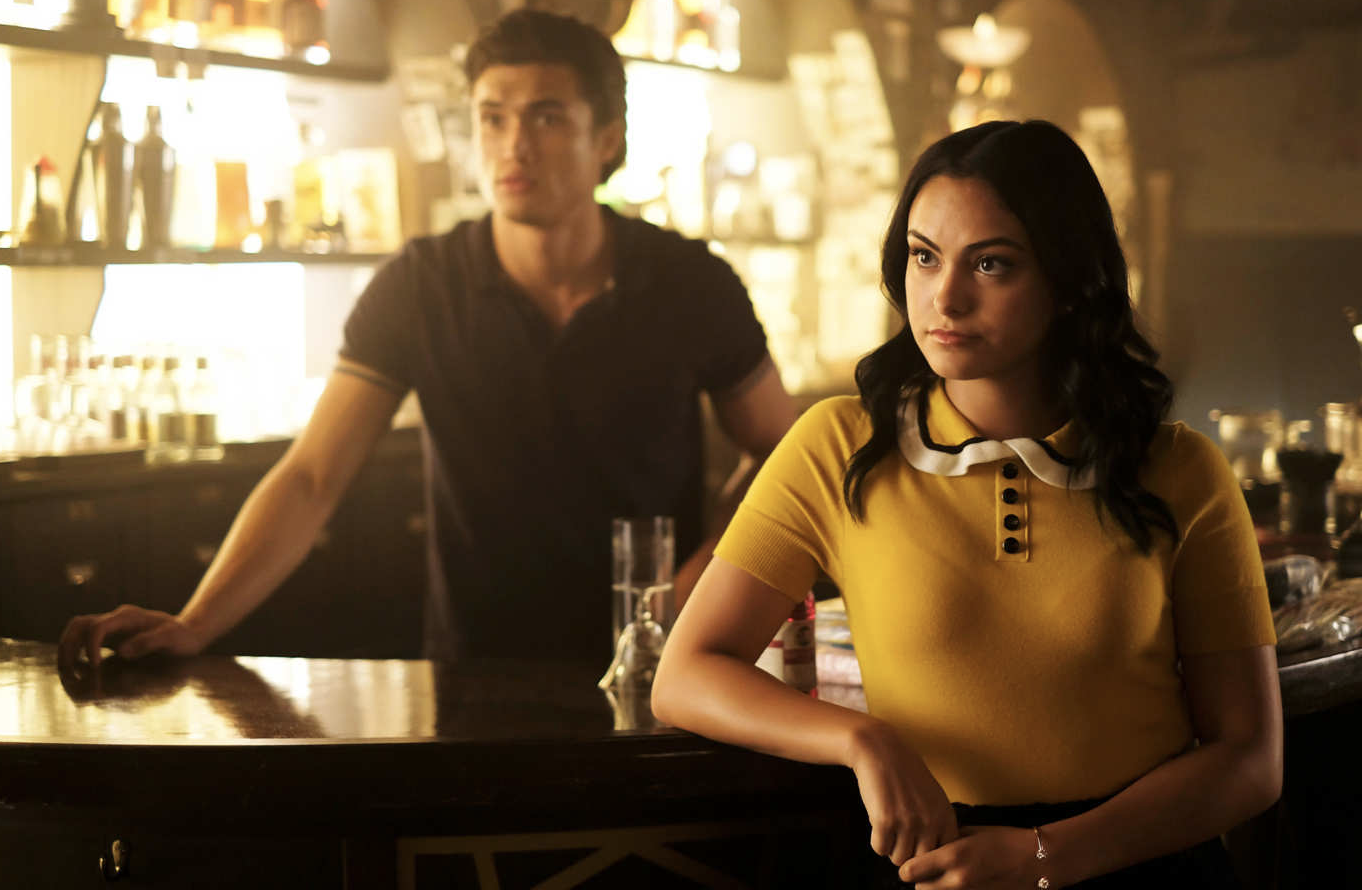 ‘Riverdale’ Recap: How Many Cults Can One Town Have?

This week I’m just going to jump right into the Riverdale recap, because there’s only so many jokes I can make about the writers of this godforsaken show (but let’s just say they continue to test my f*cking sanity with every new plot device they introduce). Shall we begin?

The episode opens with the warden checking in on Archie, who is apparently in the hole. For those of you who aren’t familiar with prison jargon, that means he’s in solitary confinement, which I didn’t realize juvenile detention centers even had. They keep making Archie out to be some kind of Andy Dufresne, even though he literally asked to be in prison.

I guess Archie refused to be the warden’s new cage fighter and that’s how he ended up in the cell with no food, water, or sunlight. Like, this can’t be f*cking legal. This is a JUVENILE DETENTION CENTER, not a maximum security prison! Archie is a straight, white, relatively attractive male. If anyone should be eluding the justice system, it’s him! I’m not buying it, CW. Nope.

WHAT. FP AND ALICE ARE IN BED TOGETHER AND WHAT AM I LOOKING AT OMG. Goddamnit, CW, is this real or nah? And if this is real how DARE you deny us the lead up to this post-sex lounging taking place on our screens. You’re just gonna tease these two banging for TWO SEASONS and you’re not even gonna to let us watch it happen? THAT’S IT, you have my full attention.

Elsewhere, their children also just got done having sex! What a coincidence that isn’t all tainted by incest now.

BETTY: Do you think it’s kind of ghoulish that we banged in Dilton’s bunker?
ALSO BETTY:

Lol. Betty please stop acting like screwing in your dead friend’s bed doesn’t turn you on. Come on.

They think this whole Gryphons and Gargoyles thing is some sort of cult and it’s the smartest thing they’ve said all season. I’m not sure what gave it away. The unhinged following, the strange altar they worship at, or the all the murder/suicide to even get into the club. I guess that’s just good detective work, kids!

Betty goes so far as to say that perhaps the farm is also part of the cult. Again, any “farm” that takes in a runaway teen mom and her infant children who were conceived out of incest with open arms is most definitely a cult.

Betty’s like, “I don’t trust the Evernevers” and it’s like, well I don’t trust that people would willingly subscribe to a cult headed by a man named Evernever. It looks like we all have a lot of trust issues here.

Meanwhile, Veronica contemplates opening her secret speakeasy without Archie. A. Secret. Speakeasy. You and every hipster in the greater NYC area, V! Tbh I don’t know what’s more unbelievable here. That a 17-year-old is opening up her own night club or that she wants to wait until her boyfriend gets out of prison to do it.

Okay, wait. Did I just hear Veronica right? It’s a speakeasy that will only sell mocktails?

That is the most offensive thing I’ve ever heard on this show, and they’ve tried to make incest an acceptable thing, like, multiple times.

Speaking of Veronica’s bf, Archie gets dragged out of his cell in the middle of the night to go watch one of the cage fights. The warden has Joaquin fighting in Archie’s place, and IDK why this is eating Archie up so much. Joaquin literally wanted him to SHIV someone, like, two episodes ago. Prison changed him. He can def handle himself in a cage fight. Archie’s like “don’t make me watch anymore, I’ll fight for you!” Further proving that Archie will literally fall for every trick in the book.

ARCHIE: *breathes*
ME: YOU’RE A BOOB

Someone plants Jingle Jangle in Veronica’s speakeasy and she is PISSED. She wants her bar to be completely dry and why is everyone hell-bent on ruining her good time?? Of course this happens right as the sheriff shows up to do an inspection. Reggie’s like, “do you think your dad is behind this” and it’s like NO SH*T he’s behind it, buddy. I already don’t like how much time they’re spending together. I have a feeling Reggie is about to be the Asian replacement Archie while the real one is doing time.

She goes looking for Jughead to see if he’ll help her blackmail her dad so she doesn’t have to pay off his hired thugs, but finds Cheryl instead. Cheryl literally set her childhood home on fire out of spite, so I feel like blackmail is child’s play to her.

Okay WHAT. These girls throw on their best black spanx and f*cking break into The Ghoulies’ meth lab. Excuse me, Jingle Jangle lab. They make it seem like breaking into a drug den is easier than sneaking out after curfew. Just because you own a black cat suit and know how to use a back door does not mean you’re super stealthy! It just means you’re lucky AF.

Lol. Betty comes home and finds a bunch a farmies in her living room. She has to confess all her sins if she wants to meet Edgar Neverever. They’re like “it’s cool, Betty, we know all about the dark connection you have with your serial killer father and also the web cams!”

Okay, I seriously can’t believe Alice aired all their dirty laundry out like that! She told them about every illegal thing that family has ever done and, like, that list is long. Also, can you imagine what this cult probably thinks of them?

THE FARM: We’re going to need some sort of collateral from you if you want to join our cult family. You know, something secret or seriously damaging?
ALICE: Well we murdered someone accidentally and got rid of the body… does that count?
THE FARM:

Yeah, I’m pretty sure that was an overshare, Alice. I’m thinking they wanted something more like nudes, but okay.

Okay, this G&G game is sooooo creepy. Jughead shows up to Ethel’s lair and she’s got candles burning, she’s wearing a headdress and demanding kisses from the players. Something tells me that last one was a rule she made up, but OKAY ETHEL.

She’s like “if you want to play the game then you need to drink out of one of these two chalices and one of them might be poisoned. Good luck!” AND JUGHEAD DOES IT. So, let me get this straight, kids. You frown upon underage drinking but playing Russian Roulette with your lives is chill?? Jughead drinks from the right cup and doesn’t die. Small mercies. But then Ethel starts downing the other one even though she knows it’s poison! That b*tch is crazy.

Cut to Veronica’s opening night and I’m impressed. It looks poppin’ AND there’s even a valet, which feels extra because I can’t imagine Pop’s parking lot is that big, but okay.

Okay, every time I think this bar looks really cool and all I remember that everyone there is sober. Hiram shows up and the vibe gets even creepier. There’s just a bunch of sober, scantily-clad 17-year-olds… and Hiram. Gross.

Veronica’s like “see, daddy? This is how you run a legitimate business.” Yes, Veronica, I’m sure your daddy is very impressed that you found enough friends to come to your open mic night. Like, all you’ve proven here is that you’re popular. Very popular.

Okay, so is Josie the only talent for the entire evening? Minus the weird shadow dancers in the background? Sooo it’s, like, a school dance? Except no one’s even allowed to spike the punch? Seriously, HOW is Veronica making any money off this?

While Veronica parties it up, Archie is getting the sh*t kicked out of him in prison. I’m sure he’ll write a song about this moment later. He wins the fight and the warden gives him a bottle of rum for his troubles, which is v thoughtful of him. If there’s anything I know about high school juniors it’s how much they love their alcohol to taste like suntan lotion.

Archie starts trashing the sh*t out of his room and finds Mad Dog’s old bible? Nudie mag? It’s unclear. But he finds a cut-out for a rock hammer in it, which is a plot device straight out of The Shawshank Redemption. So, what? Now he’s going to escape prison with nothing but a rock hammer? WHERE HAVE I SEEN THAT BEFORE.

^^A sneak peek of Archie in next week’s episode!

Jughead and Betty get back from the dance and walk in on FP and Alice acting sketchy as hell. Betty’s like “mom what are you doing here?” and Alice is like “certainly not boning your boyfriend’s dad! What are YOU doing here?” Lol nice cover, Alice.

They found the G&G manual during their investigation and they’re pissed. FP and Alice burn the only copy of the manual and if I know anything about Riverdale, it’s that there’s no way in hell that’s the only copy. Don’t look so upset, Jughead! There’s a murder committed in your town every other day—I’m sure there will be something to investigate tomorrow!

Cut to the next day, and sure enough, the G&G manual is everywhere. Every kid in school found one in their locker and Jughead looks genuinely terrified. He’s acting like it’s Tom Riddle’s diary and not some underground version of D&D.

Ooooh so Ethel is behind the G&G distribution. I thought she was on suicide watch, though? How did she get out of the hospital unnoticed? Maybe she borrowed a catsuit from Veronica and used the back door??

Next week it looks like the Riverdale writers are using The Breakfast Club as inspiration for a flashback episode featuring all the parents in their high school heyday. And by “inspiration” I mean probably using word for word dialogue from the movie. Can’t wait!