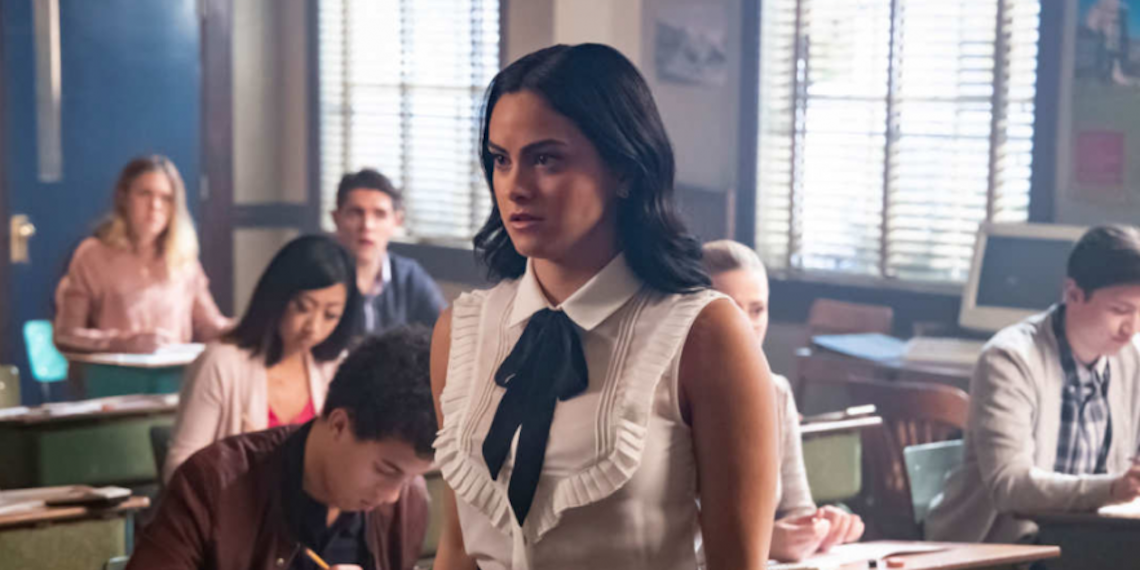 Welcome back once again, people, to another wild Wednesday night in Riverdale. Last week left us with a lot of questions, mostly what are the writers of Riverdale smoking, and where can I get some? There’s also the question of who would willingly rent out their cabin in the woods to a 17-year-old whose background check reads “high school dropout” and “recently incarcerated.” If I thought any of those questions could actually be answered without opening another plot hole the size of Archie’s vacation cabin I would have stopped DMing the writers on Instagram. But, alas, here we are. So, on that note, let’s just dive right in.

If you’ll recall, when last we left off Archie had been mauled by a bear. Lol. After the attack he slipped into some sort of demented fever dream where he realized that he is in fact the worst, and then tried to subconsciously beat himself to death. Again, @writerras WHAT ARE YOU SMOKING??

Moving on. The episode opens with another judgey voiceover from Jughead. He’s making passive-aggressive comments about Archie’s new hair color, and this is a level of petty I aspire to. Like, your friend just barely survived being mauled to death by a wild animal and you’re dragging him for trying to see if brunettes have more fun.

JUGHEAD: He was now a stranger. He had dark hair.

You’re a messy bitch, Jughead, but I love it!

Okay, also, can we take a minute to talk about said grizzly attack? Like, the last we saw of Archie he was in the middle of nowhere, bleeding to death, and now he’s walking into Riverdale like nothing happened? I mean, he had to go to the hospital for those injuries, right? How in the hell was social services not called? He’s a minor! And did he barter his new L.L. Bean vest to pay the medical bills? These are the questions that keep me up at night.

Archie goes to Veronica’s bar to let her know that he’s back in town and I sincerely hope she beats him to death with one of her mocktails. Don’t get me wrong, I love any scene that involves a man groveling, but Veronica is way too good for this dipsh*t.

VERONICA: What the hell happened to your hair?

Okay WHAT. Are they going to bang? Right there on the bar? What happened to Reggie? Aren’t they together? Veronica’s all, “Where were you? Why didn’t you call me?” and when Archie gives her a vague shrug as his answer, she immediately suggests doggy style behind the bar. Come on, V! I expected more from you.

Guys, Archie has changed soooo much since his time in Canada. Not only is he brunette, but he doesn’t even have the same drink order any more! Okay, stop it. I’m worried now.

BETTY: Why didn’t you order a strawberry milkshake?
ARCHIE: I like root beer floats now.
HIS FRIENDS:

Lol I love how Betty is all of a sudden acting like these kids go to school. She’s all, “Guys the SATs are this weekend, who all wants to study?” But when will you have time to study, Betty, what with all the murders you have to solve and adults you need to shake down? Hmm?

Betty’s card gets denied at Pop’s and it’s the most relatable thing I’ve ever seen on this show. The card getting denied part, not a teenager learning how to build credit. Please. She finds out that Alice is the one behind it. Not only has her mom maxed out all of her credit cards, but she’s also drained all of her savings and college funds and given it to The Farm. Because that doesn’t all feel like a culty thing to do.

Okay, STOP. The principal also suddenly cares about academics?? Why is this show suddenly being logical? Are the writers finally reading my recaps? WHAT ARE THEY PLAYING AT.

I don’t trust any of this.

HAHA. The principal wants Archie to repeat his junior year and Archie looks shook. Like, dude, you spent the first half of the school year in prison and the second half  in seclusion in Canada. You can’t really be surprised that he can’t just pass you to the next grade because you look good with your shirt off. Come on.

Ah, so Veronica is still dating Reggie. Reggie tries to kiss her by her locker and she’s like “um excuse me but the guy who dumped me over a payphone and hasn’t responded to any of my texts in weeks is actually back and interested in me for five minutes so we’re done, k?” That’s it, Veronica, dump a guy who’s actually interested in you for one who thought the SATs was a new music festival. God. Veronica is me. I am Veronica.

Meanwhile, Archie is starting to realize his limitations. And by limitations I mean that he has the vocabulary of a boulder.

JUGHEAD: Let’s start with an easy one. What does “iconoclast” mean?
ARCHIE:

Lol. Yeah, this kid is going far. But not even as far as management at McDonald’s.

Okay, Veronica is bold. She gets all their friends INCLUDING REGGIE to gather for a study/welcome home party for Archie. She’s like “sit down lover and let me serenade you” and I just vomited in my mouth a little. Honestly, Reggie looks about as homicidal as I feel right now. Someone please make the random acts of singing stop.

Archie starts having flashbacks to his vision quest and flees the party. Veronica’s like, “he’s changed! He doesn’t even like my singing anymore!” And it’s like, did he ever, though? Or did he just like to get laid? I’ll let you decide, V!

Cut to the next day, and Reggie is going in on Archie for dipping out on Veronica’s public serenading. He’s like, “why are you such a little bitch” and it’s, like, damn I guess Archie has the right to remain burned. That was a good one.

HAHA. Archie turns around and shows off his scars from the attack and I just snorted out loud. He supposedly got mauled within an inch of his life and it just looks like a cat scratched him. Is this a joke? Are those actually supposed to be claw marks from a bear? There’s barely anything there! Reggie, DO NOT be intimidated by this!

Meanwhile, Betty does what I do every time my mother asks me if I really need all those iced coffees and to “learn to save”: asks daddy for money. She’s like “mom can’t be trusted” as she speaks to a man with IRON BARS separating him from society. K.

It turns out Hal was the OG Gargoyle King who poisoned Principal Weatherby back in the day. He’s like “they were all a bunch of sinners” and I can’t argue with that. Alice wearing crop tops during her first trimester! Finding out that Penelope actually marries her adopted brother! I’m not comfortable with how much time I’ve spent talking about that flashback episode with my therapist.

BETTY: I solved your murders, didn’t I?
HAL: And I would have gotten away with it to if it weren’t for my meddling kid!

Okay, I totally forgot that Fangs was going undercover in the Gargoyle Gang. He tries to infiltrate what appears to be a Klan meeting, but with Halloween masks. This is so unsettling.

It’s revealed that Tall Boy is in fact the tree monster/pretend Gargoyle King who has been terrorizing people all over Riverdale. But, like, why though? This feels completely random and not at all like the writers played 52 pickup with the cast’s headshots to see who would be the villain this season.

Meanwhile, Archie finds out that Reggie and Veronica hooked up while he was gone and he’s piiiissed. I’m not sure why though? Like, Archie, did you or did you not get a lap dance from some rando farm girl three minutes after dumping Veronica over a payphone? Yeah. Cry me a river, Red.

Betty confronts Penelope Blossom about visiting her dad in prison. I’m not surprised at all that Penelope likes to hang out in penitentiaries. That feels very on brand for her character.

BETTY: Are you one of those sickos who fantasizes over serial killers?
PENELOPE: As a girl I did write love letters to Jeffery Dahmer. So, yes.
BETTY:

Oh shut tf up, Betty. As if you’re not one of those sickos who gets wet from murders. You forget we’ve all seen your wig, honey!

I’m sorry, but did Archie just ask for one last bang? He’s like “I get it, I’m not very bright and I kind of suck, but can we have breakup sex please?” AND VERONICA DOES IT. Mija! Where is your self worth! You’re better than this, girlfriend.

Fast forward to the next day, and it’s SAT time. I’m shocked the writers are actually going to follow through with this plotline. I guess Veronica and Archie test prep a little bit differently than me.

It’s not looking good for Archie. Jesus. He’s struggling to even bubble in his name. His combined score on the practice test was 600 so I’m not confident he even did it right on the practice run. He runs out of the room and immediately has a panic attack.

Wait. Holy sh*t. Is Hiram dead?? Did someone just shoot him? Was it Archie? He was all riled up after a long day of number two pencils and standardized test taking…

VERONICA: He got shot sometime after you fled the SATs…
ARCHIE: Lol r u serious?

The boy has a point, V! In all honesty, I don’t think it was Archie. This is the boy whose grand plan to escape prison involved rushing the gates in broad daylight. Premeditated murder feels a little outside his skillset.

Meanwhile, Jughead shows up to the bunker to find that Sweet Pea and Fangs have shot Tall Boy. They’re freaking out but, like, this isn’t the first time Jughead’s gotten rid of a body before. Body disposal is kind of his foreplay.

WHAT. FP IS THE SHERIFF. WHAT. First of all, I’ve never been so wet in my life. My god, that uniform is everything. Second of all, I’m not even going to question the plot hole that is a convicted felon taking over a vacant sheriff position. As if there wouldn’t be riots in the streets over this. I don’t even care! As long as he wears that uniform from now until forever I’ll take it.

And on that note, I’m out! If you need me I’ll just be googling “Skeet Ulrich smoke show” from now until next Wednesday. BYE.