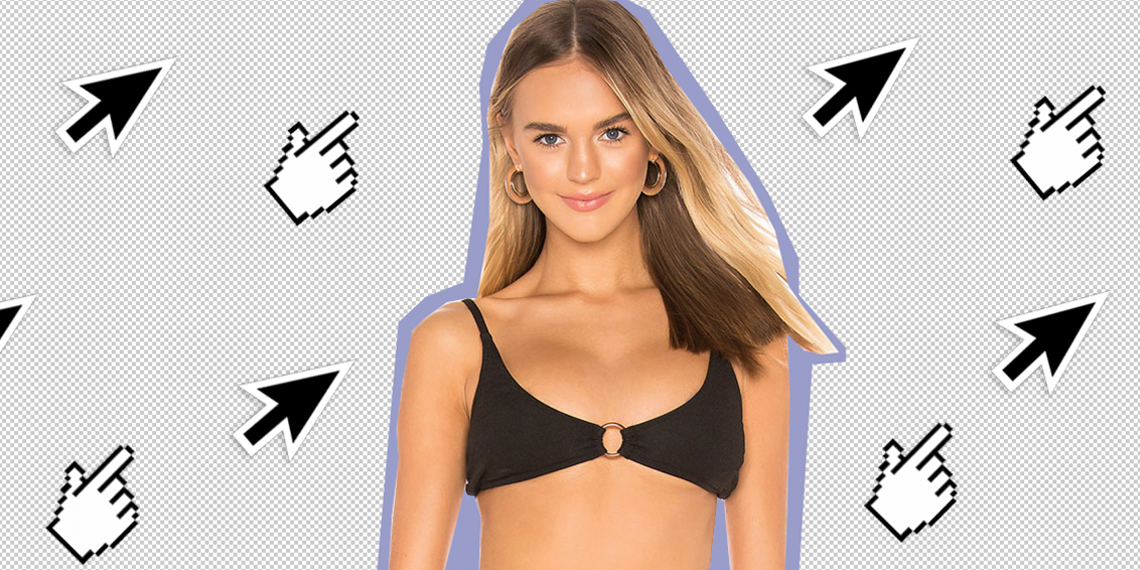 For today’s Photoshop Fail, I was sent this horrible, horrible photo from Revolve. Look, I love to shop online. I love avoiding the store—no lines, no wearing pants, and no carrying heavy bags. The only true flaw of online shopping is when OnTrac holds your packages hostage but says it’ll be delivered “tomorrow” and then does this for 10 days. Okay, there are two flaws. The second is that it’s impossible to know what looks good on you without trying it on. It doesn’t help when websites use superhumanly thin models that are also 10 feet tall as a gauge of what it looks like. Some brands are on it, and show clothing on a variety of body types and do minimal editing. But most tend to do what I’m about to show you. This is one of those things that gives women unrealistic expectations for their bodies. They will hire extremely thin models and then edit them to make them even thinner. Like, what? The thinnest women in the world are not thin enough for you still? Here is the offending photo that is the subject of today’s Photoshop fail:

There are so many fails with this, it’s hilarious and also very sad for women on a whole. As if we’re not dealing with enough right now. The first thing is that she is airbrushed absolutely everywhere—which is pretty typical and IMO totally pointless. Even worse and terribly common, is that her body has been cut down EVERYWHERE. You can tell because she has soft, blurry edges. If you look at a real photo of a person, you have hard edges, because your arm or whatever does not blur into the background. Since this is a pure white background, it’s normal to “cut out” the model to get rid of what was behind her, but they went into her body too far to make her look thinner. Also? NEVER use a soft, airbrush eraser on hard edges. Here it is close up of what I mean:

You can especially see the sloppy erasing where her wrist connects, but the soft edges are pretty much everywhere. Then they went and shaved down her rib cage too, because women aren’t allowed to have ribs in today’s society. It actually looks like they made the stomach lines too soft so they went back and drew in a VERY crude outline in an attempt to fix it:

It’s like some asshole took the brush tool and just drew back a hard edge on her stomach? It looks like he traced her with a marker? SO, so sloppy. But hey, if even the super thin model needs to be erased out and then drawn back in to fit into today’s standards, that just shows that you should NEVER feel bad that something doesn’t look the same on the model as it does on you.

To compare what an unedited person looks like, Modcloth doesn’t do excessive editing to their models. I say “excessive” because I’m sure they fix lighting, color, and maybe get rid of a pimple or two here and there. But just look at the difference:

Four for you, Modcloth, you go, Modcloth. This model has hard edges everywhere, none of which look like they were drawn back in with a Sharpie. This is most likely the model’s true body and how the swimsuit looks on a real person. This is what everyone should do—just dress your models in flattering cuts! If they wanted to cut out the background, they could start cutting outside of her body lines, not shaving parts of it away with a soft brush the way Revolve has.

These issues are the least of this poor model’s problems though. This very thin woman does not seem to have large breasts. Apparently that’s not okay with Revolve, because they decided to do this to her:

I actually laughed out loud when I saw this. Can you see the problem? In an attempt to give her breasts when she clearly does not have large ones, they used the Burn tool to shade in huge lumps on top of her chest. This is so poorly done, because the only way to get top of boob lines is if you’re pushing up your breasts or have implants. In either case, you would have cleavage. Which she doesn’t. So they’ve only truly succeeded in giving her some scary, half-assed pecs. Which, again, would still have some kind of central line cleavage. It looks so much worse than—gasp—a woman with small breasts.

However, we’re not even done. Let me introduce the TRUE STAR of today’s Photoshop fail.

Quick question: Does that look natural to you? That just isn’t how your thighs/butt work. It doesn’t connect with a line through part of it like these are separate pieces sewn together. This is the part that jumped out to me immediately that something was off here. Also? How saggy would her butt need to be for you to see it through her thighs and hanging down the back? It makes zero anatomical sense.

It looks like she didn’t have a thigh gap, so they put one in. In an attempt to make it look less like they cut a rectangle out of her vagina (looking at you, Target), they cut down her thighs but left that weird top portion. That is her true thigh width. Then they cut in some white lines on either side to make it look like a separate piece. It doesn’t make any sense though, because if this was truly her butt cheek, it wouldn’t be highlighted, it would have shadows. They literally put white divider lines around it so it didn’t look attached to her thigh. Also? Your butt is attached to your thigh, you just wouldn’t see it at this angle, unless you have an extremely saggy butt. The result looks more like she has some weird inner thigh tumor. Apparently tumors are now better than having your thighs touch in today’s fashion. Who knew?

Hopefully this opens your eyes to how full of sh*t our models and advertising are. Don’t compare yourself to these images, they are generally all lies. It’s okay that you don’t have an inner thigh tumor in your photos. It’s okay to be flat-chested and not have superhero top pecs. You do you.