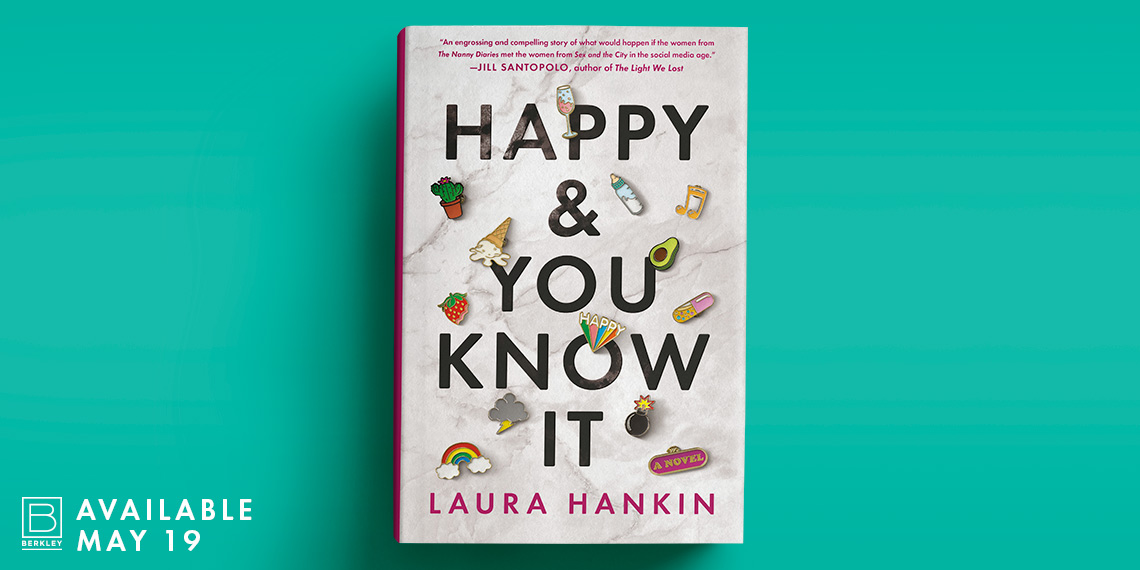 Read The First Chapter Of ‘Happy & You Know It’, The Novel That’s ‘Mean Girls’ Meets ‘The Nanny Diaries’

Have you ever said a hilarious joke that got no laughs, only to have your friend repeat it a little louder and get all the credit? I imagine that’s kind of a small version of the feeling Claire Martin has when she gets kicked out of her band right before they get super famous for a song she wrote. Laura Hankin, famous for her “Feminarchy” comedy videos, debuts her first novel, Happy and You Know It, about the treacherous places Claire must go before she withers away in self-pity: straight into the middle of a group of young Manhattan moms, as the playgroup musician for their kids. You know, the ones who make it to hot yoga like, the day after they give birth. It’s basically like The Assistants but with rich moms, or like Mean Girls mixed with The Nanny Diaries.

If you’re looking for a hilarious read, but can’t get through a book without a little suspense, Happy and You Know It is the book for you. Claire enters a world of dark secrets, and discovers that these moms have much bigger problems to worry about than which Lululemon leggings to wear that day. Hankin, who did this job in real life, tells us what it’s actually like to be a mom in this Instagram-perfect world.

Happy and You Know It made Newsweek’s “Must-Read Fiction and Nonfiction Books to Savor This Spring” and, after reading this first look, I can already see why. The book comes out in May, and you can preorder now, but if you can’t wait that long to start it, Betches was lucky enough to get an exclusive excerpt.

New Yorkers are good at turning a blind eye. They ignore the subway ranters, the men who walk with pythons twined around their shoulders, anyone who suggests meeting for dinner in Times Square.

But on one sweltering August afternoon, when the whole city was trapped in a bubble of heat, a woman came running down Madison Avenue in a full-length fur coat, demanding to be noticed. As she sprinted by, encased in a suffocating cocoon of mink, the sweaty customers at the sidewalk cafe on 94th Street couldn’t help but stare.

Maybe it was, in part, because of her smell — the staleness of the inky black pelt she wore, plus something else, something sickly-sweet and stomach-turning. Vomit. Dried bits of it crusted the woman’s mouth. Little chunks clung to her hair. She didn’t look like someone who should smell that way. She looked rich.

Maybe it was the sleek stroller she pushed in front of her. It glided along the sidewalk, the baby equivalent of a Porsche, but without a baby inside.

Or maybe it was the pack of women chasing her.

Afterwards, when the media was just starting to whip itself into a frenzy about the so-called ‘Poison Playgroup of Park Avenue,’ one witness would tell reporters that he had known the women were dangerous all along. He had sensed it from the moment he saw them—even before they tipped their heads back and started to scream.

Claire Martin didn’t want to throw herself in front of a bus, exactly. But if a bus happened to mow her down, knocking her instantly out of existence, that wouldn’t be the worst thing in the world.

If she were floating in eternal nothingness, at least she wouldn’t have to hear Vagabond’s music in every fucking bar in New York City. It happened for the fourth time not long after New Year’s Day, as she sat on a stool in some Upper West Side dive, performing her fun new ritual of Drinking To Forget. She’d managed to swallow her way within sight of that sweet, sweet tipping point — the one where all her sharp-edged self-loathing melted into something squishier and Jell-O-like — and had just caught the eye of a curly-haired guy nearby when “Idaho Eyes” came over the speakers, as jarring and rage-inducing as the clock radio blaring “I’ve Got You” in Groundhog Day.

She turned away from her new prospect, and leaned over the bar. “Hey,” she said to the bartender, who held up a finger in her direction, and continued his conversation with a middle-aged man a few stools down. Automatically, she drummed her fingers along with that catchy opening beat, before she caught herself and closed her hand into a fist. “Hey!”

“What?” the bartender asked, glaring.

She squinted at him, trying to make him come fully into focus. He was a big, scowling bear of a man, and alarmingly fuzzy around the edges. “Can we skip this song?”

Claire considered leaving, but the guy with curly hair intrigued her, and she liked Fucking To Forget almost as much as Drinking To Forget. She swallowed, then flashed the bartender what she hoped was a winning smile. “Please? I’d really appreciate it.”

Her smile had worked wonders for her in the past, bright and effective enough to be a form of currency. In the early days of touring with Vagabond, rattling around in a van for which they could barely afford the gas, the guys had joked about it, and had sent her into convenience stores to see if she could get them all free snacks for the road. But this bartender remained unmoved. He folded his hairy arms across his chest. “My bar, my playlist.”

She gritted her teeth, as the verse turned into the first chorus. A nearby couple began to dance, shout-singing along, the man looking into the woman’s face with pure love. In times like these, Claire thought that maybe God did exist, not as some benevolent being or terrifying father, but as the omniscient equivalent of a prank show host. An Ashton Kutcher kind of God. She took another large gulp of her whiskey. “Don’t be a dick, man,” she said, as the bartender turned away. “The customer’s always right, right?”

“I’m a customer, and I love this song,” said the middle aged man down at the end of the bar.

“Well, you shouldn’t,” she said, as a wave of nausea rose in her stomach. “They’re terrible.” She took a couple of shallow, panicky breaths as, over the speakers, Marcus and Marlena’s voices mingled in harmony. Dammit, they sounded good together. The middle aged man, apparently some kind of regular at this dive, made a wounded face, his shoulders slumping. The bartender noticed and pulled out his phone, holding it up right in front of Claire to show her the song playing on his Spotify. His finger hovered over the skip button. Then, he deliberately turned the volume up. The sound grew loud enough to suffocate her, to smother her. She lunged forward to grab the phone away from him.

As the bartender ejected her, none-too-gently, into the stinging January night, she realized that perhaps it was safer to drink alone in her apartment instead.

“How’s the wallowing going?” Thea asked, in her brisk way.

“I don’t know if it’s fair to call it wallowing,” Claire said. “That sounds so masturbatory. I think your band getting super-famous right after they kick you out is a great reason to become a shut-in.”

Over the past couple years, Claire had spent so much time on the road that all she’d wanted from her home was a place without roommates, where she could immediately take off her pants and collapse into bed. What did it matter that her “kitchen” only had room for a mini fridge and a hot plate? She wasn’t exactly whipping up five-course meals for herself. Who cared that the bars on her window blocked out most of the natural light, or that she’d stuck up all her posters with tape instead of framing them? But now, from underneath her sheets, Claire cast a look around her tiny studio, at the stacks of boxes from Pizza Paradise starting to grow mold, at the piles of discarded beer cans, at the torn-up remains of a note her parents had sent her, reading: You can always come home. Jesus forgives, and so do we. “The wallowing is getting pretty gross,” she said.

“Well then, get up. I got you a job.” Even as a child in their tiny Ohio town, Thea had been the one who got shit done. She’d organized all the bored neighborhood kids into teams for kickball. She’d harangued all the grown-ups until they signed up to bring something for the church bake sale. And then, when her parents had discovered she was gay and threatened to kick her out of the house unless she agreed to go to a conversion program, Thea had wasted no time in getting a full scholarship to Harvard, and leaving on her own terms.

“Singing ‘Old MacDonald’ to the future CEOs of America. Some woman named Whitney Morgan emailed the Harvard list looking for a playgroup musician, so I sang your praises.”

Claire bit her lip. “That’s really nice of you, Thea, but that’s the kind of stuff I was doing five years ago. I don’t know if I want—”

“How much money do you have left in your bank account?” Thea asked.

“Um,” Claire said. She swung herself out of bed too quickly and, a little dizzy, reached for her computer to pull up her account balance. When she saw what her self-destructive spiral had done to her savings, her mouth went dry. Her rent was already overdue because she’d run out of stamps, and hadn’t been able to muster the energy to go out and buy more. And once she sent in that check, her bank account would be down to double digits. She cleared her throat. “What’s the address?”

“I’m looking out for you, cuz,” Thea said, a note of tenderness creeping into her voice. “Can’t have you going back to Sacred Life Christian Fellowship. We’re the ones that got out.”

“And Claire? Before you go, please take a shower,” Thea said. “I can smell you over the phone.”

Excerpted from Happy and You Know It by Laura Hankin, published by Berkley, an imprint of Penguin Publishing Group, a division of Penguin Random House, LLC. Copyright © 2020