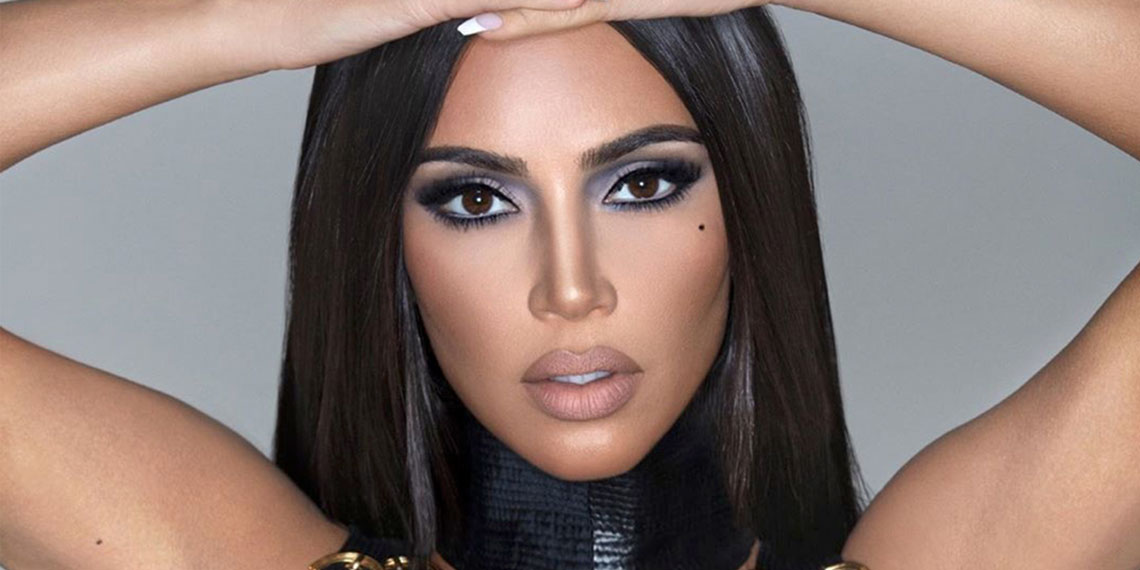 Photoshop Fail Of The Week: Kim Has Gone Full Cyborg

There have never been such Photoshop/photo editing/plastic surgery victims as the Kardashian/Jenner clan. They just cannot stop themselves. It’s way past a “Well, I’ve always hated my nose” level of surgery, and has crossed over into full-blown into scary alien territory. Their proportions IRL are crazy insane—even when they’re not wearing 20 corsets and Spanx sets. It’s all just a lot. However, Kim Kardashian somehow doesn’t think her artificially crafted body and genetically modified face are good enough yet. Because to announce her new makeup line, she did this:

I’m so excited to announce my new 90’s inspired collection of all matte formulas- The Matte Smoke & Matte Cocoa Collections!!! I get a lot of my makeup inspiration from the 90’s and love how nostalgic this entire collection is. The collection features 2 10-Pan Eyeshadow Palettes, 6 Lipsticks in a brand new matte formula, 6 Lip Liners, and 5 Eyeliners. Matte Smoke & Matte Cocoa are two entirely different color ranges, so there are so many looks you can create with this collection. I can’t wait for you guys to try it!!! Launching to kkwbeauty.com on Friday, 08.16 at 12pm pst #kkwbeauty

FIRST of all, it’s a crime in itself to start wearing the dark brown lipliner and pink lipstick combo. That was the worst of the 90s/2000s, and we need to leave it there along with spermy eyebrows. But honestly, who IS this person? She is absolutely unrecognizable in every photo now, and it just gets worse and worse. It’s not even just the standard hardcore plastic airbrush and giant lips that we’re used to with her. Her face proportions are completely warped—like, her eyes are just sitting really high on this big elongated face that she’s never had before. Her nose is like a chiseled brick. Her eyes are cold and dead. She looks like a literal cyborg. I would do a draw-over for this one, but it’d just be me tracing everything on the whole picture!

Why does this CGI robot woman have more recognizable features than Kim K? And she even has the giant anime eyes! Really, though, Kim’s face has been so mutilated and edited, it’s like someone Googled “generic nose” and “generic face,” and just slapped all these features together like Mr. Potato Head. She doesn’t have a single feature that shows character or is unique. Just a reminder, Kim used to look like this:

You know, back when she was a real, human person. This, of course, was prior to selling her soul to the Illuminati and getting replaced with a robot clone. This just goes to show, it doesn’t matter how much surgery you get done. If you’re insecure, you’ll still feel the need to warp your face in every picture. Also, can I just say how dumb it is to severely edit pics that are trying to sell your makeup? You can’t even see how the makeup works to bring out her features because it’s not even her face!! It’s all just smoothed over anyway.

Us begging Robot Kim not to kill us all:

It’s the stuff of nightmares.

In other news, some of you guys seem a little confused. Yes, Photoshopping/editing are everywhere, but are you also aware that sometimes people are thin and also sometimes they have clear skin? This does happen and is okay. It doesn’t mean everyone is edited or airbrushed. The issue we have with false editing is when it’s done so severely everyone looks like scary, plastic, robot blowup dolls. Please tell me you understand the difference. We’re fine with people being thin. It is a normal thing. Artificially removing ribs to look like you’re wearing an insane corset but you’re in a bikini is not.

And speaking of bikini, I’ve got to shout-out Hannah Rathbunn today. She’s from Are You The One? and is a model for Frankie’s Bikinis. She posted this and it’s so refreshing:

Look, it’s a totally normal, fit girl without ridiculous editing. (If you’ve been reading my fails, you’d be holding a ruler up to your screen right now and noting that the lines on that garage door she’s posing in front of match up! Yay!) Notice how her body could easily hold essential organs. This is someone who, again, is a bikini model, so she probably eats really clean, works out a lot, etc. But AT LEAST she doesn’t have insane, unrealistic proportions. I wish more celebs would post what they actually look like IRL. Even if it is surgically enhanced, it’s still better than the horrible edits.