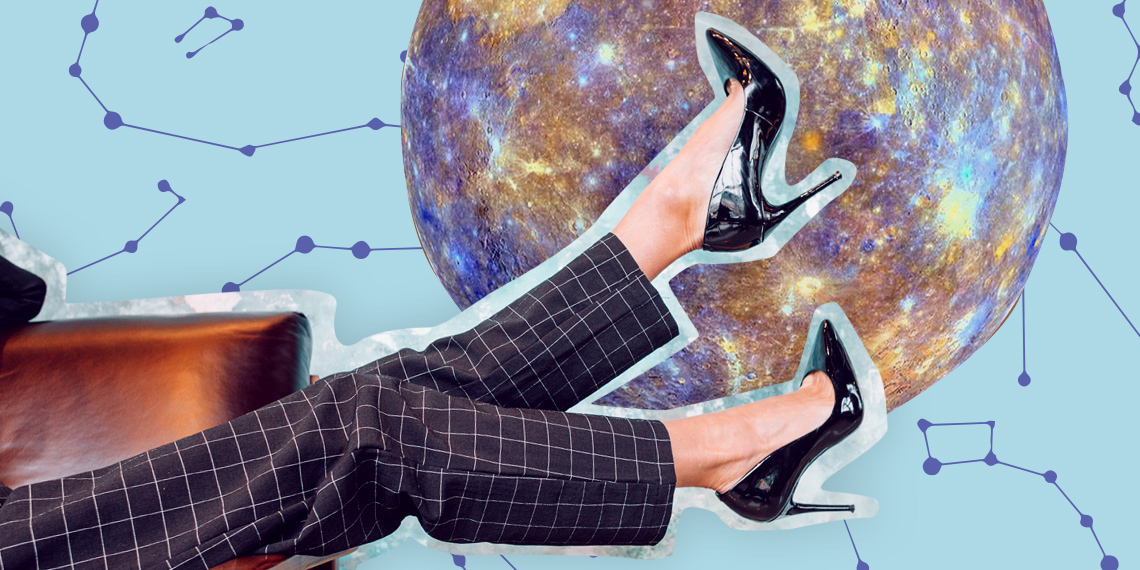 Mercury Is Retrograde & Here’s What That Means For Your Sign

You guessed it, betch. It’s that time again, but instead of making this your typical, “How To Survive Mercury Retrograde” article, I’m going to remind you why this notorious transit isn’t as terrible as it seems. However, before we look on the bright side of things, let’s talk about Mercury retrograde, and what it actually means. For starters, Mercury is the planet of communication, thought process, transportation, technology, and pretty much all the petty details we encounter on a regular basis–AKA paperwork, text messages, e-mails, receipts…the list goes on. Also, I know everyone talks about how Mercury moves backwards when it retrogrades, and well, I hate to break it to you, but that’s not the case at all. Fun fact, betch: the reversal movement is just an illusion from our viewpoint here on planet Earth. Meaning, Mercury does not reverse its orbit. When the messenger planet retrogrades, it simply slows down, which means everything it rules, AKA everything I mentioned above, slows down with it.

It’s no wonder we go apesh*t before every single Mercury retrograde cycle. I mean, how could we not? It also doesn’t help that people all over our feeds (who know nothing about astrology) are huffing and puffing, warning the world about something they have absolutely no clue about. However, there’s more to this uber-obnoxious astrological transit than accidentally butt-dialing your ex, and my personal fave, the shitty wifi. Naturally, we all expect it to be Armageddon, because well, we think if we imagine the worst case scenario, then that means we’re prepared, but boy are we wrong! Anywho, I have a point, I swear, and it’s this: retrograde cycles are for re-visiting, re-evaluating, re-assessing, and re-examining things that have been swept under the rug, whether it be a project or an important conversation. So, instead of crying wolf all over your social feeds, and praying your ex-f*ckboy doesn’t come back from the dead, why not just get your sh*t together? With that being said, Mercury will retrograde on March 5-28, 2019, and here’s how it might affect you:

Mercury will be doing its thing in dreamy Pisces, your yoga-loving 12th house of closure, karma, and subconscious realms. Here’s the deal, betch: You’re probably going to be feeling witchier than usual, and this is because the messenger planet will be communicating with you, but not in the ways you think. By that, I mean through your dreams, and via subtle undercurrents. Don’t be a workaholic, Aries. Take a chill pill.

The messenger planet will retrograde through your 11th house of friendship circles, teams, tribes, and extended networks. Not to worry, betch. This retrograde cycle may or may not reunite you with an old friend, or who knows, maybe you’ll get to squash beef with your current crew. BTW, I know you hate drama, but you also can’t help your RBF, Taurus. In the meantime, take advantage of this time to re-evaluate your sense of belonging. Are you being authentic with the rest of the world?

Bad news, betch: your ruling planet is retrograde, and so are you. However, don’t have a meltdown just yet. This retrograde cycle is asking you to revisit and reexamine everything related to your boss betch life, AKA your career, and perhaps your relationship with a prominent authority figure. There’s a silver lining, though. Once you get over the usual technology issues, feel free to tweak your resume, or finish applying for that bougie new job you’ve been eyeing.

Double check your travel itinerary, betch. Mercury will retrograde through your ninth house of travel, philosophy, and FOMO, so don’t be surprised if you suddenly start feeling incredibly restless. Not gonna lie, aside from the usual Mercury retro drama, this is a time for you to reflect and reassess the bigger picture, and where exactly it is that you’re headed. Stop overthinking it, and don’t be afraid to take a risk.

BTW, Leo: the messenger planet will retrograde through the most mysterious area of your chart, AKA your eighth house of sex, transformation, and shared resources. Nothing to panic about, Leo. This could actually be a really liberating time for you. That is, if you’re being authentic with your emotions, of course. I mean, how do you expect to connect with someone if you’re still keeping a huge guard up?

Cat’s out of the bag, Virgo: your ruling planet is hella retrograde, but it’s not as bad as you think. Mercury will retrograde through your partnership zone, so aside from the typical misunderstandings, this is a good time to revisit important conversations with your SO. What have you been sweeping under the rug? Nobody’s perfect, not even you, Virgo.

Time to get organized, Libra. Mercury will retrograde through your responsible sixth house of health and daily routine, but it’s not the end of the world. Instead, take advantage of this time to head back to that pilates class, or perhaps reexamine your day-to-day schedule. Are you overworking yourself? Something’s gotta give, Libra.

WTF inspires you these days, betch? With Mercury doing its thing through your expressive fifth house of romance, children, and creativity, you might just run into that toxic ex. However, that’s just worst case scenario. Instead of panicking, take advantage of this time to revisit that creative project you left on the back burner. It’s time you find your muse again, Scorpio.

Drama on the homefront, Sagittarius? Mercury will retrograde through your fourth house of home is where the heart is, and well, you might run into a petty disagreement with a sibling or relative. However, instead of trying to prove them wrong, why not speak your truth, and set some boundaries in the process? Ball’s in your court, betch.

Earth to Capricorn, come in, betch. This makes me laugh because this is so unlike you, but with Mercury retrograde doing its thing through your third house of communication, you could easily feel lost in translation or, in Led Zeppelin’s words, ‘dazed and confused’. Here’s the deal: stop questioning your current funk, and be more mindful of the details instead. This too shall pass, Capricorn.

Remember who you are, Aquarius. Mercury will retrograde through your second house of income, values, and self-worth, but instead of stressing the financial details, you might want to take a minute to re-evaluate your core values. What actually matters to you these days? Are you owning up to your self-worth? You’ve got things to think about, betch. Money is included.

Happy Mercury retrograde, Pisces. I mean…happy solar return! Sorry, it’s not that I forgot about your birthday season, it’s just that Mercury retrograde seems to be hogging all the attention these days. Anyway, here’s the deal: Despite the endless fog of confusion and general anxiousness, take advantage of this retro cycle to revamp your personal aesthetic, and unicorn wardrobe. You’re a real-life mermaid, betch. It’s time you let the world know.