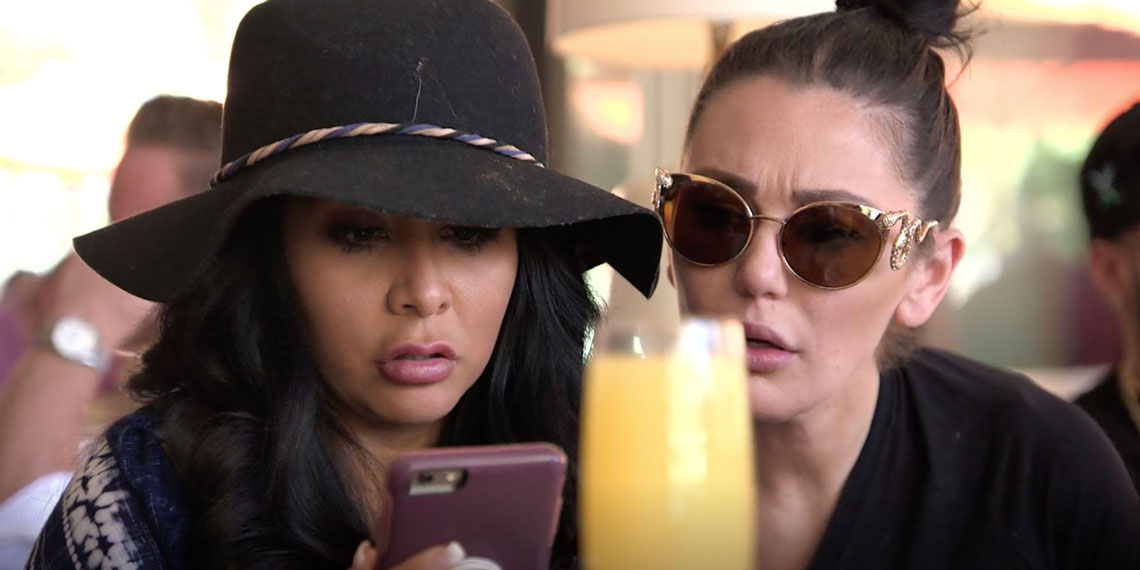 ‘Jersey Shore Family Vacation’ Recap: There Is No Shore In Vegas

We left off Jersey Shore Family Vacation last week with Jen attacking Ronnie like some kind of rabid peacock. Everyone else ran away out of fear for their lives and also, they wanted pasta. The fight was actually scheduled on camera by some sadistic producer that is def searching for a raise. Can’t wait to see how this one turned out. Maybe Ron and Jen will surprise us all by acting mature for the sake of their baby. Maybe they’ll apologize and work out a custody schedule like adults.

You know, or not. Oh, and she spat in his face.

The rest of the conversation is her swatting at Ron while spouting some version of “IMMA F*CKING WHORE, IMMA F*CKING BITCH”. Then the producers escort her out. So glad we did this, guys.

Everyone at dinner: Cheers to Ron’s f*cking lawyer!

Pauly: This is not funny.

I mean… yeah, abusive relationships are not funny. When did we think it could have been funny? Pretty sure this was clearly not funny from the beginning. They start drinking and laughing and generally just annoying me.

Vinny: Something’s in this wine because all of a sudden everyone is whacked out of their minds.

We then go back to Ronnie crying on the couch by himself. By “by himself”, I, of course, mean surrounded by no less than 20 sound and camera guys watching him cry. Reality TV is sooooo awkward. I wonder how many minutes of my life I’ve wasted watching Ronnie cry. Then the screen cuts to subtitles.

Subtitles: After Jen stormed out, police arrived to investigate what happened. MTV was not permitted to film the investigation.

Whaaaaaaaaaaat. Who called the police because Jen screamed about being a whore and swatted at him a little bit? I’m gonna say that same producer. Where is this woman’s Emmy? (Do producers get Emmys?)

More subtitles: After Ron and Jen’s fight last night, police arrived to investigate a call for domestic disturbance. MTV was not permitted to film the investigation.

Still more subtitles: Jen left the hotel and has been unreachable since. Ron is worried about the whereabouts of his daughter.

Wtf is with all the subtitles, this is like Intervention. Also, didn’t we already see this storyline?

Okay, so Ronnie is explaining to Jenni that he didn’t want to press charges but in domestic violence cases the state takes over and now Jen has a warrant for her arrest. So now if Jen tries to go to Oklahoma with his daughter, it’s kidnapping. Not sure this is true. Holyyy sh*t. When did this turn into an episode of Law & Order: SVU?

Ron: Now my biggest fear is that she’ll get pulled over in Oklahoma and she gets arrested by 30 cops. I don’t want to deal with that.
Jenni: This is the last time we leave Ronnie home alone. Ever.

Seriously, that’s a good call, this man needs a full-time babysitter. Jenni then suggests getting the police to do a wellness check on Ron, so he can take his child. Could you imagine explaining this to the cops?

Ronnie (probably): Uh yeah hi, so like, I want to take my baby out of her home to come live with me for a few months with my friends on a reality TV show where I’m hammered every night and trying to f*ck strippers. That’s cool, right?

The one thing this situation does not need is babies, but okay. The entire gang prepares to kidnap the baby while Jen gets arrested. What is this? The Departed? (To be fair, I’ve never actually seen that movie so this probably is the wrong reference.)

Pauly: Don’t tell them you’re with me, I have two parking tickets.

Pauly. There’s a time and place.

Ronnie gets a call from the police. The baby is fine, Jen is fine, and there is not a warrant for her arrest, so this was pointless. As suspected, Ronnie knows nothing about how laws work.

Ronnie: I didn’t want her to get arrested but now I’m pissed she’s not arrested and I want to see my daughter.

Did he not see her like two days ago? He keeps saying Jen’s keeping his daughter from him but he decided to go on a TV show where all he does is f*ck around and get wasted. Obviously the baby would not be present for that.

Oh look, Ronnie’s crying again. Remember when this show used to be fun?

Ronnie: It wouldn’t be the Shore house without chaos and fun.

First of all, there is no “shore” because you’re in Vegas. I’m pretty sure all they have is a sad little lake. Secondly, chaos and fun are not the same as domestic abuse and child custody battles. This is not fun, you psycho.

They finally go have actual fun and at the Voodoo lounge for dinner. To get there, you take a glass elevator like 50 stories up, prompting Snooks and J Woww to crawl on the floor and cry. K. There is an insane zip-line from this building to another. File that under things I would not even do for a million dollars. Okay, maybe for a million dollars.

Pauly and Ron decide to do the zip-line. Then, so do Snooki and Mike. I would definitely not do this. Wait, that was the whole night? WTF, when are they going to be crazy again? And I mean crazy as in drunk and sleeping with people—you know, what I expect from Jersey Shore. Not domestic violence crazy.

Oh noooooooo, now Angelina is packing to go to Vegas. Dirty Hamster herself is screaming about how Jenni is jealous of her and Vinny can go f*ck himself. Why go then? No one wants you there.

Pauly D is leaving to go DJ somewhere for a day. Vinny is so sad that he makes a Pauly D voodoo doll. He put a Pauly sticker on Pauly’s hair gel. The real question is why did Pauly leave his hair gel behind? How will get it to look like a Reese’s cup without it?

Jenni and Snooks decide to go to The Paris for brunch.

Snooks: I learned French from the Mary-Kate and Ashley movie.

Okay, Passport To Paris was the best. Except those movies gave me unrealistic expectations that I would get a vacation boyfriend everywhere I went, even when I was like 12.

Jenni to Mike: We’re going to Paris but you can’t come because you can’t leave the country.
Mike: I know, I can’t even go to Canada. They don’t let my kind in.

Yet another reason to move to Canada.

Snooki is cursing in the bathroom and at first, I was like, I don’t want to know, but turns out she’s on the floor looking at her phone. So they’re allowed to have phones, they just have to hide them? That is super weird. Snooki gets a text that Angelina is on her way and she’s like “oh f*ck, poor me, Jesus give me strength.” Like uhhh… you invited her and brought the Staten Island Dump back into our lives. This is your fault.

Snooki: We’re down a meatball and this is like a meatloaf. Like if you have nothing in the fridge but you have a meatloaf in case you might want it. That’s Angelina.

Snooki is trying to find a way to tell everyone what she’s done. Meanwhile, Jenni is arranging a wedding for Vinny to marry Voodoo Doll Pauly.

Snooki: I was trying to be nice but I should just always be a b*tch.

We all learn that lesson the hard way.

Mike then begins rubbing his penis against Jenni’s leg. Why. Then the boys update us that Angelina called J-Woww a Jersey Whore, blah blah blah. The girls used to love being Jersey whores. I’m disappointed in all of you.

They all decide to prank Pauly by putting Angelina in his bed so he gets home and she’s just there. Vinny is pissed that all his pranks on Pauly end up pranking himself because now he has to share a room with Angelina. However, he did sleep with her, so he can’t complain.

OH MY GOD, Angelina and Becca from The Bachelorette have identical cross tattoos on their hands. That is sooo funny.

Voodoo Doll Pauly has his own chair at brunch. Vinny apparently wants to get a girl for him too. Sorry Vin, I don’t think anyone wants to f*ck a hair gel bottle on TV. Well, IDK, I still can’t believe anyone would f*ck Ronnie, so maybe there’s hope.

Jenni’s contribution to the conversation: My son keeps asking me what his penis is.

(Sidenote: if you haven’t seen this show yet, it is very disturbing.)

Vin: Mike’s giving a whole new meaning to the term “rug burn”.
Mike: The rug was my best friend that year.

Angelina gets to the hotel while everyone is at brunch and immediately f*cks sh*t up. She goes to the front desk and asks for a reservation under Snooki’s name. Then she says, oh maybe it’s “The Situation”? “Pauly D”? Like, Angelina, obviously the room was booked by MTV. You are standing next to probably 15 of their cameramen. ASK THEM. She never told anyone else what time she was going to be there, and starts rage-texting Snooki that she’s standing there “like a moron”. Whose fault is that?

They all pray before they meet up with Angelina. Why was she invited? She is sooooo dirty and boring.

Snooki to Ang: Are you going to be nice to my friends?
Angelina: We have things to sort out.
Jenni: Well you’re not part of the family.

Off to a great start, guys.

Ang: Is it gonna be “stay and get your ass beat” again?

Vinny: This is your room .

Angelina hits Vinny and he starts screaming that he has now been assaulted and needs a lawyer.

Vinny, Angelina, and Mike all start arguing and I’m not really listening. Something like, Vin wants an apology for the slap. Ang says to apologize for trying to shove her in the shower. Vin says he was helping her out. Mike gets in the middle and Vin says to him, “shut up, you f*cking pink and yellow Starburst.” Hitting him where it hurts.

Angelina demands that Jenni makes her a drink. So Jenni calls her a b*tch. I’m sure this will end well. Until next week!