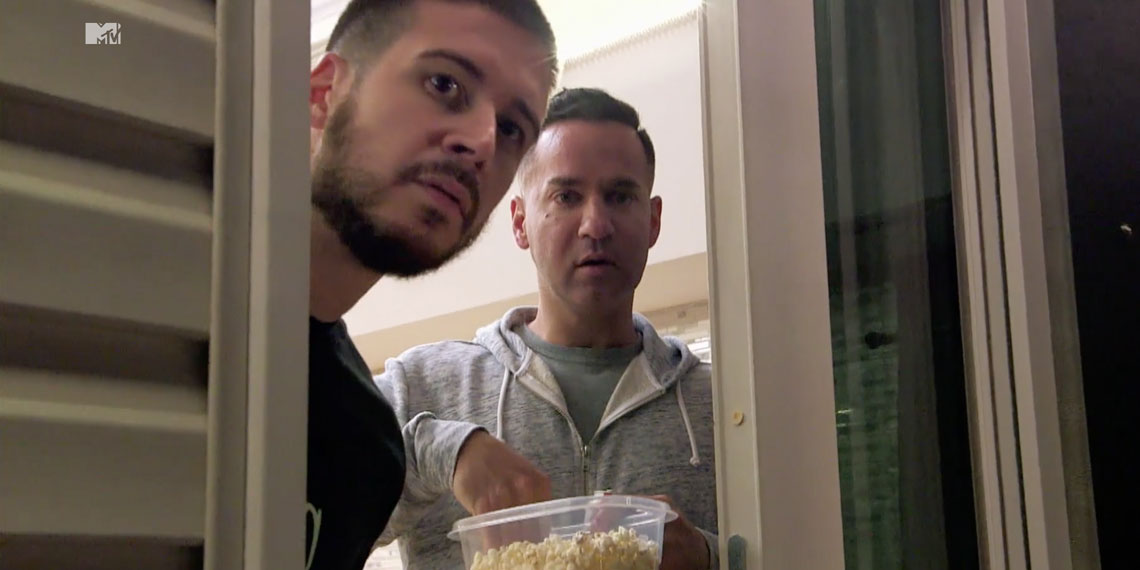 Buckle up, Jersey Whores, we have a double feature tonight. MTV is unaware that I have other sh*t to do besides watch three hours of these people and recap it. We left off with Vinny and Ang’s sexual tension leading to either smushing or murder. I don’t care which at this point, just let it end. We also saw in previews last week that Ronnie is going to resume his throne as King of Trash by once again cheating on Jen. She already tried to kill him, I don’t know why he continues to test her.

Vin and Ang scream at each other at the dinner table while Mike sits in the corner stuffing his face. He is definitely stress eating. The screaming ends eventually and they all go sit in awkward silence outside.

Mike: So Angelina, how does it feel to mess with a Bromitted man?
Vin (harsh maternal tone): MIKE.

Mike is so bored he’s trying to instigate sh*t, I don’t blame him. Then they go to bed. What kind of world is it where I’m relieved that Ronnie acts like scum? I need more entertainment than this.

Mike is going to do a burger challenge at Headliner’s. Vin and Pauly make jokes about how he’s been training for this moment.

Vin: He beat drugs, he beat alcohol, the only thing Mike has not beaten is the IRS.
Pauly: YET.

I have bad news, guys.

Okay so this burger is 10 pounds and you have to finish it in 10 minutes. I could have totally done this in high school. If you can’t finish it in 10 minutes, you wouldn’t be able to do it anyway. Oh my God, it looks so disgusting. It’s huge and like 20 patties, bacon, onion rings, probably small children, etc. Ew. Vinny, Pauly, and Ron are all on one burger together to see if they can beat Mike. I mean honestly, this is insane for three people anyway. They’re all going to vomit and I cannot watch that kind of nasty. This is when they are informed that no one has ever beat the challenge.

Mike is eating way too slowly. He’s eating like one onion ring at a time. I wonder how many calories this monstrosity is. At the four minute mark, Mike begins cheering for himself and ignoring the task at hand. He is so slow. He’s barely eaten anything. He has 30 seconds left and he barely ate half of it. So lame.

Mike: I may have done better if there was Funfetti cake in it.

Vinny: Watching The Spiral Squad is like being at the zoo, watching the animals from behind the glass.

This is when The Spiral Squad gets an honorary member, Angelina’s trashy friend Lindsey. She has full on silver and black eye shadow up to her eyebrows. In the daytime. This is not even an acceptable evening look. Ronnie, of course, thinks she’s hot. Because she’s a woman. Or more likely to him, a hole.

Pauly: This girl is extra. She has extra makeup, extra outfit, extra hair.

They get home and Mike calls Generic Blonde Lauren that he f*cked up his diet. I mean he didn’t finish it, but he definitely probably ate six full burgers, which is disgusting. If Lauren is fine with Mike cheating, being addicted to drugs, going to prison for fraud, I doubt being fat is a deal-breaker.

Snooki is lying in bed with heels and sunglasses on and it is a mood. Pauly puts on his giant bedazzled Jesus necklace. Where do you even buy this? They start talking about how Angelina’s friend that is 85% eye shadow is known “in the streets” as Jewish Barbie, which I take huge offense to. We Jews know how to look presentable.

Mike: Ang, what do they call you in the streets?
Ang: The Staten Island Ferry.

Pauly makes a face that I swear is the emoji with the big eyes and straight mouth.

Snooki then decides to start vomiting, which makes me furious because I thought we avoided this issue after the sandwich contest. I can’t listen to this. Jenni and Snooki are like, “why is this happening?” I mean IDK Snooks, it’s almost like you can’t take 14 shots in the middle of the day on an empty stomach when you’re in your 30’s. Sorry bitch, you’re old now.

Snooki: I might be pregnant, me and Jionni have been trying to have a baby.

Okay. WTF. Call CPS. If you’re trying  to get pregnant why the f*ck are you drinking like this? Your kid already will have your idiot genes, give the poor thing a chance! Snooki rallies and they all go out anyway. Ronnie begins rage texting in the cab. Obviously it’s with Jen. They don’t even see each other and they still get in fights every two seconds, it’s truly an art form. Snooki decides she must be pregnant so Jenni and Snooks go to buy a pregnancy test.

They go back to Headliner’s and Trashy Jewish Barbie is there, still in her camo pajama shorts and matching sweatshirt. Did she even go home? Her shellacked on black and silver eye shadow is still holding up great though, what primer does she use? Ronnie is sitting in the corner, still grumpy texting.

Ron with his phone:

Ronnie: Jen is sending me pictures of my ex with her new boyfriend, saying that’s how happy I’m gonna be, and she’s so happy she’s not with you, and she’s gonna find another guy to take care of my daughter.

That is f*cking harsh. Is it Sammi? I hope it’s Sammi. Why doesn’t he just block her number when she does this? Who wants to talk to someone like that?

Meanwhile, Snooki is looking for pregnancy tests she can understand, ones that say “yes” or “no”, not lines or crosses. Back at the club, Ronnie finally puts his phone away and starts taking shots.

Trashy Barbie is flirting with Pauly and puts a sticker of his face on her ass. I love that Pauly walks around with stickers of himself. I need to get to that level of extra. Snooki’s pregnancy test comes back negative. Shocking.

Snooki is super disappointed that she’s not pregnant when she should be relieved that she hasn’t caused serious cognitive issues to her fetus from her drinking. Priorities, bitch. Pauly asks Trashy Barbie if she’s coming home with them. Vin offers up his bed. She’s sitting next to Ron. It really could go one of three ways. (Or all three? Ew.)

Snooki: Jewish Barbie is the hottest chick in this bar and all the boys want her.

That says a lot about the quality of this bar.

Ronnie jumps in the girls cab to intercept Trashy Barbie first and everyone is like, “Ooooooooooooooh.” Vinny and Pauly are both mad. Ronnie asks her to go swimming. Oh, here we go. Angelina, warn your friend! What kind of girl code is this? No one deserves to be subjected to Ronnie’s Tours (TM).

Angelina asks Trashy Barbie which of the guys she would F*ck, Marry, Kill, but she politely says “get rid of” instead of kill. Or maybe that’s what you call it in Jersey.

Immediately Trashy Barbie is like, “kill Mike, I hate that guy.” She would marry Pauly D (good call, he has the money). And she would f*ck… *drumroll*…. RONNIE, in a surprise twist. Except not really because they showed it already in the previews. Looks like that keto diet is for nothing, sorry Vin.

Ron is f*cked. He goes to sit next to TB and they flirt about pizza and the color blue while gazing into each other’s drunken eyes. Ang is just looking on in disgust.

TB: Are we gonna go in the Jacuzzi? You only live once.

Yes honey, but herpes is forever. The rest of the gang is all sitting together and judging as a collective group. Ronnie doesn’t bother putting his bathing suit on because, as Pauly astutely figures out, “it’s going to come off anyway.”

Why would you suggest getting in a hot tub with a random girl, drunk and alone, if it’s not to hookup? It just seems like a waste of time. TB goes to the full length mirror in her bikini and checks out her ass for a full five minutes in front of everyone. It’s funny how the group really doesn’t care because everyone hates Jen. They get in the pool.

Pauly: Ronnie, did you not see what happened to Ronnie after the last time? How dumb can you be? This girl is gonna drag him for another car ride.

Vinny is watching them through the curtains. She’s inching closer.

Vinny: They’re about to make a matzo ball soup in the hot tub.

Now all the guys are pressed up against the window.

Vin is literally giving a play by play. He’s so mad this isn’t him right now.

Pauly asks Jenni and Snooki if they would consider this cheating if it was their significant others. Everyone is like, yeah no sh*t. Pauly says he wouldn’t even let Vin do this with another man. Jen is going to murder him. OH MY GOD, Jen then texts Jenni because she can’t get ahold of Ron.

Ang: What do you think he’s saying to right now?
Jenni: I am the president and CEO of the I’m F*cked Foundation.

Jenni makes a really bold and dangerous move and does not tell Jen anything. Jen is probs watching this right now so if we hear about Jenni and Ron both murdered tomorrow, I think I know who did it.

Jenni: Ron is going to have to change his name, his age, his nationality. He will have to be legit Puerto Rican Jesus in Puerto Rico.
Pauly: I can’t understand this man’s mind.
Vinny: This man is a legend. History books will be written about Savage Ronnie.

Snooki gets on her stomach to watch on the balcony. Everyone follows. Mike is eating a bowl of popcorn while he watches. This is amazing. Oh God, they get out of the hot tub. TB asks Ronnie for a shirt. She legit came here in pajamas, she does not need to be borrowing clothing. It’s on.

Ronnie: There goes my life.

Bye Ron, it was nice knowing you.