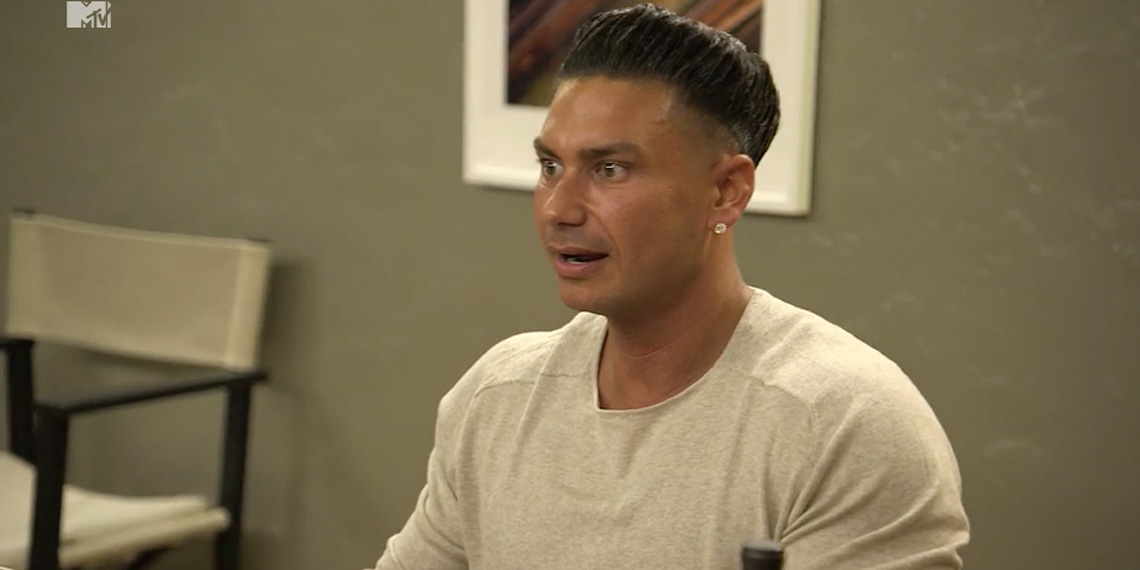 Welcome back to another episode of Jersey Shore: Family Vacation. Last week was a giant cock tease for Angelina’s appearance, if you’ll recall. This week, Angelina has finally arrived to the house, and I’m ready for her to destroy shit. The girls greet her so awkwardly. I don’t blame them, Angelina literally bailed and tried to come back three times. It’s annoying. You obviously don’t like these people, Ang, quit trying to get in on their fame after the fact. I do appreciate how Snooki is beating the shit out of Ronnie for this when it was definitely Pauly’s fault. I guess things are usually Ron’s fault in this house.

Snooki: Angelina said three months ago how ugly I look.

Ok, so Angelina, Snooks, and Jenni have all purchased the exact same face with muppet lips. Soooo is that not just calling herself ugly?

Angelina now wants to bond, eight years later. Wants to bond or wants to sell Instagram tea? I’mma say she’s here for the wrong reasons. Is that a thing at the Shore? What are the right reasons for this show? Drinking? Angelina is claiming they don’t even know her. Like they didn’t do, what, three semi-seasons with her? Is she delusional?

K, Vinny is killing me with the accent and everything, he is pretty funny—

Vinny: And then Nicole is fucking her vagina—I mean, uh—

He ruined it. Also, it’s very, very strange to me how hard up he is for Snooki. He’s edging on the brink of the Ronnie-Sam obsession.

Jenni is finally showing some balls and is stirring shit up instead of just sitting with her grandma glasses in the corner. She told Angelina to GTFO, and Angelina refused. This is when the J-Woww I know would punch her in the face and drag her out by her hair. Instead, nothing happens. Motherhood makes people dull.

Ronnie: What do we do?
J-Woww: We ignore it like genital herpes.
Ronnie: No you take medicine for that.

I am not even a little bit surprised that Ronnie knows this.

Snooki is going on that she is not a Lego and she’s not Lego-ing this girl as she slaps her hands on top of each other, as if the gesture explains wtf she is talking about. It does not.

They’re going to have a Meatball Day to get away from The Evil Presence in the house. Somehow Ronnie falls on his head. I feel like this happens to him a lot. Oh, so he hits his head and then invites Angelina to Meatball Day.

Snooki: I have like a devil and an angel on my shoulder. ‘Noooo, give her a chance’, ‘No, she’s an asshole, kill her.’

Weirdly, these are exactly my thoughts navigating through LA traffic.

Angelina is now an EMT, which really scares me. Could you imagine having an emergency and Angelina shows up to save you? Also, Ronnie cheats on Sam. Ronnie lies. Ronnie fucks around on his baby mama. Ronnie can’t use a toilet. But he makes one comment saying Snooki got her lips done *which is a fact* and now Snooks is like, he’s gone too far? It’s good to know where that line is.

Snooks got a phone and is reading to Angelina what she said about her. So, so awkward. Here’s what it is:

“She’s trying to copy my look. I don’t really like the new lips, they’re not doing much for her to be honest with you. I don’t know what the hell that’s all about, but whatever.”

Angelina has a look that we call “poop face” in my household. It’s the face your dog gets when she feels guilty for pooping in the house. But I guess Angelina has matured, because she just apologizes and the girls move on. God, I miss the old days.

Nicole and Angelina are now pretend fucking on a table. K. Now they’re on the floor.

Back at the house, Jenni is pissed that Snooki and Ang are now lovers. Angelina to trying to explain how she apologized today, and Deena is just sitting in the background mumbling like the fucking Cookie Monster. Does she think her comments are helpful?

Jenni reintroduces herself to Angelina as a gesture of starting over, which drives me insane when people do that, it is so weird and so fake. Just stop talking shit about each other and move on. What is the pretend introduction for? Jenni then scolds Deena because she keeps incessantly interrupting their conversation, and Deena is like, “I know I’m so annoying, I’m the worst!” and starts sobbing. I could not be friends with Deena. I guess admitting you have a problem is the first step.

Ronnie then violently shoves Deena into the pool. Is that not a drowning risk because she’s so drunk? Maybe she’ll find Sex Doll Sammi down there. Now Deena is crying about being pushed in the pool. She is soooooo dramatic. Also? I personally am offended by this, because when I talked to Deena about the new season at the premiere party, she said she was so proud of herself for being more mature this time around and standing up for herself. Like, wtf Deena? You were sloppy af and cried about nothing, but yeah, super mature.

Ronnie throws Angelina into the pool too. Idk why, but for some reason, that one I think is funny??? Nicole wants to know if Ang has ass injections. She shows her her ass. Not sure how this verifies anything? They don’t put the injections on the outside of your ass, right?

They call in some vitamin guy—is this a doctor? unclear—to give them IVs so they’re not hungover. I would love this because I hate drinking water. Nvm, there’s blood everywhere. I’ll just drink water, I cannot handle this.

J-Woww’s expertise seems to only be in lip injections, supervising adult male haircuts, and picking out engagement rings. She invites her friend to help Mike make a ring for Lauren. Yawn. Oh wow, that was the whole segment? So glad they included that. Angelina and Vin are arguing about whether Staten Island is trash. I live in LA, I don’t have an opinion on this. #CantRelate Pauly calls a family meeting because he accidentally pranked himself and Angelina is still here. That is fucking harsh. How did he expect her to leave? I guess via her hair by Jenni?

Okay, they’re all out to sushi and Mike is ordering literally everything on the menu. They even have special fat music playing the background for it.

Vin: Mike is auditioning for Man vs. Food.

That is my favorite game to play also, so fuck off Vinny. Angelina is saying she’s realized her mistakes blah blah blah, and Snooki’s like, “oh I feel bad because I like her, but also, she has to leave.” This is fucking mean to invite someone and then kick them out for no reason. It’s like a 7th grade sleepover where you think you’re invited because they like you, but really they are trying to make you fall asleep first so they can stick your hand in a glass of cold water. Jenni was voted to kick her out. I can’t imagine that will go over well. I guess we’ll find out next week.