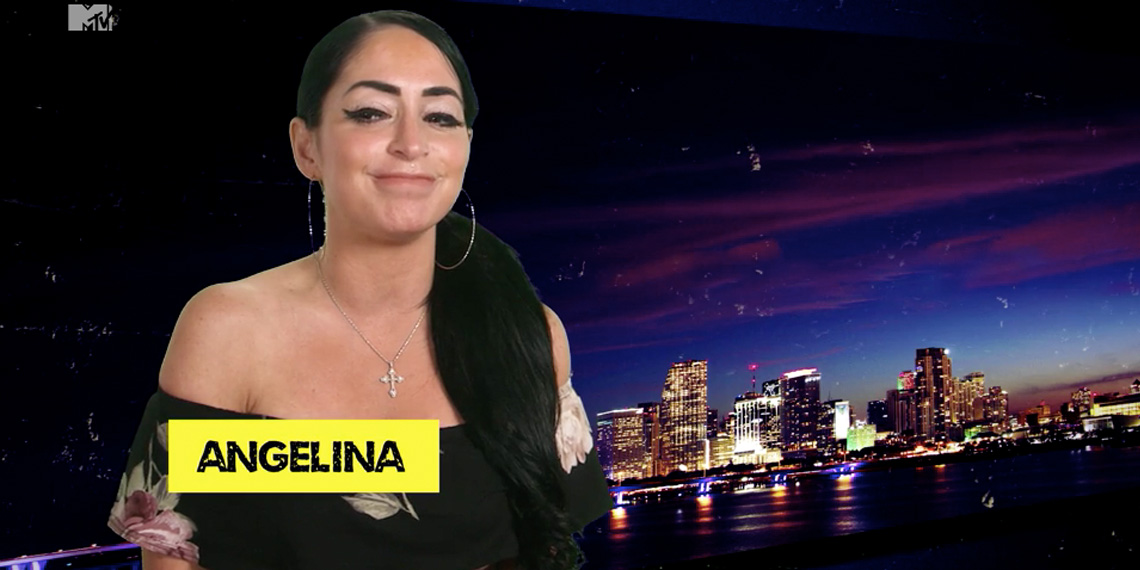 Tonight on Jersey Shore: Family Vacation episode 11, we left off with Jenni very carefully breaking up with Angelina. Still unclear why anyone invited her to stay in the house at all. Like Pauly, could you not have a prank where she shows up at the same bar as you? Then when you’re sick of her, you can just leave. This is exactly why I always host parties at bars instead of my home. If you let them into your house, people will never leave and then they touch my things.

Jenni: I want to get to know you more, but I also want you to go away forever.

Super fucking harsh Jen, especially because they’re in public. Like, you’re hoping to breakup with her in public so she won’t make a scene, obviously.

Angelina: I just wanted to be accepted by the group for eight years, even though they still don’t want me around.

Can you imagine wanting to be accepted by the Jersey Shore cast for eight fucking years? That’s a new low, even for you Ang. It’s killing me they’re all being like “oh, nostalgia, Angelina’s last night, we love you, wish she could have stayed.” You forced her to leave. It’s like those guys that dump you and are like, oh I wish we could be together. Like, that’s super weird, because we totally could be except, you don’t want me around.

Angelina wanted to go out with a bang, so to really secure her reputation on national TV, she shat herself in the cab. Great job, Angelina, I’m sure everyone will respect you now. This is obviously why they call her the Staten Island Dump.

Oh now Angelina’s saying it’s period shit. That isn’t a thing. I don’t think she knows how periods work. Also, must she keep talking about it? This is grossing me out.

Vin & Pauly: At least no one will ever find out! We’re not going to tell anyone!

Mike, who really, has he been here AT ALL?, is shocked to find out that Ang shat herself, even though he’s been sitting there the entire fucking time. Oh good, to help the situation, Ang is now trying to show us  her soiled fucking panties. I’m gagging. Get her out, get her out of the house, and burn her with fire, and possibly holy water.

Also. She’s trying to show her panties as proof she didn’t shit herself, but did she not immediately run to the bathroom when they got back to change said panties? Sooooo I’m not a fucking detective, but your evidence has been tampered with, bitch. Also, what the fuck kind of job is this that this is what I’m writing about right now? My parents are probs super proud. I have a $200,000 college degree and I write about whether The Dirty Hamster of Jersey Shore shat her pants or not. Changing lives.

Angelina: Everything was going so great , and now I ruined it because everyone thinks I shit my pants .

Hate when that happens. I’m pretty sure they’re also repulsed by her for trying to force them to look inside her dirty panties. Like, that has got to be sexual harassment. I really like that Angelina then consults the Drunk Pants Shitting Expert of the house, Snooki. Angelina is crying because she’s embarrassed about the people in the house. Like. This is on national TV. It’s going to get so much worse.

Just when I thought I could not be more disgusted by Angelina, she wakes up with all her makeup still on. She does not take off her makeup or wash her face. Ohhhh and now, Angelina is trying to claim she doesn’t remember what happened. Classic.

Angelina: I’m just really glad to show them how mature and classy I am now.

Yeah. That’s what we all got from this. Maybe next time you could bring Pampers.

Florida wasn’t enough of a vacation for our favorite guidos, so they all went to the Bahamas to really fuck shit up. Let’s hope that they all make an effort to be interesting for once—like I swear, you could cut half the cast off the show now and I wouldn’t even notice. Mike’s only storyline is that he eats, Deena’s is her crying over her relationship, Jenni’s entire personality is now wearing glasses, and Pauly is just kind of smiling in the background.

Me waiting for something to happen:

Meanwhile back in… Jersey… New York….? Idk, somewhere cold where Vinny is from, Vinny’s mom is freaking the fuck out that she can’t get ahold of him and wants to fly out to Miami just to check on him. What is like to be that loved? I could be dying in the hospital and my dad would still be like, “K, I’m really busy golfing right now, will you still be dying in about two hours?”

Weird, that’s what I say too. Mike is now talking about his need to eat every two hours. Me tooooo. I love that the whole “eat small meals all day” thing is trendy right now. Except sometimes they end up giant, 900-calorie meals. But like. You gotta keep that metabolism stimulated. Mike has eaten chicken fingers, a burger, two orders of fries, brownies, cookies, and a cheese plate, and then promptly passed tf out. Right before dinner. Everyone is waiting for Mike for 45 minutes, and Jenni loses her fucking shit. This is exactly what happens to me when I’m hungry. I get real fucking mean if you try to keep me from eating, and God help you all if I’m also hot. Mike is now describing his stomach issues. Idk dude, maybe you shouldn’t eat everything in the world right before you go to dinner?

Now Mike is talking about proposing because we already talked about eating, and he’s only allowed to discuss two topics on the show.

Back in Miami, Vinny’s parents (or wait is that his uncle?) are storming into the house and screaming, “WHAT THE FUCK,” in thick Italian accepts. Love them. Vin’s mom is stocking the fridge anyway.

Deena: I love the Bahamas but I didn’t learn to speak any bohemian.

Sometimes I really wonder whether they feed Deena the things she says. Mike is insulting Ronnie by calling him pasta or something. Ronnie responds by calling Mike fat and telling him not to drop the soap. And that he has love handles for his new boyfriend, Bubba. Mike then says Ronnie cries a lot. Mike’s insults are not great. The gang talks about how dirty the house is going to be when they get home and how they should hire a cleaning lady. Cut to Vinny’s mom scouring the entire house. Can I borrow her? Like, is she adopting? Uncle Nino is smoking a cigar by the pool in his speedo, loudly complaining about the “squishy room”. Vin’s mom is now cooking. Wtf. Where do you get moms like this? I grew up eating fucking Doritos for every meal.

The episode ends with Vinny being a Mama’s Boy as always, and tbh, I can’t blame him. Why the fuck is he even here with this kind of service?

In next week’s previews, Mike is apparently going to propose and Jenni wants to fuck it up. Finally, some excitement from that corner of the group that hasn’t done shit all season. You’re letting Ron, Vin, and Snooks carry the team, guys. Step it the fuck up.