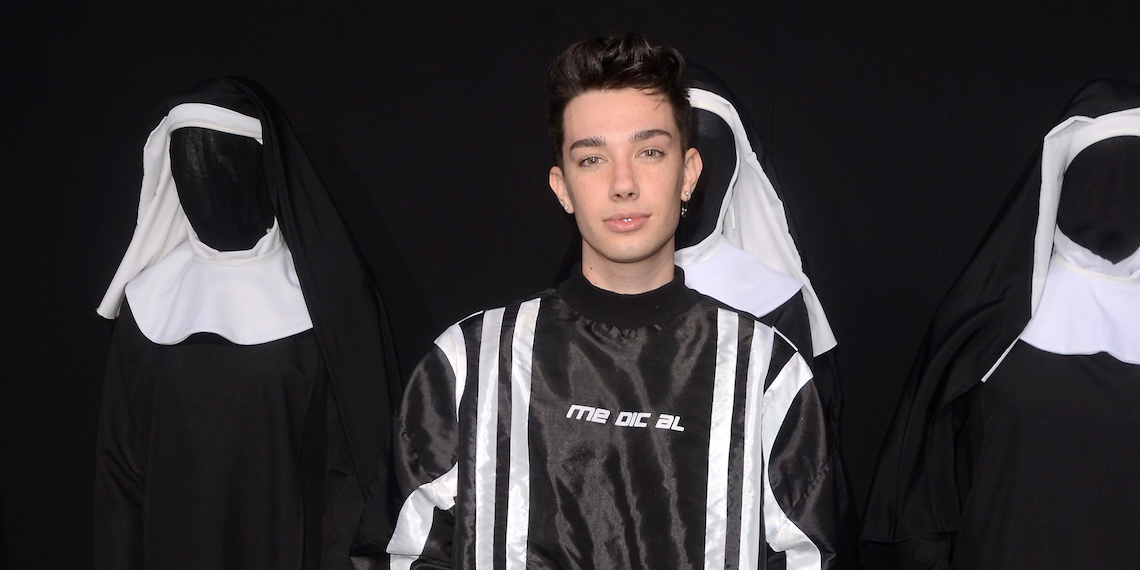 It’s only been a few days since James Charles and Tati Westbrook officially put their feud to bed, but it looks like people are moving on like nothing happened. Tati is probably still on her digital break, but James Charles was spotted out and about on Tuesday evening at the hottest party in Hollywood: the launch of Kylie Skin.

Before we dive back into the world of YouTube drama, let’s talk about this party for a second. As is customary for a Kardashian party, Kylie Jenner’s skin care launch was a huge ordeal that probably cost more than you make in a year, and everything was millennial pink to match the Kylie Skin branding. There was a roller skating rink (complete with skate-up bar), a life-size glass magazine cover to pose behind, and lots of foods that are definitely good for your skin, like French fries, ramen noodles, and some pizza that looked like Fyre festival rations.

Watching Kylie’s Insta story, it seems like she was genuinely having a great time at her party, and there has never been more of a mood than Kylie Jenner roller skating to “Old Town Road.” The guest list included Kris Jenner (obvi), the three Kardashian sisters (no Kendall), and a somewhat surprising appearance by Caitlyn Jenner. But forget about the family, because the most important guest at this party was obviously James Charles.

James didn’t post anything about the party on his social media, where he’s still just posting random things about being positive. Instead, James was spotted in the background of a video on Kylie’s story. James was at the party with fellow YouTubers Nikita Dragun and Gabriel Zamora, and in the video Kylie is screaming like a banshee to get Nikita’s attention. If you’ll recall, Nikita is the one who posted her Coachella texts with James to support his story about the vitamins. Gabriel also played a whole hand in the drama, and his accusations thrown at Tati were part of the reason she made her initial “Bye Sister” video. It’s all very complex, but basically these three have stayed tight through all the drama.

Here’s a video from Nikita’s story of them showing up to the party together:

What makes James Charles’ presence really interesting is that Kylie Jenner was one of the many celebrities who unfollowed James on Instagram amidst the fallout from Tati’s original video. As of this morning, Kylie still isn’t following James on Insta, but she isn’t following Nikita or Gabriel either, so who knows how much that actually means. Clearly Kylie’s following list wasn’t what they used to make the guest list here.

Kylie Jenner was far from the only famous person to unfollow James Charles after the Tati drama. Kim Kardashian, Demi Lovato, Halsey, and Shawn Mendes were just a few of the famous unfollowers, and none of them have re-followed him yet. While I’m sure e would love for Kim K to follow him again, clearly he’s doing okay in the mean time. Better than me at least, because somehow my invite to the Kylie Skin party got lost in the mail. Sad!

So does this mean James Charles is making a comeback? Honestly, probably, yeah. He’s already gained back about half of the subscribers he lost in this whole fiasco, and his diehard fans never left. It might be a few weeks before he’s back to his normal routine of posting makeup tutorials on YouTube and ass photos on Instagram, but he’s definitely on the way back up. Woo hoo, I guess.