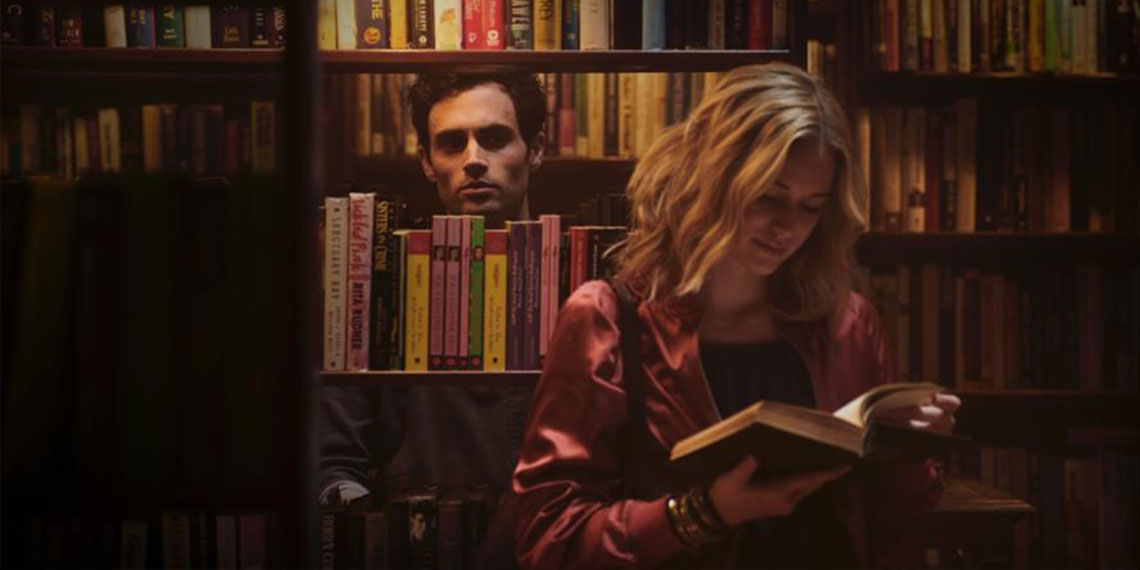 I started watching Lifetime’s YOU for the same reason I assume everyone did. As a self-loathing 24 year-old with an English degree an ex-Gossip Girl addict, I missed watching Penn Badgley condescend to women about literature on my TV. And YOU does serve up plenty of that—but it also serves up a narrative that walks through very dangerous territory. As the show follows the story of one guy’s growing obsession with a girl, it has the potential to fall on the side of harmless, bingeworthy pop-horror—or on the side of sexist, hurtful garbage. Here’s why I’m a little worried it’ll be the latter.

For those who don’t know, Lifetime’s YOU is about a crazed stalker/bookstore owner named Joe (Badgley) who becomes obsessed with an MFA student/generally insufferable “poet” named Beck. (Guinevere Beck in full, just to give you a sense of the writing we’re working with here). The show is (mostly) narrated from Joe’s point of view, a device that’s apparently carried over from the source material. We hear as Joe decides to indulge his obsession: following her, breaking into her apartment, stealing her phone. We hear the judgments he makes as he examines her life: her friends are shallow and stupid; her choices in men are hopelessly misguided; and above all, she needs to be rescued from her own worst impulses. Rescued, of course, by Joe.

The decision to have us hear Joe’s thoughts is useful, to an extent. We hear the jumps in his logic early on (“I should Google her” becomes “I should masturbate outside her window” very swiftly), establishing firmly that he is disturbed and we should treat him as such. But hearing his thoughts also creates an instinctive desire to understand him, as you experience the story through his eyes. And given that the show’s view of Beck does very little to contradict his impressions—her friends are portrayed as rich, unsupportive airheads, and her pseudo-boyfriend is a celiac entrepreneur with a trust fund. To an extent, YOU tells us that Joe is right, and Beck does need to be saved from these monsters.

Of course, you could argue that the story is simply uninteresting if Beck is an unflawed character. But in the first four episodes (SPOILERS), we see Joe save Beck’s life, help her work through deep-seated issues with her father, and re-invigorate her confidence as a writer. Yes, we also see him murder a man in a bookstore basement, but YOU does everything short of casting Donald Trump to ensure that we want that man dead anyway. For every act or thought that could only belong to a complete maniac, Joe is somehow given an equal and opposite opportunity to prove himself as Best Boyfriend Ever. And between that dangerous balancing act and the flashbacks to (what I assume is) Joe’s abusive father, I’m getting a little concerned about the picture YOU is painting.

Ultimately, the question of how much we want Joe’s character humanized is key. The more we watch Joe have a positive impact on Beck’s life, or hear Joe’s opinions and agree with them, or are shown flashbacks intended to make us feel sympathy for Joe, the more we’re distanced from his active decision to prey on a strange woman. Every time Beck’s friends are mocked or demonized for questioning her choice in Joe (ostensibly, because he makes no money), it complicates the narrative of “man terrorizes woman.” In an odd way, the story instead becomes “Joe is so great for Beck—if only he weren’t also a terrorizing psycho!” It suggests, in turn, that Beck would be better off if someone like Joe came into her life. Just a version without childhood trauma that causes him to stalk and kill people.

But I never sought out this show in hopes of watching a woman get saved by a man. I came hoping to watch a terrible man behave terribly, and eventually be punished for it. I came for the kind of justice that’s rare as ever in our current world, where a bad man is outed and punished appropriately. Instead, I’m getting the same of what we see in the news, or what’s been written in every book with a male author since the dawn of time. A man did a bad thing—but it’s complicated, and he had a bad childhood, and we shouldn’t be so quick to judge, and hey, she’s not perfect either!

Like I said, I understand the need to have “complicated” characters on both sides for the overall non-awfulness of the story. But when you’re showing Beck swiping indiscriminately on Tinder and Joe driving around a corpse in his trunk in the same episode—and implying that judgment is equally deserved for both—I’m going to lose a little patience. Explore Beck’s character all you want, but portray Joe the stalker as the monster he is, and not as a morally comparable puzzle we should all be eager to solve.