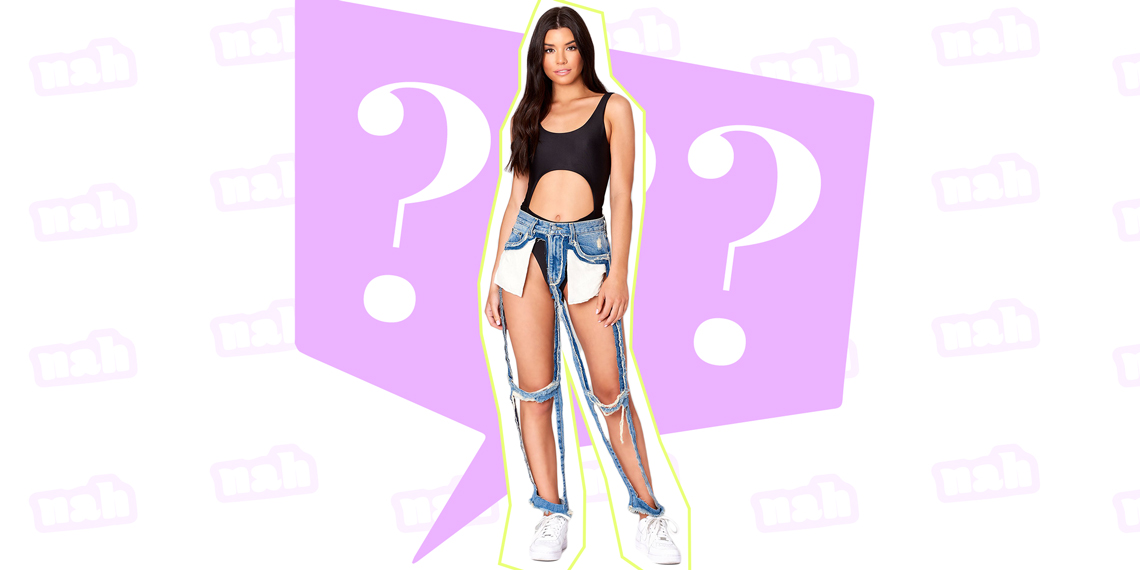 Somebody Please Explain Why These ‘Invisible Jeans’ Exist

If you’ve ever worn ripped jeans around anyone over the age of 40, then you already know what the repercussions are of doing so. You can almost hear it now: “Looks like you’ve got a hole in your pants!” “Did you get attacked on your way here?” “Why would you pay money for those?” Well, if Grandma thought your knee-bearing, distressed jeans were the worst of it then, oh boy, she’s got another thing coming. If you want to really send Grandma into cardiac arrest next time you see her then just wait till you hear about invisible jeans.

If you haven’t been living under a rock for the past week, you’ve seen the infamous “extreme cut-out” jeans that are breaking the internet, or at least social media. If you haven’t, these jeans, also known as “invisible jeans,” are basically the equivalent of a denim thong attached to denim anklets, via a denim string of side hemming. Can’t picture it? Good, you probably don’t want to. These “jeans” (if you can even call them that) are sold by Carmar Denim, and are actually a knockoff version of a pair that debuted on the runway last fall during Tokyo Fashion Week (yeah, I didn’t know that was a thing either). This knockoff version is now infiltrating down to the everyday consumer market, just like the color cerulean. I first saw a version of these jeans last spring on Kendall Jenner. I decided that the outfit was cool, but like, the kind of cool strictly reserved to celebrities. Invisible jeans would obvi never actually become a mainstream trend because they’re way too impractical. Or so I thought.

Well, since my first encounter with invisible jeans, something in the air has changed. I don’t know if people stared at the solar eclipse for too long, are in a bad mental state since Avicii died, or are all just taking whatever drug Kanye is on. Whatever the reason, people are actually, like, buying these jeans?? These minimal strips of denim are being sold for $168, and they’re already sold out. AND, even better, there’s legit a waitlist. Lord Jesus, fix it. Just take a look at this monstrosity:

Tbh, contrary to popular opinion, I do actually kindaaaa like these jeans. No, I’m not going to run out and spend $168 on them, but if I were one of the Kendall or Gigis of the world, then I would totally buy these to wear to Coachella or some shit. However, plot twist, I’m not a successful model, and therefore I have no business buying them.

So now this leaves me with a question: Who the hell is buying these? And, even better, who is on a waitlist for them??? Most people I talk to don’t even like them! Then again, most people I talk to are sane, so perhaps my methodology is biased. My only guess is it must be a bunch of Instagram models and washed-up Bachelor contestants who are buying invisible jeans so they have an excuse to show off their asses while attempting to stay relevant.

I know it sounds like I’m being a petty hater and all, but that’s because I am. I’ll admit to you that it’s because I’m kind of jealous. Like, I dream of a life so ludicrous (wonder what he’s been up to these days) that it would actually warrant me spending over $150 on a few loosely placed seams that I could easily make myself with a trip to a thrift store and some scissors. I’d love to get one of these expensive af denim thongs to wear once for an Instagram pic and then toss them into my closet for the rest of eternity, never to be seen again. Unless of course, I miss laundry day or something and am in desperate need for a pair of underwear. On second thought, maybe I’ll get on the waitlist after all.