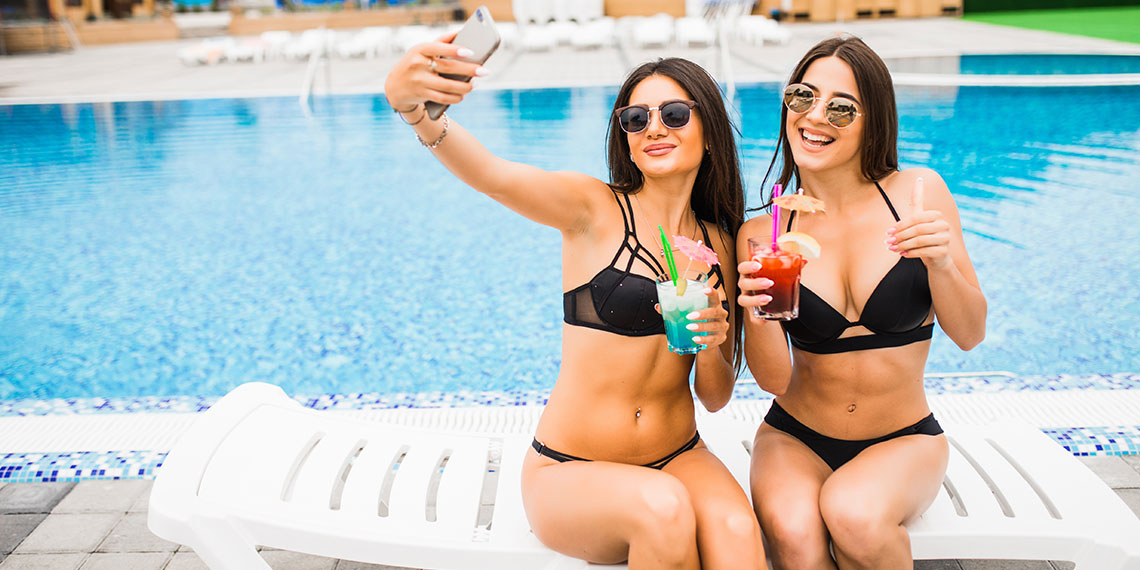 How Much Should Employers Care About Applicants’ Social Media?

It’s 2019, and almost everyone you know is on social media, from my mom who just made an Instagram to my boss whose Facebook friend request has been sitting untouched for the past three years. Even whole companies have large social media presences (hi), and many have made a name for themselves by being the opposite of what’s seen as “professional”, i.e. being snarky to consumers, using explicit language, etc. Lookin’ at you, Wendy’s! So it came as a shock when Emily Clow got publicly shamed by a company she applied to work at for committing the crime of… showing some underboob in a months-old swimsuit picture on her personal Instagram. She found out on that company’s actual Instagram Story, where they’d posted a screenshot of her offending bathing suit pic and admonished, “do not share your social media with a potential employer if this is the kind of content on it.” For the full story, and an interview with Clow, read here.

To be clear, Kickass Masterminds was 100% completely in the wrong, not necessarily for disqualifying an applicant based on their social media photos, but for publicly shaming her using the company’s social media platform. It’s pretty much the height of irony for them to use the company Instagram to target one applicant for “being unprofessional.” It’s the pot calling the kettle unprofessional. Still, this whole story got me thinking about the role of social media in job applications and what’s still seen as unprofessional online.

This girl applied for an internship at a company, and they put up this screenshot of her in a bikini on their company Instagram, publicly telling everybody they wouldn’t hire her because of this photo. pic.twitter.com/aRQF7CqfSF

When I first applied for jobs way back in 2013, I had been hit over the head with the same messaging: don’t post photos of you drinking, doing drugs, or showing cleavage. Put your profile on super-duper private so employers can’t find something that will reflect poorly on you. (That’s actually how I started the Sara F Carter moniker in the first place—I wanted something so dissimilar from my real name that employers would never think to search it. And the rest is history!) It’s not 2013 anymore, though. You can be colloquial on Twitter. You can make a whole career out of posting sexy photos on Instagram. So should we hold the same overcautious standards that we did when social media was in its infancy?

On the one hand, it certainly can’t hurt. Beth Benatti Kennedy, leadership coach, speaker, and author of Career ReCharge: Five Strategies to Boost Resilience and Beat Burnout, still feels it’s better to be safe than sorry. Before posting, she advises there are a few questions to consider: “Does the post or picture represent the brand or reputation you want to have personally and professionally? Why are you posting? Would you be comfortable with a child or teenager viewing it?”

On the other hand, the rules are changing, and not every company expects prospective employees to be totally buttoned-up in their personal life. Lauren Berger, the CEO/Founder of InternQueen.com and CareerQueen.com and author of GET IT TOGETHER, has helped companies hire interns and full-time employees, and she says, “there’s no overarching rule here. Know the company, the company’s culture, and the demands of a specific role.” The best way to do that, she says, is to check out the company’s social media. And, even better, “if you know people who work at the company, chat with them about company culture, dress code, and perspective—and check out their profiles as well.” But if you don’t have a woman on the inside, it’s not a big deal. Berger has a pretty balanced perspective: “If you feel that you should censor your social media a bit, do it. But if there are certain photos that are ‘authentically you’ and display a part of your personality, leave it.”

For the sake of transparency, I’ve had pretty nontraditional jobs, so my opinion on what should or shouldn’t be posted is probably a little more lax than most. I did have one run-in when I applied for a TV internship via Skype interview, and they gently told me afterwards that while they didn’t care, it would be a good idea for me to change my default Skype photo from one where I was smiling and holding up two flasks. Which is pretty chill, considering that, as a 20-year-old, what I was doing was straight-up illegal. If I’d gotten turned down because of that, I would have understood—it was boneheaded and unprofessional (not to mention, against the law). But there’s a big difference between doing something illegal and showing your body on your feed. Without getting too far into the gendered double standards at play, should those things disqualify a candidate equally? Should the latter disqualify you at all?

Becky Bush, who runs the popular website The Typical Twenty Something, which offers career tips and resources, was bewildered by Clow’s story. “Although it’s wild to believe, the reality is that companies are using social media to screen potential employees,” she says. Overall, she urges applicants exercise caution. “Even though you and I think it’s totally acceptable to put party or bikini pictures up on social media, I would be careful when applying to jobs. My main concern during any application process is that I have no idea who is on the other end of the ‘submit’ button.” Such was the case with Clow, who applied to what she thought was a forward-thinking female-run marketing company. Surprise!

But with companies searching out applicants’ social media handles, and sometimes even outright asking for them in the job application (I’ve had this happen numerous times), the line between being forthcoming and shooting yourself in the foot can get blurred. Bush says that there can be situations in which it’s beneficial to share your social handles with a potential employer. “If for some reason Instagram is part of a job or a side hustle you currently have (i.e. you are a blogger, influencer),” she says, “keep it public—you should bring your whole self to work. If the company isn’t into that, they’re not for you!”

Berger echoes, “If the position DOES have to do with social media/marketing, think of your profile as your personal website or an opportunity to show off what creativity you bring to the table and use your own platform to test out different ideas.” But, at the end of the day, “If you don’t feel comfortable sharing your handle, don’t share it. Ideally, you are proud of what you post and put out there to the world (and confident in what you bring to the table—personally and professionally) so in most cases—you’d probably just send it to them.”

That’s because ultimately, you can’t know what an employer is looking or screening for in a social media sweep. According to Berger, there could be a variety of motivations: “they might be looking for a theme or visual story that you’re telling on your own feed. They may assume that if your social is ‘on point,’ you could help them take their platforms to the next level.” Then again, they may be looking to flag “inappropriate photos,” but the problem with that is, “you can’t control other people’s definitions of inappropriate. And sometimes your photos and the executives mindset won’t sync and that’s okay.” (And sometimes, they’ll publicly shame you and you’ll get revenge on them by making them go viral for all the wrong reasons.)

It’s weird how jobs don’t wanna see pictures of you partying on social media. If anything they should be like “wow she blacked out on Sunday and is still at work? Hire her, she’s clearly dedicated”

Finally, there may not even be a shady reason behind wanting to stalk you on IG. “They also could be genuinely looking at your social to learn more about you, to look at your hobbies and what you enjoy outside of the office. Some executives LOVE seeing personality come through on social.” Finding a candidate who fits in with the company culture can be just as important as finding someone who is qualified.

The difficulty with searching applicants’ social media profiles to glean clues about how they will behave professionally probably seems obvious to millennials. As Bush puts it, “so much of social media is not someone’s ‘whole self’ and really doesn’t give an accurate depiction.” While Bush emphasizes, “I personally don’t think anyone should ever judge you for your socials (or anything you do in your spare time really, that doesn’t affect your work),” that’s just not the world we live in. From an employer’s perspective, they want to get to know a candidate as much as possible for extending an offer. So while employers are probably not going to stop creeping on applicants sometime in the future, you can choose to limit your audience. Or you can just say f*ck it and live your life. Berger says, “Some companies are very conservative, not only regarding social media, but in the office as well. Perhaps, if you are outspoken—visually and otherwise—on social media, that’s not the right company for you to work.” At the end of the day, it shouldn’t be a one-way street: you should be evaluating the company just as they are evaluating you. Who knows, you could, as in Clow’s case, dodge a huge bullet.