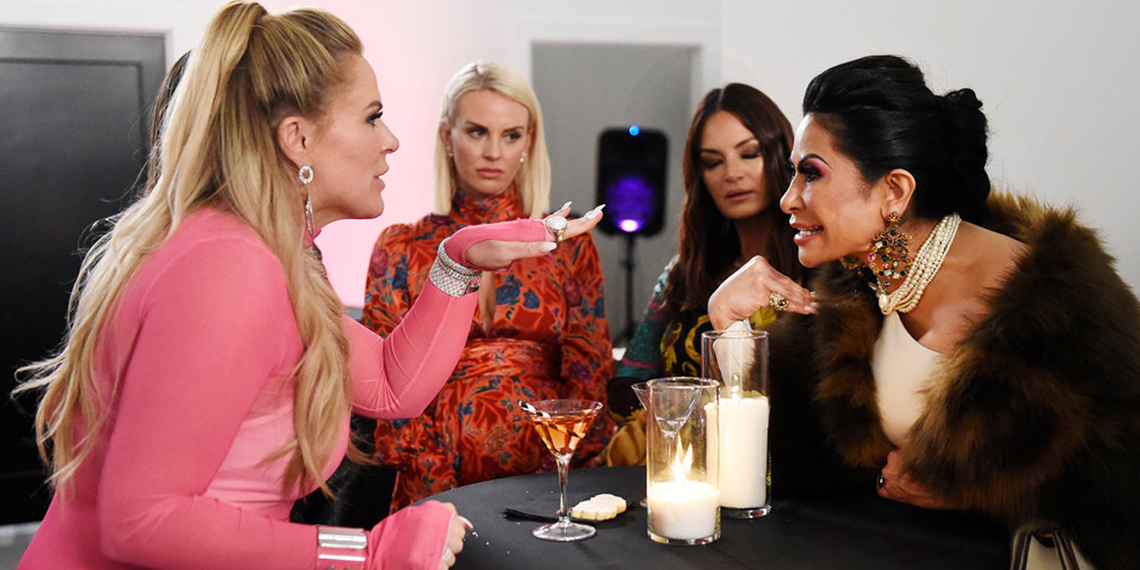 Has ‘RHOSLC’ Lost The Thread?

It started off so promising: a diverse cast, a glittering snowy paradise, a peek into Mormonism, a pastor who f*cked her grandfather. The Real Housewives of Salt Lake City had all the makings of what should have been a captivating first season, but 12 episodes later and I can’t seem to get myself to care much. What happened, and where do we go from here?

Maybe I expected too much from a first season of a Real Housewives show. Even my beloved Potomac had a clunky debut, initially pitched as an etiquette show and then later refashioned into a Real Housewives franchise. The drama that season was petty and low-stakes: Gizelle sitting in the middle of the table at Karen’s party, Ashley having the audacity to dance in public. It took five seasons (and a whole lot of pent-up animosity) for them to get to the explosive season that just concluded.

There were definitely some growing pains on RHOP as Gizelle, Karen, and Robyn—women who had known each other for years—got to know Ashley, and later, Candiace. Remember when Ashley was just some perky 26-year-old who took bourbon shots, much to Karen and Gizelle’s horror? This whole season of Real Housewives of Salt Lake City feels like that: a group of women who don’t know each other well and don’t have an affinity to one another just trying to fake it for the cameras. Heather and Whitney and, until she kept going after them, Jen are really friends, you can tell; so are Lisa and Meredith (though whether they are friends out of a genuine fondness or plain narcissism because they are the same exact person remains to be seen for me). But for a show that opened with a voiceover saying “our friendships define us”, the friendship of the group as a whole feels pretty weak.

There are the warring factions—Lisa and Meredith vs. Heather and Whitney, and everybody vs. Jen—but these independent groups feel loosely held together by virtue of being cast on the same show. Do Lisa and Meredith really care if they remain cool with Heather and Whitney? I don’t get the sense that they do, and still, this remains a conflict for multiple episodes. Plus, rather than sitting there and, as they say in other franchises, working on getting to a good place, many of the women literally walk away from fights: Jen at the prohibition party, Jen at the brunch, Meredith in Vegas, etc. Perhaps this is just a side-effect of all that Mormon conditioning, but 12 hours of television later and it just feels like none of these women really GAF whether or not they talk to their castmates after the cameras stop rolling. If there are no friendships to hold the group together, who really cares if they argue? It’s like watching two strangers get into an argument on the subway, only I don’t have to avert my eyes.

In particular, Lisa and Meredith act too above everything to engage with the rest of the cast. They seem like they would be perfectly content to never branch out of their twosome, except to go on double dates with their husbands. That’s very mature, but unfortunately maturity does not make for good reality TV.

Meredith, in fact, doesn’t really seem to want to be on TV at all. She leaves the room in Vegas when Jen’s behavior starts escalating (at least Lisa follows Jen to try to calm her down/remain on camera). She literally says “I’m not engaging.” Is it because, as she says, she won’t have someone tell her who she can or can’t be friends with, or because she doesn’t want the cameras to catch her cracking?

She also shuts down discussion of her marriage, the one plot point that, I’m sorry, makes her interesting. For all the talk about her marriage problems, they’re basically resolved in two episodes: in episode 7, the worst of it, Seth misses the Park City fashion show; by episode 9, they’re happily back together. From the previous, it seems she will finally talk about it in the finale, but that’s after many episodes of downplaying.

The two cast members who actually do have genuine emotions towards each other are Jen and Mary, and the emotion they palpably feel for one another is hatred. It starts in the very first episode, with “Hospital Smell-Gate” (a feud I still don’t get because it’s a fact. If you just left a hospital, you will likely smell like a hospital. Actually, same with F*cked Her Grandfather-Gate—also a fact). In any case, Mary and Jen’s dislike of one another is so real that they flat-out can’t be in the same room, which is a real shame. In episode 5, during Mary’s attempted brunch reconciliation, she and Jen immediately start arguing. Mary exposes herself when she tells Jen, “I don’t want to talk to you. Ever.” Heather tries to correct her by telling Mary, “you do, you want to talk to her,” but the truth is clear: these women won’t spend time together, good TV or not. Predictably, Jen leaves the brunch early. I’m sorry, but we simply cannot have a show where the only two people who have genuine conflict and bridge the gap between the separate friend groups will not interact with one another. It’s admittedly weird when the two people who are holding this group together, Jen and Mary, are also the most divisive ones. But that could also make for great TV, if utilized correctly.

Speaking of Jen, she seems to have two moods: crying or screaming. At first it was interesting to watch her fly off the handle, at least because nobody else was doing it. Now, it’s gotten predictable, and a little concerning. On top of that, nobody on the cast is capable of holding her accountable or getting a genuine apology (save Lisa at the aforementioned brunch in episode 5), and they all seem tired of trying. Even the hypnotist, despite repeatedly chastising Jen on her improper apology etiquette, can’t elicit a no-strings-attached “I’m sorry” from her. Jen also doesn’t seem to understand how reality TV works, because she won’t forgive and forget. She takes it as a personal affront that Meredith and Lisa forgave Whitney after her apology, saying “I’m not ok with her lying and us throwing everything under the rug,” refusing to realize that apologizing and then sweeping issues under the rug is literally how these shows go on. (Paradoxically, that is a point in her favor that their friendship is real—she is genuinely hurt, and not just for TV.)

The problem is, though, this is The Real Housewives of Salt Lake City, not Everybody Hates Jen. Someone else needs to share the weight, and in order to do that, we need some stakes between everybody else. To her credit, Whitney did try to hold her own by bringing up the rumor of MereLisa saying they’re afraid of Jen to Jen at her husband’s birthday. It was objectively a bad time to bring it up, but Whitney seems to know that this is reality TV, and the worst occasion to bring up an issue in the real world is the single best time to do so to maximize impact. (That or she truly lacks tact, but I’m going with the former guess.) However, while noble, this is a short-term solution, because all Whitney would need to do to fix it is give a simple Ramona Singer-esque apology and admit it was the wrong place, wrong time.

What made RHOSLC so interesting from the beginning was how different it was from other Real Housewives cities, but in order to get back on track, we are going to need to follow the playbook from those other cities, at least for a few pages. The good news is that a solution is both easy and imminent: get these ladies in the same room again! At the reunion, which Mary will attend in its entirety, there can be no storming out or leaving the table when confrontation gets too direct. There can be no FaceTime games of telephone. Like it or not (and I don’t think Meredith or Jen will like it), but they will have to hash it out. And isn’t that what we’re all here for, dammit?