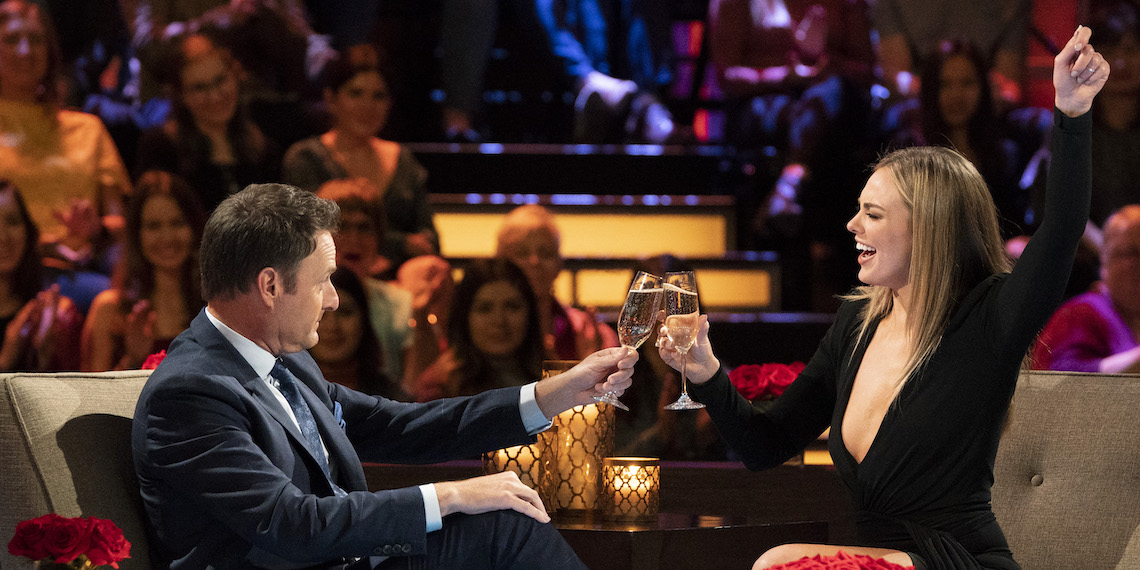 Hannah B. Is The Bachelorette ABC Deserves

As I sit here on this shockingly sunny Wednesday morning, two things are very clear: this hangover might kill me, and Hannah B. is going to make one hell of a Bachelorette. Sure, there’s plenty to complain about, starting with the fact that she’s younger than me (she’s 24; I am…not). I’d rather not see more of Alabama than I have to (or more pageant footage, for that matter), but for f*ck’s sake, half of the final four were some variation of pageant girls from Alabama. And yes, we’ve watched Hannah B. struggle to string together basic sentences, which some might consider a red flag. But I’m here to tell you why this tongue-tied, Southern pageant queen will give us the most fun season we’ve had in years—and why any other choice would have been a huge mistake.

First, let’s take a look at who was in line to be the Bachelorette. In this Variety interview, ABC exec Rob Mills confirms that they spoke to everyone in the final four plus Demi while making their decision. Let’s take Demi out of the equation real quick: that woman was born to be on Paradise, and I’m pretty sure we have no idea what her real voice sounds like. Also, she is deeply and fundamentally not ready to get married, which we should at least still pretend is a prerequisite for being on this show.

So, that leaves Tayshia, Hannah G., and Caelynn—all of whom technically deserve the Bachelorette title more than Hannah B. Going by the rules of Becca’s season, if your leading man deviates from the script and ambushes you for a surprise on-camera breakup, you are supposed to be the next Bachelorette. So both Hannah G. and Tayshia got pretty f*cked there. Actually, it’s kind of a fun game to think about who got a worse deal out of this season. Is it Hannah G., who’s gotten shockingly little screen time for someone who looks like a Barbie come to life, up to and including them cutting her fantasy suite? Or is it Tayshia, the divorced 28-year-old who jumped out of a plane, got dumped on camera, held a sobbing Colton in her arms, and STILL didn’t get chosen as the second-ever non-white Bachelorette? (It’s Tayshia, Tayshia got more f*cked here.)

But here’s the thing. We can all agree the Bachelorette shouldn’t have been Hannah G.—she has a thriving career of “content creating” ahead of her either way, and I think she’s about as ready for marriage as Demi is (f*cking 23-year-olds). Can we all secretly, quietly agree that we didn’t want it to be the qualified and mature Tayshia either? I want many good things to happen for her, and I’m genuinely grateful that her screen time forced Colton to open his mouth for reasons other than kissing. But first of all, the last two Bachelorettes we’ve had have been responsible, grown-up women, and it’s been boring as hell. Second of all, while it’s f*cking disgraceful that there’s only ever been one non-white Bachelorette, ABC needs to do some serious work on itself before they are ready to have another.

The show, in its current state, is barely equipped to handle a Bachelorette of color. Let’s not forget the many “yikes” moments in Rachel’s season where ABC cheerfully broadcast that it has no idea how to address race in a thoughtful way. They (probably purposefully) put a feminist-hating, Black Lives Matter-disparaging bigot on the show as a potential suitor to the first black Bachelorette, and kept him on for weeks, forcing the black contestants to explain to him why his own actions displayed undertones of racism. In my opinion, the change that needs to happen is ABC hiring more people of color and doing a serious overhaul of their many regressive attitudes—not throwing another black woman into a series of semi-racist situations with all of America watching.

Similarly, on the subject of topics ABC is unequipped to handle, Caelynn would also have been a disaster. When Caelynn shared the story of her sexual assault, it was moving, unflinching, and brave. She proved her eloquence, her inner strength, and her ability to be truly vulnerable on camera. But holy sh*t, can you imagine a season of The Bachelorette actually grappling with this? Think about the male contestants they pick. You know at least four of them would have made tone-deaf references to sexual assault before the end of night one. And Caelynn would have had to tell her story and relive that trauma several more times on camera, with different men, who have differing abilities to respond correctly. It would have been painful, sad, and peppered with tactless transitions from Chris Harrison. And let’s not forget that the producers, in all their “careful vetting”, let a convicted sex offender compete on Becca’s season—and he made it pretty far in the process! Caelynn has a valid and important story to tell, but I’m glad we’re not seeing it on The Bachelorette.

So, is my final point that Hannah B. is the perfect choice because she’s young, white, and trauma-free? While I don’t love the look of that sentence, that kind of is my argument. Rachel and Becca K., like I said, are smart, confident, gainfully employed women who know what they want. One of them wound up with her second choice, and the other with a MAGA troll—not exactly the empowering message we hoped they’d send. So maybe, at least for this season, we can stop pretending that The Bachelorette has the capacity to be an empowering show. I don’t care if Hannah B. has the vocabulary of a fourth-grader and has never felt real pain. The Bachelorette is terrible at portraying eloquent women and their trauma in a watchable way anyway.

Hannah B., with her terrifying smile and big shiny eyes, was exactly the same person when she got sent home as she was when she arrived. While all the other girls slowly crumbled and dropped their facades, Hannah B. didn’t flinch. ABC doesn’t need or want an accomplished, mature woman as their Bachelorette. They need a marionette doll who can watch this guy rap without gagging. There will be no opportunity to get upset on this season of The Bachelorette—I’m sure whoever Hannah B. ends up with will be a great first husband. Until ABC is ready to make The Bachelorette a show that can handle serious issues without embarrassing everyone involved, bring on the Hannah B. Roll tide!