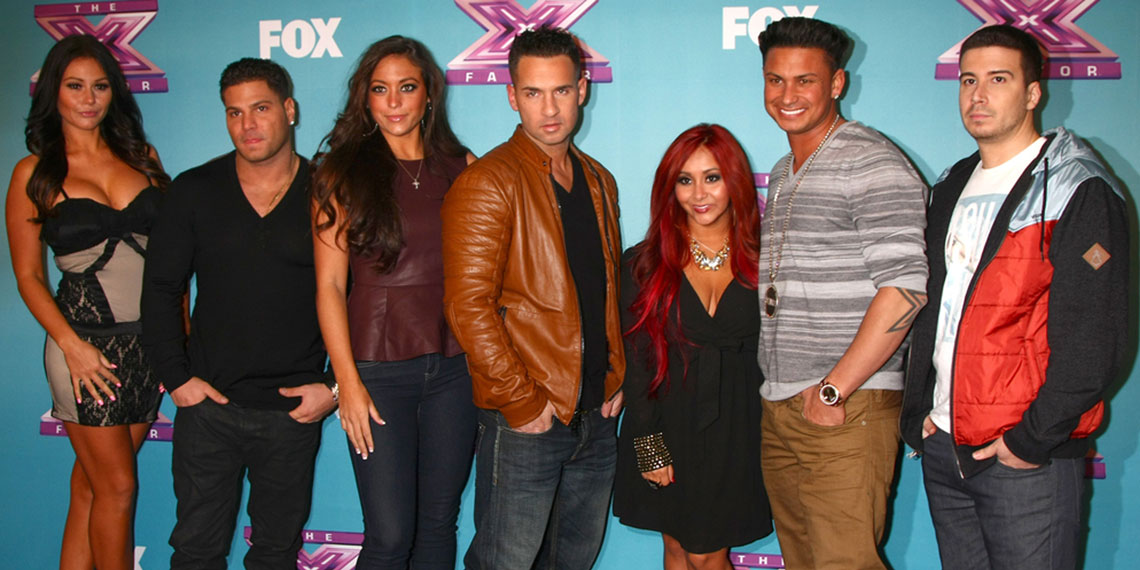 The day we have all been waiting for has finally arrived! He is risen! And by he, I mean The Situation because today officially marks the reboot of beloved reality TV show, Jersey Shore. Somehow, MTV convinced seven of the Jersey Shore cast members to come back for a season of debauchery that’s sure to ruin their relationships, their vital organs, and most likely, their real lives. What, DJ’ing at pool parties in Atlantic City not paying the bills anymore, Pauly D? Whatever the sad reason is they agreed to do this, it’s great news for us because we get to see our favorite group of morons bring shame on their families and my beautiful state of New Jersey yet again.

So, in anticipation of tonight’s episode, I wanted to do a roundup of best moments on the show. But I thought the word “best” doesn’t really quite go with this group unless you’re saying like “best at getting caught for tax evasion,” or “best at packing all their belongings in a garbage bag.” I wanted to do a round up that felt a little more authentic. And what better moment to base this roundup on then the iconic moment in season one when Snooki gets punched in the face?

Now, I definitely don’t think Snooki deserved to get punched in the face and I’m not here to promote violence against women, so leave me alone in the comments you sensitive bitches, all right? But I am here to say that all the roommates had a lifetime moment when I wanted to punch them in the face. So make yourself a batch of Ron-Ron Juice *not a euphemism for his semen* and settle in folks, because I’m about to round up each Jersey Shore cast member’s most punchable moment from the original Jersey Shore.

Let’s start out with Ronnie, since he was probably never picked first for anything in his life except in a police lineup. Ronnie deserved a punch in the face (and got one), for how he treated Sammi most of the time, but you all know his most punchable moment well. In season 3, after Sammi goes to the club and dances with other dudes to make Ron jealous, he starts throwing all her stuff outside including her mattress, all the while they are threatening each other. Not only does Ronnie seem like he’s going to attack Sammi, but he also starts screaming “You never cooked for me!!” Whoa whoa whoa Ron, this is the 90’s. It’s civil rights. If that were the criteria for being a girlfriend, I’d have slept on way more mattresses outside. Basically, it’s no surprise that Sammi turned down this new season—it probably took years of therapy to get her mind right after the way this chauvinistic meat head treated her.

As I mentioned, Snooki does actually get punched in the fourth episode of the series by a teacher from New York. Children are the future, folks—so glad we entrust their sensitive development to people like this. While no woman deserves to be punched by a dude in a bar, Snooki sure was testing my patience when the series started. She wasn’t always the lovable meatball who can’t find the beach right in front of her. When Snooki first got to the house, she came on way too strong. Like, stronger than the Axe body spray polluting the air in that house. Snooki took enough tequila shots to tranquilize a small horse and then proceeded to dry hump anything in the house with a pulse. So I guess I didn’t want to punch her so much as call her mom. Lucky for Snooki, the group finally warmed up to her, she didn’t have to leave the house, and the world was never deprived of this self-proclaimed “good person”.

The most punchable thing about Jenni is her nickname, tbh. Why so many w’s? Your Starbucks barista is never getting that right. But, since I have to pick a moment I wanted to punch her, I have to mention the time Jenni pees behind the bar in Karma. As someone who spends the majority of my time in a city that reeks of urine, this moment is very triggering for me. Must the entire world be our bathroom? Actual bathrooms exist! Tell your friends!

If JWoww has the most punchable name, then The Situation has the most punchable face. And I mean that in the nicest way possible. Like, I think a punch and the resulting reconstructive surgery might help him out a lot. Anyway, Mike was always stirring up shit in the house, so it’s hard to pick his worst moment. I wanted to punch him when he was trying to hook up with Snooki in Italy, I wanted to punch him when he tells Jionni he did hook up with Snooki, and he clearly wanted to punch himself that time he head-butted the wall. Thanks for saving me the work, Mike!

I mostly like Pauly D, as much as one can like a dude with a gelled blowout and unintelligible accent, but he really did women wrong on this show. I especially felt for the woman he dubbed his “Israeli Stalker” in the first season. So she bought you a T-shirt and called your house a few times, and showed up at the club? POOR PAULY. If that’s stalking, put me in jail right now and take my “recent calls” log in my phone for evidence. At least it will get me out of work for the day, and maybe I can get a hot cop’s number to call 95 times.

MTV has been airing a lot of specials leading up to this new season of Jersey Shore, and I have to admit, Vinny is looking good. Is this embarrassing? Should I have kept this information between myself and my diary? Please disregard. Vinny’s worst moment on the show comes early when he sleeps with the boss/landlord’s girlfriend in season one. Vinny! Everyone knows you don’t shit where you eat. You deserve a punch for being so stupid. Vinny goes to work terrified he’s getting evicted, but Danny just gives him a warning. Clearly Danny’s girlfriend doesn’t cook for him either, because he should be wayyyyy more pissed.

Yes, I did say the sweetest bitch you’ll ever meet is not returning this time around, but I couldn’t write this roundup without throwing a little “Ron STAHHHHP” at you.

And there you have it! I didn’t include Deena on this roundup because she wasn’t an original Jersey Shore cast member—if you’re dying to know her worst moments, feel free to slave over the Wikipedia page like I just did. All I can say is I hope the moments I mentioned here pale in comparison to how much I want to punch them all tonight. Cabs are here!