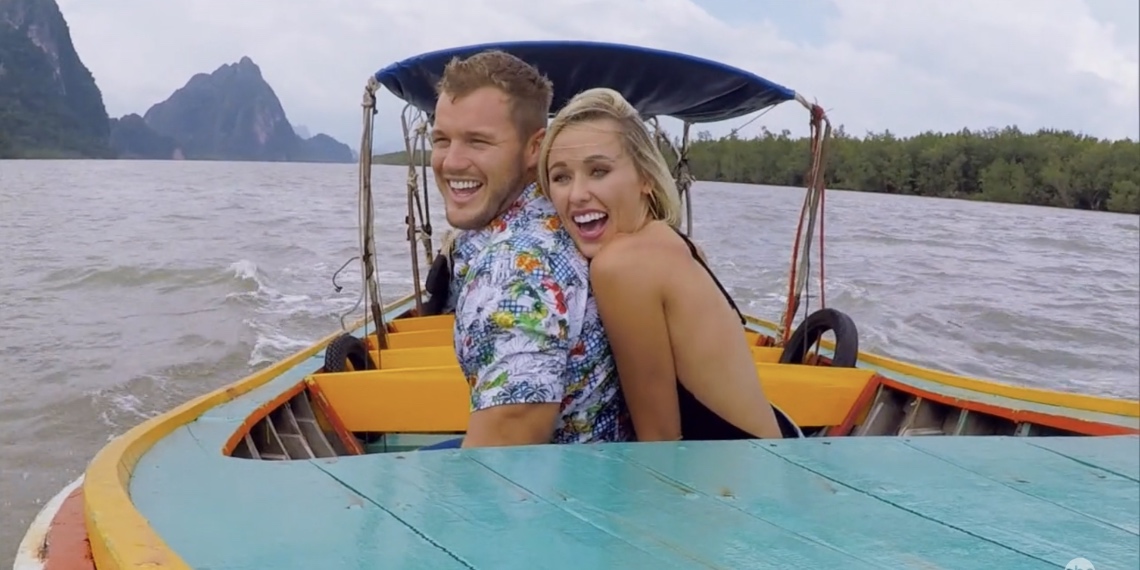 Diggy Moreland’s ‘Bachelor’ Recap: Only Way To Leave Miami Is To Be Kicked Out

Week FIVE! Week FIVE, Week FIVE!!!! I’m solely excited because if my math is correct, I believe that we’re closer to the end of the season than we are the beginning. I’m not actually sure that’s the case, but it for sure makes these Mondays easier to digest thinking that Colton’s season is over soon. Okay, let’s see how annoying this Monday’s events were.

Monday’s episode kicks off with the girls leaving Singapore (no doubt in my mind they got kicked out the country for extreme boredom) and heading to Thailand, which, due to the cheap dates on this season, I wouldn’t be surprised if they took the Megabus. After settling in the new country, a date card shows up and it presents our “Never Been Kissed” friend Heather (who will be referred to as “NBK” from here on out) with a one-on-one date. Dressed in a shirt that could only be made by Waze or Google Maps, Colton and Heather take a boat tour looking at cliffs and water. I’ll spare you the cliffhanger, this is as exciting as this date gets.

Back at the Thailand Holiday Inn Express, Elyse starts to wonder why she doesn’t get a one-on-one every time, and all the girls look at her like she’s crazy. Newsflash Elyse: You signed up for The Bachelor. Quick synopsis of how this show works: 30 girls makeout with the same guy for 2 months, and the girl with the least chapped lips at the end wins. If you want something that’s cut and dry, the show “Deal or No Deal” has your name written all over it.

Continuing on their date, we see the two lamest people look at each other’s lips, realizing that they have zero experience with using them outside of blowing out candles. When I tell you this date was bad to watch, it was at the point that I started to envy every blind person. ABC continues to play up the “Will She Lose Her Kissing Virginity?” and at this point, we don’t know if she will or not. They then go to dinner and Heather talks about how at one point she was ready to kiss someone but wasn’t sure if he was the right one. Heather is definitely that woman at Whole Foods that touches all 400 available bananas and then comes back the next day to see the next shipment.

Heather: “I’ve wanted to kiss someone, but I didn’t know if they were the person for me.”

Heather, you’re just kissing someone, not co-signing a mortgage for them.#theBachelor

Moving the awkwardness to the beach, ABC throws the biggest “hurry the f*ck up” signal by launching fireworks into the sky, and Colton then takes Heather’s kissing virginity. If this is the direction the franchise is moving, can we at least move this show to Nick @ Nite?

Elyse is back at the hotel getting dressed in her makeshift Tinkerbell costume from college, knowing that she needs to talk to Colton the minute he gets back. She walks to his villa in a country where she’s never been before wearing heels—that in itself signifies that this girl gives ZERO f*cks. She then goes on about how she wants to take things slow and she wants to know the stupid silly things Colton does, like tucking his pants in his socks. She then realizes this show isn’t for her and quickly walks into the darkness off the set of The Bachelor. The best things about going home in that dress? TSA can see right through it, so she won’t have to empty her pockets.

The next group date (Tayshia, Kirpa, Caelyyn, Hannah B, Demi, Sydney, Hannah G., Kate, Nicole, Onyeka) takes place where Destiny’s Child filmed the “Survivor” video. Yes, they are in the JUNGLE. They have a tour guide that shows them around, and he talks about how he survived in the jungle his whole life. After lessons from the Boy Scout-Thailand division on how not to die, the girls are split up into teams to find and create their own survival kit. Tayshia creatively devises time to get alone time for her and Colton, while Demi and her team bring back Champagne and burgers. It’s worth mentioning that Postmates can deliver to the middle of the jungle in Thailand, but can’t get to the second floor of my condo building…

We get to the night portion of the date, and things start to heat up. (Not really hot though, so don’t get your hopes up.) Onyeka tells Colton that before Elyse left, she mentioned to her that Nicole was only there to try to “get out of Miami.” Says who?? That right there is a lie. If you’ve ever been to Miami, you know that you get KICKED out of Miami, you don’t just leave. The amount of targets that Onyeka now has on her has left the retail chain looking at her as their new spokesperson. Colton asks Nicole about this rumor, and she lets him know that she signed a 2-year lease and she can’t leave. Tayshia backs up Nicole’s story, and Onyeka realizes that she messed up, especially since Nicole was her ride home from the airport after filming. Hannah B. gets the group date rose, and the only thing we’re left wondering is what Nicole is going to use Onyeka’s hair on fire.

That’s a lie!! I’ve been to Miami…..aint NOBODY trying to leave. #theBachelor

By process of elimination, Cassie has the one-on-one date, and she’s beyond giddy. Following the boat theme, they go out on the sea and end up on this private island that is the size of a vanilla wafer.  They end up making out non-stop and there’s not much else. Oh but wait! Colton fumbles a lot of things like footballs and conversations….but what he didn’t fumble is that BOOTY grab that Cassie enjoyed. The island date isn’t much more than her asking production for more Burt’s Bees because Colton sucked it all off.

Later in the night, Colton and Cassie continue to vibe, and you can tell they have that AP Chemistry. Cassie opens up about how being on the show is making her life now open to the public and extremely vulnerable. Well Cassie, if you told your mom you were going to audition to be on Jeopardy!, she gonna be UPSET when she finds out the truth. They then have a nightcap in Colton’s bed, which STILL could be on ABC Family because no skin was shown.

Cocktail Party time hints that maybe we finally get some drama. Nicole gets one last chance to plead her case with Colton to reassure him, and in the midst she tries to pull Onyeka under the bus with her, stating that Onyeka threatened her several times. In an argument between Nicole and Onyeka that can only be rivaled by sibling girls in a house with one bathroom, these girls argue so loud that it interrupts Colton’s other dates and causes him stress. Yes, the man who hasn’t had sex is NOW finally stressed out. We end the episode with Colton walking out on the two arguing, and him realizing that he has to throw out yet another box of expired condoms. Talk about stressful.

All I know is that both these girls need to go home. On Spirit Airlines. In a middle seat.