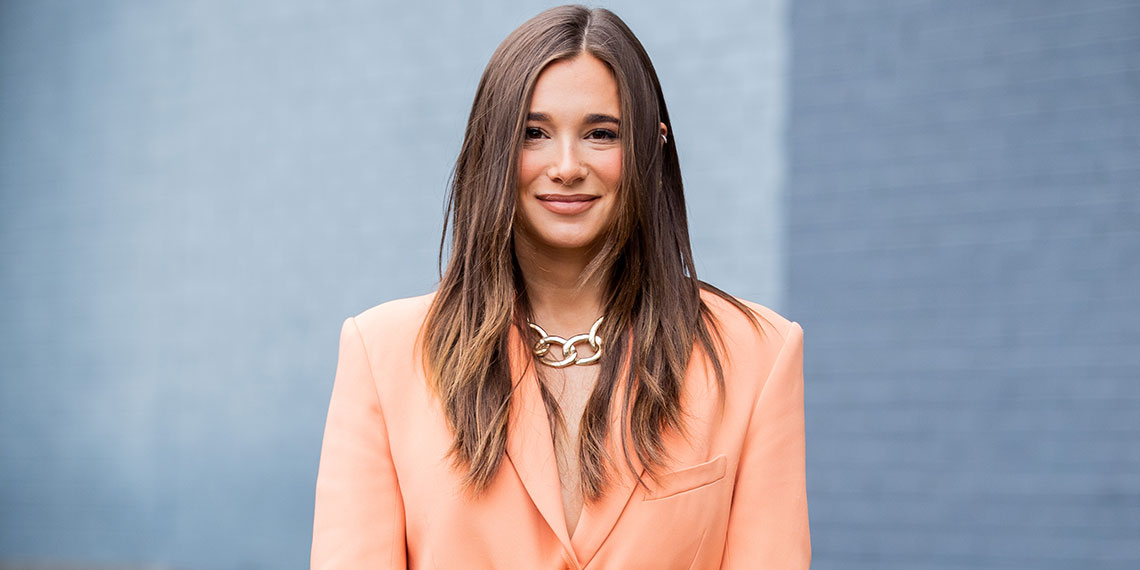 2020 has been a year of unpredictability, but one constant theme throughout has been Danielle Bernstein, creator of WeWoreWhat, being accused of copying from independent creators. The other, related constant has been Bernstein vehemently denying all claims of stealing designs. While usually we’ve seen these scenarios play out in the form of social media controversy, they are now headed to the courtroom, because Bernstein recently filed a claim against The Great Eros, a Williamsburg intimates brand that accused her over the summer of stealing their design.

In case you can’t keep up with all the accusations, back in early August, The Great Eros, a small business, said that Bernstein copied their designs. The design in question is a pattern that consists of sketches of nude women, which Bernstein used on WeWoreWhat swimwear, among other items, and which Eros says they initially created to be used on their tissue paper. When the theft accusations arose, Bernstein called them “false and unwarranted”. Great Eros sent WeWoreWhat a cease and desist letter in August demanding it stop using the designs.

Now, in a newly filed complaint, WeWoreWhat LLC and Onia LLC are suing Great Eros, seeking a judgment that the WeWoreWhat designs do not infringe upon Great Eros’ copyright. This was apparently made in response to Great Eros making “an actual threat to file a district court litigation later this week,” according to the filing. In an Instagram story on Saturday, Bernstein explained, “A few days ago their attorney contacted us, sharing a lawsuit he intended to file this week in an attempt to push us to settle a meritless claim that we now, begrudgingly, have to fight.”

In the suit, Bernstein claims the silhouettes were inspired by “the generally ubiquitous concept of silhouette drawings of the human form” as well as line drawings by Henri Matisse. The suit also states that WWW “did not copy, use, or reproduce any artwork belonging to The Great Eros, nor did anyone at WWW or associated with WWW ever purchase product from The Great Eros or receive product wrapped in the tissue paper.”

The owners of Great Eros told Page Six in August that they believe Bernstein was introduced to their brand by a press agent. A screenshot of what appears to be a gifting request posted by Diet Prada has WeWoreWhat on a list of recipients, presumably for product. Another screenshot posted by Diet Prada shows a purchase order from someone with an onia.com email address (Onia is the lifestyle brand Bernstein collaborated with for her swimwear line).

Danielle Bernstein aka @weworewhat has been pretty quiet since recovering from COVID, but it seems she’s been busy with some other tasks… namely filing lawsuits against small companies. @thegreateros, a 4-year-old Brooklyn-based lingerie brand and shop, has just announced they’re being sued by Bernstein and her manufacturing partner @onia. ⠀⠀⠀⠀⠀⠀⠀⠀⠀ In August, The Great Eros accused Bernstein of copying the signature nude print from their packaging and applying it to items from her @shopweworewhat line including swimwear, scarves, and even wallpaper. After sending a cease and desist to WWW on August 10th, TGE was met with the surprise lawsuit on October 15th, after Jeff Gluck, counsel for TGE, claims were some veiled settlement talks. ⠀⠀⠀⠀⠀⠀⠀⠀⠀ After denying their initial claims and any possible connection with their brand, Bernstein and Onia’s declaratory judgement lawsuit is still seeking the court to affirm that their print does not infringe on The Great Eros’ copyright, namely in that it was “inspired by the generally ubiquitous concept of silhouette drawings of the human form.” ⠀⠀⠀⠀⠀⠀⠀⠀⠀ TGE however, claims they have receipts proving Bernstein and Onia’s connection to the brand. Receipts provided to us show an alleged gifting request from Bernstein after showroom visit on August 23rd, 2018 and a web order from an Onia founder on August 15. ⠀⠀⠀⠀⠀⠀⠀⠀⠀ In a series of Instagram stories, TGE, now defendants, responded to the lawsuit. “…Danielle is taking us for everything we own over a design that she allegedly stole from us and is now suing us to bully us into submission,” the post read. “Know you didn’t just sue us with this lawsuit, you sued every small independent designer, business owner and artist…” • #thegreateros #brooklyndesigner #Brooklyn #weworewhat #designer #onia #swimwear #designerbathingsuit #bathingsuit #swimwear #print #illustration #linedrawing #figuredrawing #femaleform #figure #silhouette #bikini #lingerie #shoplocal #shopsmall #giftwrap #lawsuit #model #ootd #wiwt #dietprada

In a series of Instagram stories on Friday, the Great Eros wrote that Bernstein is “taking us for everything we own over a design that she allegedly stole from us and is now suing us to bully us into submission.” The brand vowed to “fight back against and oppression” and wrote, “We will be relentless in our pursuit for justice against you.”

A representative for Bernstein did not immediately respond to request for comment from Betches. However, in a series of Instagram stories over the weekend, Bernstein clarified that she is not seeking compensation from the suit. She wrote, “I want to clarify that I am ABSOLUTELY NOT seeking financial gain, what we are doing is simply asking the courts to confirm that we did not infringe on an alleged copyright.” She also asserted that she is a “committed supporter of small businesses” and that she respects “creative liberty and ownership”.

The spat with the Great Eros is not the first time Bernstein was accused of pilfering the designs of a small business. In July, a firestorm erupted when Second Wind, a Latina-owned small business, shared a DM conversation that seemed to indicate Bernstein asked for a sample of their patent-pending mask, which came with a chain attached, only to then produce her own line of masks with a similar-looking chain. Bernstein, however, insisted that her team had designed and ordered the masks months before hearing of Second Wind, a claim she followed up with screenshots of emails indicating as such. She also called the copying claims “false”. As a result of the backlash, Bernstein pulled the masks and donated them to charity.

Also in July, Bernstein landed in hot water after being accused (yet again) of ripping off an Australian Etsy shop owner’s shorts. After an initial announcement in which Bernstein wrote she found “vintage gym shorts from the 90s” and was “already remaking them for my brand”, she later backtracked, claiming a mix-up had occurred. “These are from Etsy and I totally thought they were vintage but they are made to order,” she later clarified. “Someone on my team ordered them for me a while back. I will not be making them.”

In May 2018, accusations that Bernstein’s forthcoming jewelry line in collaboration with Lulu DK and sold at Nordstrom contained pieces that were knocked off from Foundrae, a fine jewelry line that Bernstein had worn in the past, caused such a sh*tstorm that Bernstein pulled a few of the pieces in the collection ahead of its launch. (The remainder of the collection still launched as planned.) She said the jewelry was inspired by “a vintage locket that she purchased at a flea market”. She called the “vicious online campaign” against her “devastating”.

It’s been a rough year for Bernstein, who revealed in early September of this year that she had tested positive for COVID-19. She recovered in her NYC apartment, where she described on IG story feeling like “I have the flu, my body is extremely achy and I still can’t taste or smell.” When called out for repeatedly partying in the Hamptons, Bernstein retorted that she wore a mask, followed CDC guidelines, and “lived life in phase four reopening of NY.” However, she did admit, “of course I could have been more careful.”