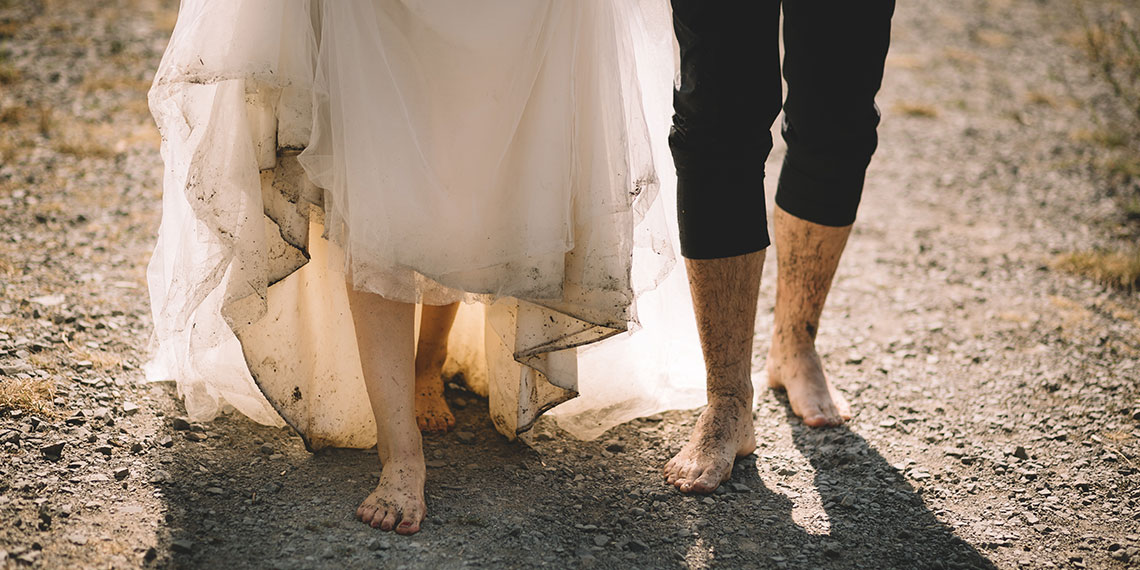 Crazy Wedding Story Of The Week: A White Trash Triathlon

Being in quarantine means we have lots of time to read about things going wrong while we’re sitting inside, in our daytime pajamas, living through a sort of dystopian hellscape. Yes, I’m mostly referring to reading the news, but I’m also talking about crazy wedding stories. Remember a time when things other than our country/ecomony/healthcare system were falling apart? Good times. For real, we feel super horrible for any bride who’s had to cancel or even postpone her big day because of COVID-19. But, to find a little silver lining, at least you could cancel your big day and not end up as a crazy wedding story submission on our site. Even the ‘rona can’t take away entitled, outrageous, or ill-equipped brides, and for that, we are thankful.

Which brings us to today’s story, submitted to us by a reader at [email protected]. It’s a sordid tale of love, wood chips, goose sh*t, and people drunk on jungle juice. Sounds like a frat party—but unfortunately for all who witnessed this unholy matrimony, it’s not.

“This was my best friend’s wedding. I get asked to be a bridesmaid. I tell her to take her time planning the wedding and not to rush, but she decides to rush anyway, despite not having any money.

A week before the wedding, bride finally decides to visit the outdoor ceremony venue, knowing months prior that there would also be a fair starting on that same street an hour after, so people could be setting up early, and parking would be hard to find. She said she was going barefoot in a park, near water, where geese frequent. She has a full-on meltdown about how she’s screwed, even though she should have known, having been to this park many times throughout her life, knowing it’s near water, etc. Her parents, meanwhile, were planning to flatten their backyard for the tented reception, and never got any responses, so never pursued it further, and didn’t get the ground flattened, therefore a tent couldn’t go up. At this point, one week out, they have no ceremony or reception venue. The neighbours then decide to save the day, and suggest the ceremony be on their front lawn, and the tent can go on their back lawn, which is flattened and all gravel. The bride also originally planned on having no dance floor, so people could just ‘dance with bare feet on the grass’.”

BUT, despite rushing, a bride going to visit her venue only ONE WEEK before a wedding is absolutely f*cking insane. I must have visited my venue five or six times in the year that we planned our wedding. This makes me think that there was no actual “venue” planned and the bride was planning to just roll up to the park with an entire wedding reception in tow.

And then to have to rely on neighbors to save the day with a backyard gravel reception? This is shaping up to be a whole disaster. I am a little sad that the reception didn’t actually take place in the park where people would have been slipping and falling because of goose sh*t. Darn.

Naturally, things are only going to get worse from the rushed backyard planning debacle.

“Now, it’s 3 days out, with forecasted rain for the wedding day and two days prior, with no back-up for the ceremony or cocktail hour. The ground is a mud pit, so while the bride goes to get her nails done, I help her father, who was planning to SINGLE-HANDEDLY shovel 2 truckloads of wood chips and spread them within the tented area. Now, they’re worried about splinters, so her father, the male neighbour and I build a dance floor out of scrap wood (which was actually very structurally sound, surprisingly). At this point, I was getting 3-4 hours of sleep per night, while the husband-to-be didn’t even know what time the wedding started at until the day prior.”

First off, jazz snaps for the groom-to-be not knowing what time his own wedding was starting. I think, you’ll find, that most grooms are in the same boat with that one. Also, of COURSE the gravel pit would fill with water and mud. Sounds like a good time and right up the alley for a bride who wanted to dance barefoot in the grass. I mean, let’s just dance barefoot in the mud at that point. It sounds GREAT.

Also, is this submitter a guy or a really strong betch? Like, I wouldn’t be caught dead shoveling f*cking wood chips or building a dance floor out of scrap wood. What the f*ck am I? A lumberjack? I have a communications degree, which makes me 100% useless at anything involving the outdoors (except drinking on towels).

Did you think things would improve from here? Like the clusterf*ck that is the current state of our country, this wedding only gets worse.

“The wedding day arrives. It’s still raining slightly, still have no back-up plans, I’m running around like crazy trying to help. It stops raining right before the ceremony, the bride is yelling at her controlling aunt who was trying to tell people when to walk down the aisle (incorrectly), and they get married. I help run cocktail hour, which involved pouring bottles of vodka in with Hawaiian Punch and iced tea, while the other bridesmaids drank. As the reception starts, the now-husband walks into the tent with the bride trailing behind, which makes for an awkward moment for everyone.”

There are way too many wrongs here for me to even comment on half of them, but can we all take a moment to appreciate the mixture of Hawaiian Punch and vodka being served during cocktail hour? Like, between that, the handmade dance floor, and a mud pit, this is shaping up to be a white trash triathlon. God bless America! Although, judging by the extra “u’s” in some of these words, I’m guessing this wedding took place somewhere fancy, like Canada or England. Good to know they can be just as trashy as us!

A Reception To Remember

Yikes. As you can imagine, the reception isn’t really any better than the wedding.

“Night goes on, the step-father to the groom keeps making shots, citing his previous youth experience of being a bartender. At some point, my boyfriend disappears, and I assume it’s to go to the bathroom, because they only brought 2 porta-potties for the 100 guest wedding, which were very small. One of the bridesmaids and her boyfriend have started fighting, after having drank all night, and it gets physical. She punches him in the face, he tries to stop her, she rips his shirt, and my boyfriend (who weighs probably 40lbs less than either of them) tries to keep the peace. The bride eventually finds out through the grapevine, and leaves for the night, also yelling and mad.”

Is a wedding even a wedding without a fist fight? I don’t know what to feel, except that, my God, I wish I’d been there. Also, only having two Port-a-Potties at a wedding where you’re serving actual jungle juice sounds like a recipe for someone (me) throwing up in some bushes.

If nothing else, we give jazz snaps to the submitter of this story. It made us all forget about quarantine for a hot sec, and, hopefully, made some of you postponed wedding kids feel a little better for a few minutes. Kisses.