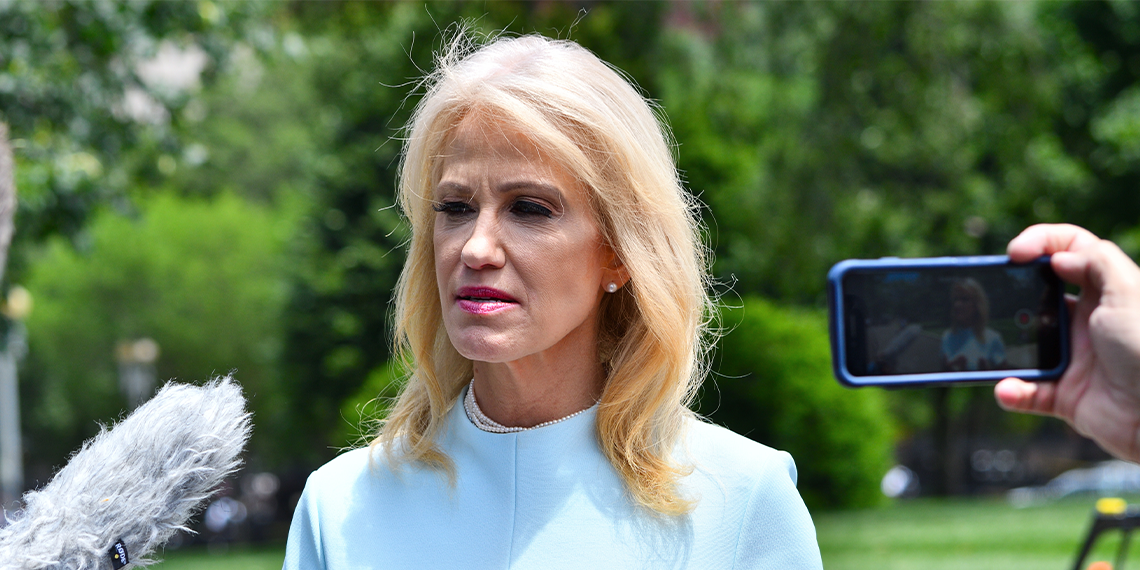 Claudia Conway has entered the chat.

The Conway family is well known for their political division, with Kellyanne serving as a senior counsel to the president and her husband, George III serving as an advisor to the anti-Trump Lincoln Project and constantly tweeting that the president is unfit for office. Basically, they’re like the Romeo and Juliet of American politics. Their star crossed love story aside, at the end of the day, both are registered as Republicans.

Typically, when the Conways are in the news, it tends to be because George III responded to something horrible that the White House did and is directly opposing his wife. However, this time, a new family member is at the center of focus.

Claudia Conway, the 15-year-old daughter of Kellyanne and George has been going viral with her Tik Tok activity. To be VERY CLEAR, I didn’t have it on my 2020 bingo card, but looks like I am Claudia Conway’s newest fan.

Like many other members of gen-z who are too young to vote in 2020, Claudia is using Tik Tok to advocate for the causes she believes in and help mobilize older Tik Tok users to vote. Many of Claudia’s Tik Toks feature her advocating for the BLM movement, speaking up against toxic masculinity, actively advocating against Trump, and supporting Black content creators.

She also uses Instagram as a platform for activism. She has shared several posts advocating for mental health awareness, the BLM movement, and taking precautionary safety measures seriously in the pandemic. Here she is lipsyncing over a sound questioning why pro-life people who consider abortion murder to fail to raise the alarm when Black Americans are killed in public. And here, she mocks Trump fans who can’t handle being criticized for supporting a dictatorial white supremacist (ok, our words.)

As her social media accounts have grown more and more popular over the last day, she has made her message to both supporters and haters very clear: it is important to educate yourself and speak truth to power.

“when the power of love overcomes the love of power, the world will know peace.” — jimi hendrix to the black community, YOU matter. all black lives matter. black women. black men. black LGTBQIA+. you all matter. keep fighting. this isn’t over yet. to non-black people, like myself, we must use our privilege for good. we MUST be allies. we must listen. we must educate ourselves. we ALL must advocate. this isn’t a matter of bipartisan politics. we all must check our bias at the door. we must check our political affiliations at the door. this is a human rights movement. we must come together. we will not stop speaking out until an end is put to this. let’s end systemic racism and destroy the agenda of institutional racism. let’s get on the RIGHT side of history. 🖤✊🏽✊🏿✊🏾 #blacklivesmatter #juneteenth

Not only is Claudia a great example of how younger people are using the app to participate in a political system that they are not yet old enough to formally contribute to, but she is totally badass for sharing her opinions. She has explained, several times, that even though her parents are famous conservative politicians she still works hard to form her own, educated opinions, even if they contradict that of her parents. She also has been very clear that just because they differ in opinions does not mean they love each other any less. I know how draining it can be to have a ~spirited conversation~ over tough issues with loved ones who disagree with you, and I literally couldn’t imagine being in Claudia’s shoes.

Claudia is only one of many gen-z Tik Tokers who are using the platform for advocacy and to troll Trump. Over the last month, advocacy on Tik Tok has skyrocketed. Creators are making catchy songs to explain systemic racism, to expose injustices in the political system, and explain the importance of registering to vote. Between tricking Trump’s campaign store to thinking that they’re out of merch to flooding a meet and greet raffle with fake submissions, younger Americans are doing everything in their power to make sure the president doesn’t have four more years in office.

For five-minute daily updates to help you laugh instead of cry about the news, subscribe to the Sup daily newsletter.