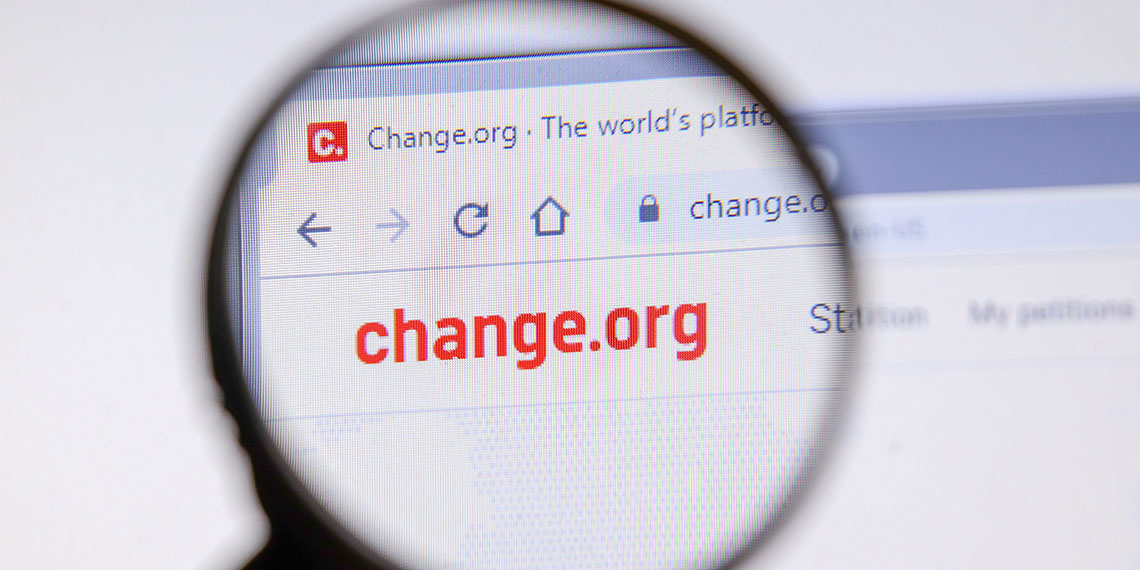 People Are Asking Questions About Change.Org

There are many ways to continue to support anti-racist work, one suggestion being to sign petitions. These petitions have a variety of functions: some aim to raise awareness of and bring justice for victims of police brutality, such as demanding that all of Breonna Taylor’s killers get fired and charged; some urge city leaders to remove Christopher Columbus statues. But if you’re finding these petitions via social media, then they all probably have something in common: they are hosted on Change.Org.

With Change.Org petitions demanding justice for George Floyd, Breonna Taylor, Oluwatoyin “Toyin” Salau, Rashard Brooks, and the countless other lives lost to police violence flooding everyone’s social media feeds, it’s easy to assume that Change.Org is one of the companies supporting BLM. But it isn’t as clear cut as it seems, and as the recent confusion between the Black Lives Matter Foundation and Black Lives Matter Global Network proved, before you give your time or money to an organization, it’s necessary to do a little digging to ensure it really backs the causes you intend to support.

Here’s some background: Change was founded in 2007 to connect individuals to causes and advocacy actions that they care about. In the early operating stages, Change promoted mostly progressive causes but didn’t have any petitions. It wasn’t until 2010 that the company started to host petitions and became a for-profit organization.

Ok, sit tight because here is where this gets really technical. Change.Org is a certified B corporation, which means that they are responsible for both making a profit and for their social and political impact. Everyone’s favorite ice cream company, Ben and Jerry’s, is another B Corporation. Ben and Jerry’s has a long history of making their political and social commitments public and participating in advocacy, such as with their now-famous Black Lives Matter statement.

While the prompt never directly stated that the collected funds would go to grassroots organizers or the subject of the petitions, the message that giving money will put the petition “on the agenda” gave the impression that giving $3 would help the petition go somewhere that would inspire direct action. I, personally, have made the mistake of donating to Change petitions after signing them under the assumption that my donation would go to the cause I support.

In reality, donations made on Change.Org’s petitions are used to pay operation costs and cover marketing campaigns that promote petitions internally and promote the platform as a whole. Over the years, articles and Twitter threads have raised concerns about Change.Org’s unclear donation prompts. However, with petitions calling for justice for the victims of police brutality, criminal justice reforms, and demanding change in race relations going viral, past and present employees are now taking Change.org to task.

An open letter signed by 130 current and former employees on Medium is calling attention to the way that Change.Org handles donations, specifically citing donations made through the Justice for George Floyd petition. The letter states:

The petition calls for signers to “become a hero” by “chipping in,” but these donations do not go to George Floyd’s family, or to organizations fighting for Black lives. Rather, these contributions serve to market the petition and Change.org itself via billboards and digital ads. Change.org is siphoning resources away from organizations that are accountable to Black people and equipped to do deeper, long-term, community-based organizing for Black lives and liberation. At the same time, Change.org continues to host numerous petitions advocating against racial justice, and leaders of color — including multiple petitions calling for Black Lives Matter to be labeled a terrorist group — and generates revenue from those as well.

We verified such petitions exist but decline to link them for you here.

The letter also explains that part of Change.Org’s business model involves the company making money by collecting more emails. With petitions involving racial justice hitting record levels of engagement, those who signed the letter have expressed their frustration and anger with the company in no uncertain terms, “these actions constitute Change.org profiting from the death of Black people.”

Betches asked Change.Org to address concerns about how donations through their website are solicited and distributed. When asked how the company uses donations made to specific petitions, a Change.Org spokesperson said via email: “People who sign petitions on Change.org are offered the opportunity to pay for Change.org to promote the specific petition they care about to the 100 million people who visit Change.org every month,” adding that contributions are “invested into tools and support” they offer petition starters.

Even though the Justice for George Floyd petition does not redirect users to an invitation to chip in after signing anymore, that prompt does still appear when you sign other petitions—for example, this one calling for Juneteenth to become a national holiday. Now, at least, it clarifies what the money will be used for.

It remains unclear why Change.Org has to pay itself to promote its own petitions on its own website. Asked what efforts Change.Org has made to ensure transparency when it prompts signers to make a donation, a spokesperson told Betches:

On the payment form, we explicitly state that by promoting a petition, users are advertising the petition to other users on Change.org, and we’re proud to show promoters the number of people who will see the petition because of their promotion. The more promotions that a petition receives, the more people are exposed to that petition, and the more signatures it is likely to receive. And the more signatures a petition receives, the more likely it is to have impact in the world because of that support.

If Change.Org uses donations to fund promotion of its petitions for racial justice, rather than racial justice itself, it’s worth considering how successful petitions can be. While they are certainly helpful in increasing public pressure and raising awareness—when millions of people signal support for a cause, it’s a pretty good hint to politicians they will lose their jobs if they don’t accommodate demands—most petitions are not binding. Yet many suggest that hitting a certain goal will automatically result in the requested action.

The “goals” that go with each Change.Org petition are actually fairly arbitrarily. According to Change’s website, “Change.org supplies a default petition goal when you start your petition, and once you near the signature goal, it will increase automatically… Once you have achieved the goal behind your petition, you can declare Victory regardless of what the signature count is or how far you may be from the goal listed on the petition page.”

This basically means that with increasing popularity and engagement, the site’s algorithm automatically pushes back the petition’s goal. That means the petition continues to stick around to generate more signatures (and more money for Change.Org) after the initial goal is reached, and it’s up to the individual who started the petition to cap or change it.

None of this is to discount the importance of petitions or the tech infrastructure often required to manage tens of millions of users who want to sign them. Still, it is crucial to consider where petitions come from and who they go to. At the bare minimum, they can raise awareness for different causes. When they are most successful, they provide the necessary amount of public pressure needed to push officials to make a change.

A Change.Org spokesperson said the company is honoring requested refunds as quickly as possible and added that they have solicited feedback from users about their understanding of, and satisfaction with, how their donations are used. When asked how much money the “Justice for George Floyd” petition has earned the company, the spokesperson said Change.Org planned to announce how those contributions “will be used to drive impact on this petition and support issues of racial justice, very soon.” We will look forward to that.

In the meantime, if you’re looking for alternatives to Change.Org, ColorofChange.Org is a Black-owned and -run nonprofit that fights for racial justice. They host petitions and amplify the voices that matter the most in these conversations. If you do sign a Change.Org petition and would like to donate money specifically address racial justice, check out some of the groups in our Good Influence Fund.