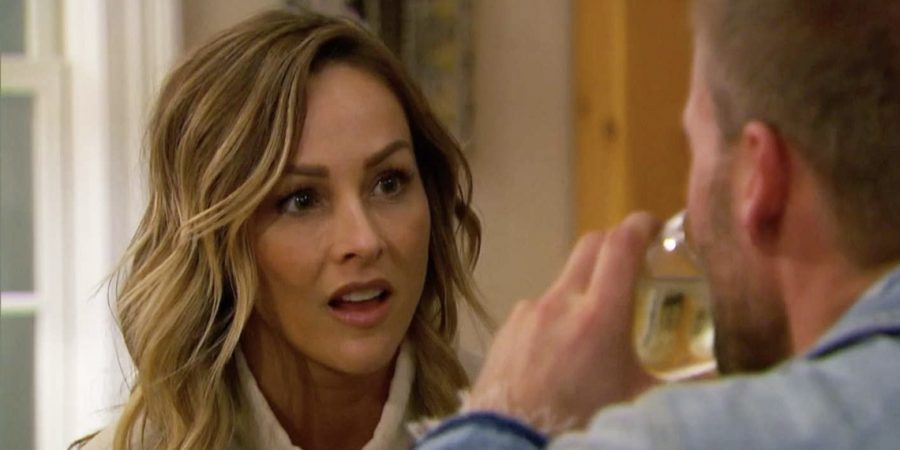 Aaaand we’re back with another installment of The Bachelor Winter Games, where hot people who were crazy enough to go on The Bachelor from around the globe finally get another chance at  love. The drama was high this week, which makes sense. I’m always a huge bitch when I’m cold.

We kick off the ep with an announcement from Yuki, who still does not speak English but does appear to be learning certain key phrases.

Yuki: I get date card please!

Chris Harrison: Which means Dean would be going on a date?

Yuki: No, Dean has too many girls.

Translation: I am not here to be played. I saw what happened to Kristina. I didn’t understand it, but I saw it.

Lesley (internally): Did Yuki just shade me in broken English?

The Bibi-Kevin-Ashley I love triangle of last week has been fully replaced with a Clare-Benoit-Christian love triangle. These people really waste no time.

Clare: Benoit is so dang nice!

Everyone gets on their speed skating gear and I can’t help but notice Ashley I is the only one who was issued a pair of earmuffs.

*The women all immediately scope out their dicks*

Josiah, once again, has to save Ally from her complete lack of athletic ability.

Josiah: I’d better get a piece of dat ass considering how much I’ve had to save it.

Once again, the Canadians are better at ice skating than the Americans.

Me: That’s racist against Americans.

Chris Harrison comes in hot with another epic twist: It’s not the winners of the qualifying round who get to advance to the final…it’s the losers!

Me: They should call this the Bachelor Winter MIND Games, amiright??

Everyone in the room after I made that joke:

TBH, I’m just confused because shouldn’t Stassi be like, a thousand times better at winter sports? Like I get Ashley I being terrible, but Stassi is from Sweden. The ice is in her blood!

Christian the sad German has figured something out that no Bachelor contestant before him has ever pieced together: Even if you don’t get a date card, you can just make a date with people around the house.

Christian: We have kitchen. We have jacuzzi. I’m DTF anywhere.

Christian and Clare agree to meet up in the jacuzzi later and my heart pre-breaks for poor Benoit. I knew a Canadian with glasses would never make it in this cold, cold Bachelor world.

Back to the game: Dean and Stassi take home the gold, meaning Lesley and Luke are def getting dates. Boooooring.

Me: Aww Dean should pick Lesley! They’re so sweet.

Other random thought coming out of the first challenge: Stassi looks like that woman who had plastic surgery to look like a cat. I’m not saying she’s not pretty, but it’s true. They look similar. Put it on my tombstone.

Back At The House

Everyone comes home to a random man in the house. In most situations this would lead to a 911 call, but this is The Bachelor so everyone’s just like “whaddup.”

Now we meet Jordan, a former Bachelor from New Zealand, who rolls in hot with a joke about how he was late because of the travel ban. Two things here — 1) Bold move to dive right into American immigration politics within .5 seconds of your appearance, and 2) Silly goose, the travel ban isn’t for white people; everybody knows that!

The show wastes no time signaling to us that Jordan is shady as fuck, and is hiding an even shadier New Zealand past.

Jordan: I had a very tricky season.

FINALLY they tell us what Jordan did. Are you ready?

When he was the Bachelor….

Me Upon Hearing This News:

Jordan flipped a coin to choose who his wife would be, which was kind of what I already thought they did, but this is apparently a huge deal to everyone else in the house.

Stassi decides she’s going to go talk with Jordan The Coin Flipper because she wants to make sure she’s gotten to know everyone.

Stassi and Jordan’s chat is interrupted by what I believe to be The Bachelor’s first ever man-on-man “Can I steal you for a sec?” I never thought I’d live see this day.

Everyone is interrogating Jordan about this coin flip, and I’ve never seen Bachelor people so serious about anything in my life. (Casual reminder that there were discussions of consent and racism on the last seasons of BiP and The Bachelorette last season.)

Ben: Flipping a coin is crazy!

Jordan: I mean we’re on The Bachelor so yeah shit is crazy.

Suddenly, out of nowhere, Ashley I and Hot Canadian Kevin are thing, and Bibiana is totally out.

Kevin: So you went on two seasons of Paradise?

Ashely: Oh boy, did I ever.

Ashley I immediately imagining introducing Kevin to her parents as her boyfriend after one flirty conversation is me every time a guy on the subway blinks near me.

*.2 seconds after Kevin tells Ashley I he’s into her*’

Ashley I: I am in love with Kevin.

Despite the fact that earlier, Clare had agreed to meet Christian the sad German in the hot tub, she’s decided taking a bath with Lesley (Who is fully clothed?? What’s going on here??) is a better idea.

Lesley thinks Dean is too young, so I guess he’s officially the Bekah M of this season. Or is Bekah M the Dean of her season? Hmm…

Lesley: I need someone who is not just a pretty face

Dean: You are also pretty.

To be fair, if I saw Dean I would probably say “YOU’RE PRETTY” without even realizing it, and if Dean told me I was pretty I would likely experience a spontaneous pregnancy.

Back At The House

Oh god it’s happening — Benoit is catching on that Clare is playing him, oh God — this is worse than all those times Seth Cohen embarrassed himself in front of Summer on The O.C.

Benoit goes from zero to 60 really fast and and it’s turning my opinion of him. He’s fully crying within five seconds of their conversation and it makes me feel like he’s just a sad boy who guilts people into dating him.

Benoit and Clare start arguing about the exact number of kisses the two of them shared (ew) and I can’t help but feel like the foreign bachelors are way too intense about kissing. I’ve literally kissed people I’ve never seen before or since. Is kissing a huge deal outside of the US? Are Americans whores?

Benoit the starts listing the entire week’s worth of memories he and Clare have shared.

At this point, my opinion of Benoit has fully flipped. He now reminds me of every guy I’ve ever gently rejected who turned around and acted like I ruined their life. I mean, I did ruin their life, but still.

Benoit, in what it is obviously an attempt to get Clare to freak out and be his girlfriend, announces that if he can’t have her, he can’t have anyone, and that he’s leaving.

In one final sad boy move, Benoit announces that it is, in fact his birthday.

The moment the door shuts on Benoit, Clare is out here trying to find Christian, who is still insanely pissed that she went back on her word about the jacuzzi. I’ve never been as mad about anything as Christian is about being denied jacuzzi time.

Christian: In Germany when we say we’re going in a jacuzzi, it is a DATE!!!

Christian is also now back on the whole “you’ve kissed other guys thing,” and I can’t help but feel like Clare is just vacillating between the two worst types of guys: prosessive agro asshole, and possessive sad boy asshole.

Clare: Who I’ve kissed is none of your business — I owe you nothing.

Me, Gloria Steinem, Susan B Anthony, and all our foremothers before us:

Christian: I would never kiss a woman who was interested in other men!

Also Christian: has been in three versions of The Bachelor in three different countries

The guys get the roses this time around, which means the rose ceremony is back to normal…FOR NOW.

Out of nowhere, Tiffany is insanely upset that Ashley I is with Kevin now and I’m like…who the fuck is Tiffany?!?!?

Dean uses Lesley’s middle name when giving her the rose to prove that he has been paying attention. Maybe he is a reformed fuckboy after all?

Ben — who as far as I can tell has still not talked to anyone the entire season — and he uses his to save Yuki. God Bless him. You are truly the People’s Bachelor.

Luckily, Tiffany gets a rose from Michael, another person I’m fairly certain has not been on the show before this moment. Who are you Michael? Where did you come from? You were on Rachel’s season? When?

Clare: I don’t know if I would take Christian’s rose

Clare: *Two seconds later* I will absolutely accept your rose

By the end of all of this, Rebecca and Jenny are out.

The tag at the end of the episode is once again Yuki who reveals that she loves ketchup by saying things like “yes ketchup good” and “much ketchup!”

Moral of this week’s episode: Don’t count your foreign boyfriends before they hatch.