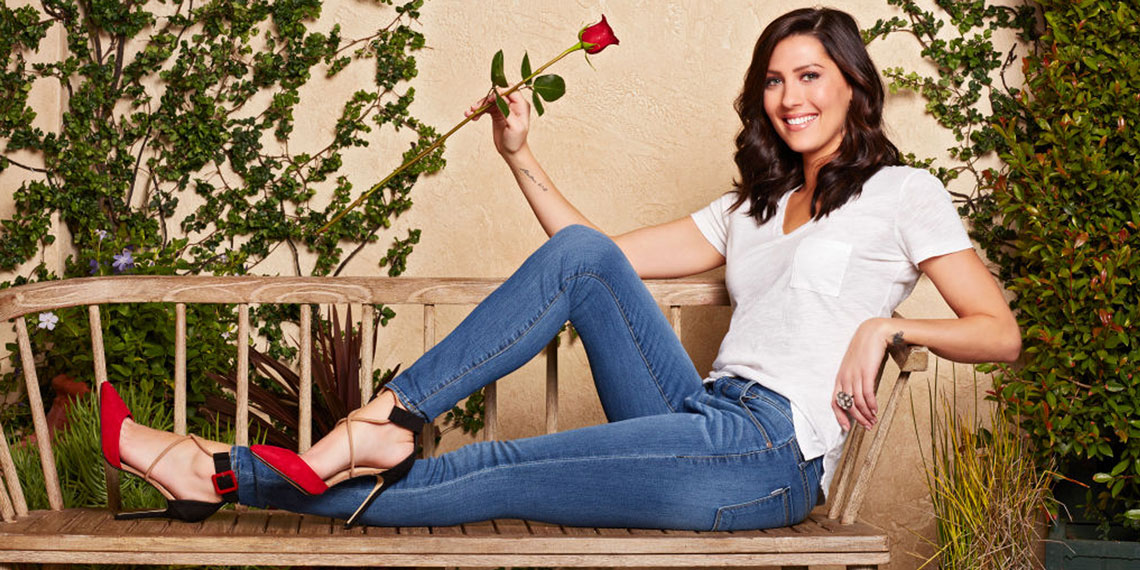 The Bachelorette season premiere is nearly upon us, and there’s a lot we can already expect from Monday night’s episode. For one, Becca will say the words “let’s do the damn thing” no less than 12 times in the span of 120 minutes. It’s my personal recommendation that you turn that entire phrase into a drinking game to make it bearable. Just be careful not to die! We should also expect Arie and Lauren to drop another irrelevant wedding-related announcement before the opening credits clear the screen, lest they give Becca one goddamn minute to shine. But mostly we can expect that Becca will be testing my fucking sanity with her outfit choice. I think we can all confidently say that Becca was not our first choice for the Bachelorette (SEINNE, YOU WERE ROBBED), but I’ve personally been questioning ABC’s decision-making skills after watching Becca dress herself these past few months. I don’t know if it’s something in the Minnesota air or if she’s just high off of Arie hate-tweets, but she’s definitely feeling some sort of confidence about her Bachelorette style that is 100 percent unwarranted. And who would I be if I didn’t shed some light on her v flawed style choices? So, follow me, as we journey through Becca’s most heinous fashion choices to date.

Let’s start with the least offensive garment she’s worn as of late: her Bachelorette premiere dress. Now, usually the Bachelorette wears red on night one, but Becca is making it clear here that OVER HER DEAD BODY WILL SHE BE LEAVING WITHOUT A GODDAMN FIANCE. At least, that’s what I’m assuming she was trying to say with this bedazzled wannabe bridal gown. I mean, is it smart to start off a first date with desperate marry-me vibes? Then again, Ashley I did teach us that acting like a psycho from the get-go might actually land you a man after he goes through literally every other woman first, so maybe it’ll work out for Becca? IDK. Though I don’t hate this dress with every fiber of my being, I’m definitely underwhelmed by it. It just doesn’t say “I’m ready to play with the hearts and emotions of 20 men” like I was hoping it would. That’s strike one, Becca!

2. The After The Final Rose Dress

Words can’t express everything I’m feeling tonight, but I’m so grateful for the love, support and well-wishes. I’m beyond excited for this next chapter of my journey and to have shared the start of that all with you tonight. Now we’re doing the damn thing ????

So I know I’ll probably catch shit for this one in the comments section, well FINE. I’m still going to talk shit about this dress because principles. Becca wore this number during “After The Final Rose”. Not only was this the night she got to confront her ex, but also she met a few of her new suitors, and she chose to wear… this. The dress itself is fine. I mean, I make it a rule not to borrow outfits from my grandmother’s swing parties, but to each their own.

It's the moment of truth for Lauren B. and Becca K.! #TheBachelorFinale

You have to think that the moment she walked down that hill wearing grandma’s gala dress, Arie took one look at her and knew he’d be sliding into Lauren’s DMs later. Tbh I don’t really blame him. First of all, wearing black lace over a cream overlay is a fucking crime against humanity and my eyeballs, and should be punished as such. Did she not know that the finale would be a live televised event in which I, and all of America, would be judging her from the comforts of our couch and sweatpants? Did she?? And if she thought I would take it easy on her just because I have queso stains on my PJ bottoms, am wearing a Buffy The Vampire Slayer shirt, and have literally no room to talk about style, she should have thought a-fucking-gain. Also, the goal here is to make the Bachelor want to marry you, to be so enraptured by your presence that he forgets he’s been banging another chick all week. Somehow I don’t think this prom dress she found in Deb’s clearance section makes the cut.

I know, it’s like you want to look away but you just… can’t. When this abomination first graced my screen, I thought it was a practical joke. No way would ABC, a company that invests millions of dollars into the production of The Bachelorette, would allow the star of this season to promote the show dressed like she shops exclusively in Macy’s teen section. There’s just no fucking way. AND YET here she is wearing that disgusting lace jacket that’s making me question what the hell is going on in Minnesota for her to think making this her fashion statement was okay.

So hopefully in these next 10 or so weeks, Becca gets a new stylist who does not have a personal vendetta against her. I can only assume that’s what’s been going on. I’ll see all you betches every Tuesday, where I’ll be recapping The Bachelorette and hopefully not shading Becca’s every wardrobe choice. I just want the best for Becca, and that includes a wardrobe that does not solely consist of 2004’s greatest fashion hits.