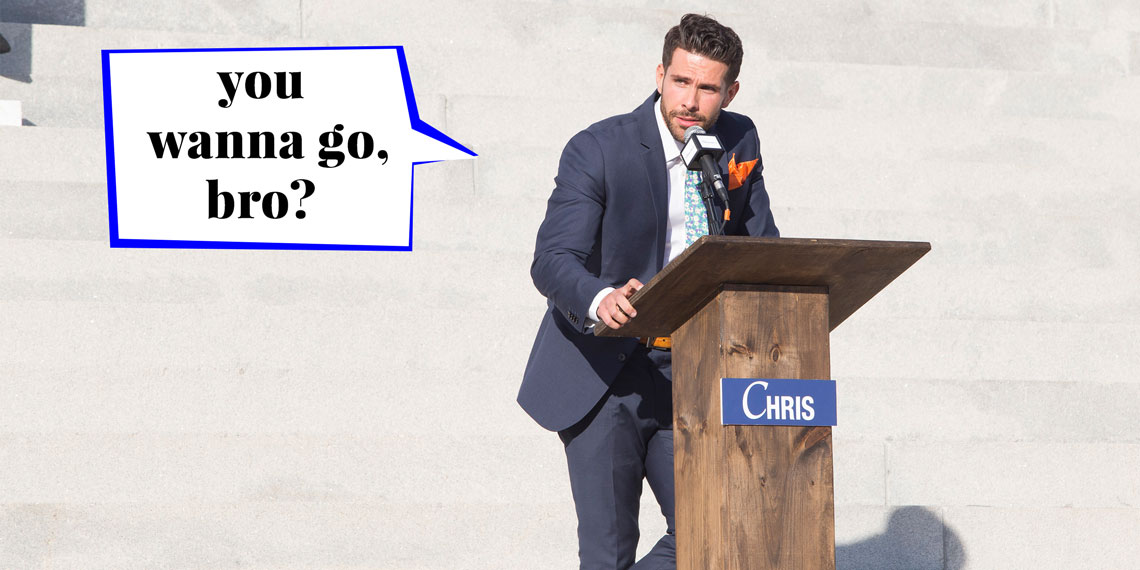 Here we are once again, ready to be assaulted by 80’s cabana wear and oversize sequins, courtesy of lil miss next door Midwest and her stylist, who is out to get us all. Our regular recapper is on vacation, so you’re stuck with me this week. Cry about it in the comments. Anyway, this week, the financially unstable ABC is whisking us away to scenic, exotic RICHMOND, VIRGINIA. That’s right—Virginia is for lovers, and Virginia is all this show can afford! It’s like Utah, but with less natural wonder and more hate crime. What a place.

We get a great intro piece as Becca frolics through a big L-O-V-E sign, only slightly struggling with the spelling.

Becca’s search for L-O-V-E takes her to Richmond, Virginia! ❤ #TheBachelorette

Becca meets up with Messy Bitch Chris Harrison, and they giggle on a pink couch about how Becca is already planning her wedding. Sounds healthy!

As Becca has some much-needed girl talk with Chris, the guys are ECSTATIC about Richmond and this boutique hotel they’re checking in to.

“Just like Virginia birthed decades of slavery the nation, I hope it births love with Becca.” – Leo ManBun

Chris reminds us that he’s still a psycho, and picks the most underwhelming fight I’ve seen since 5th grade with Famous Floor Shitter, Lincoln.

Sometime during this riveting conversation, Jason gets the first one-on-one, and yet Chris STILL finds a way to try to make it about himself. He basically says to Jason, “I’m happy for you and I’mma let you finish, but I’m bout to have the best one-on-one date OF ALL TIME!”

It’s about this point that my husband begins insisting that Jason is the poor man’s version of that guy from 10 Things I Hate About You. He proceeds to Google search that shit and damn, he’s right.

Jason was great in 10 Things I hate About You. #TheBachelorette pic.twitter.com/MfZhglUYng

Jason and Becca’s date consists of wandering around town, sippin’ Champagne on a private trolley so as to survey the Confederate monuments and alley crack deals from a distance. Have the producers ever BEEN to Richmond? The happy couple heads to an old church, which is kinda like what I just did in Bordeaux except this church is only about 100 years old, has little to no historical significance, and is v underwhelming. They then head to a museum dedicated to Edgar Allen Poe, which is essentially a testimony and monument to a man that died of alcoholism and loneliness—the same fate waiting for about 60% of the viewers of this show. I see you, ABC.

Outside the Poe museum are a group of the goth kids from high school that no one talked to. This is apparently an “unhappy hour” where everyone looks aggressively bored and shoots death glares at Jason and Becca for daring to laugh and express joy. Whose idea was this?? Was this date planned by April Ludgate?

After dedicating far too many minutes to dead things and weirdos, Becks and Jason head to a hipster bar in the white part of town. The producers—er, Becca—has somehow convinced Jason’s friends to come so she can grill them about any weird sex habits really get to know him better. Then it’s time for dinner at the train station, and I always think it’s funny how they choose a giant venue for these one-on-one dinners and end up only using a small corner of the room and not eating anything.

Jason shares a sob story about his grandma who had Alzheimer’s and, naturally, snags the rose. Becca one-ups his story with one about her dad dying and Jason is all, “thanks for sharing that.” It feels like he just thanked her for participating in show-and-tell at an elementary school and not like, revealing how she watched her dad take his last breath. Becks then makes an eloquent speech and says Jason has “all the best characters I’ve ever met in a man.” I’m gonna leave that there.

As they kiss on the balcony, the camera pans to the street below, full of no less than 10 cop cars. Ah, Richmond. Was it a triple homicide? Crack deal gone wrong? Hate crime? Just another night in this scenic city.

Becca is taking her group of miscreants to the capitol building. George Washington AND Abe Lincoln are there and YOU GUYS, seems like the budget is NOT a total loss this season!

It’s time for Beccalection 2018—which is basically just making all the guys stand at podiums on the steps of the capitol and declare how much they love a woman they just met. Really, not diff than regular politics. Thank god their names are on said podiums, because I still can’t keep track.

Suddenly, the governor of fucking Virginia appears. I’m sorry—did he have nothing else to do? How much did ABC pay this man? Again—I’m starting to understand where the budget went this season.

Lincoln starts playing dirty and starts picking at Chris like I’m currently picking at my poison ivy rash (I thought I was immune!). Chris fires back and everything gets real awkward. Pan to the audience of middle-aged white women who all share the same facial expression, which says “Do we clap, or, IDK, WTF DO WE DO? Shit! Help!”

Is Chris really hashing out his fat kid probs in front of His Majesty, The Governor? How dare he! The governor looks v upset and his whole day is prob ruined. I’ve gotta say, though, that the weirdest part about this entire group date is how Becca is asking NONE of the questions in this panel that is literally ABOUT HER. Actually, kind of a metaphor for the current American political system. Carry on.

Oh well, time for a cocktail party at The Haunted Mansion!

For her outfit this evening, Becca goes for a pared-down black jumpsuit and—oh, she sneezed into some glitter sparkles and is now covered in glitter sparkles. Bless you, sweetie.

The arguments continue because Becca tells Chris that Lincoln was talking shit and Chris is all, “OH NO HE DIDN’T” and we’re in fucking middle school. Their conversation breaks down exactly as follows.

Garrett gets angry because he loses out on five minutes with Becca and GARRETT SMASH! tells Lincoln and Chris to grow a pair and STFU. Can anyone tell me what this fight was even about in the first place?

Also sorry, but where TF has Connor been this whole time? I literally just noticed him. Is he new? Also, is Wills consistently high or does he just have crazy facial expressions? Wills has been talking this entire episode like somebody turned his volume knob down to 3. Has anybody else noticed that he is barely audible?? I am not here for it.

Becca goes with her puss gut and gives the rose to Colton. Garrett sad.

Yo, I love Leo. He’s the most down-to-earth one here. Let it be known. Next Bachelor, right there. Leo snags the next one-on-one, probably because Becca wants to talk about his hair care routine. As they fly in a helicopter overlooking plantations and other monuments to slavery, Becca starts feeling sad about how the guys aren’t getting along. She immediately starts in and gushes about this shit to Leo, and, like, this isn’t fair to Leo, Becks.

The shitty date continues in a muddy bog where Becks and Leo dig for oysters. Sidenote: This isn’t SHUCKING OYSTERS. Shucking is when you put a knife in the oyster, try not to stab yourself, and pry it open. The more you know.

Cut to the evening portion of the date, and OH BOY THE SEQUINS ARE BACK! Gosh I missed them. This dress is really great, what with the black netting down the middle. Are they going to Club 54?

Leo tells a sad daddy and baseball story and, while not quite as sad as Jason’s Alzheimer’s story, it still earns him a rose. Is past family trauma a requisite for being on this show? I wonder if that’s a question you have to fill out in their giant questionnaire. Anyway. Leo and Becca head to a concert given by someone I’ve never heard of, and they have to pretend to be excited to see this guy who probably was performing open mic nights at the local bar like, two weeks prior to filming.

After Becca’s endearing mom dancing, we cut to Chris writing what I assume is a suicide note, or at the least a very sad handwritten book. More and more throughout this episode, Chris decides to lean into his Crazy Eddie persona. It is terrifying. Chris seems like the type of guy that would get mad at you because a guy friend liked one of your Instagrams. He needs to go.

Chris shows up at Becca’s hotel, and you can tell she’s laughing to cover up the fact that she is likely pants-shittingly afraid.

Becca opening the door to Chris was eerily reminiscent of this other time she opened the door to a surprise visit from someone she can’t stand #TheBachelerotte pic.twitter.com/zuhCAJIDHF

After a really spectacular convo, Becca tells Chris they’re not going to find love in this hopeless franchise. Well, Chris, your plan backfired spectacularly. It’s almost like asking for constant reassurance that your fake girlfriend likes you is not an attractive look?? Hm. Color me shocked. THEN, after all that, he tries to insist he doesn’t need Becca to walk him out, which is basically the equivalent of every guy who slides into your DMs and, after telling him you have a boyfriend, is all “fuck you bitch, you’re ugly and I never liked you anyway.” BOY, BYE.

Once again, Becca cancels the cocktail party because she got drunk alone in her room and picked out another sequin dress. Unsurprisingly, Lincoln gets the boot and so does Connor, who, again, I literally didn’t remember existed until this episode. (But I would still like a moment of silence for him and his glasses, which were the best part of this episode.) Anyone else think it was weird that Connor got an exit interview and Lincoln didn’t? What did Lincoln say? Did it get cut? Release the tapes!